A rising hunger among children 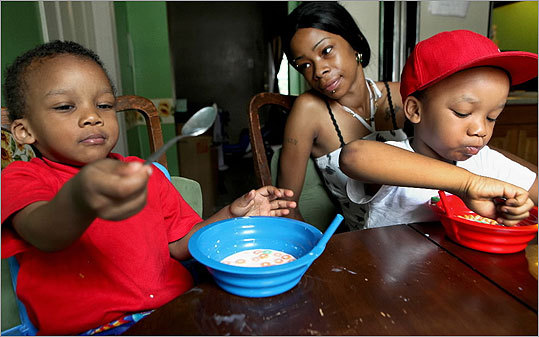 Doctors at a major Boston hospital report they are seeing more hungry and dangerously thin young children in the emergency room than at any time in more than a decade of surveying families.

Many families are unable to afford enough healthy food to feed their children, say the Boston Medical Center doctors. The resulting chronic hunger threatens to leave scores of infants and toddlers with lasting learning and developmental problems.

Before the economy soured in 2007, 12 percent of youngsters age 3 and under whose families were randomly surveyed in the hospital’s emergency department were significantly underweight. In 2010, that percentage jumped to 18 percent, and the tide does not appear to be abating, said Dr. Megan Sandel, an associate professor of pediatrics and public health at BMC.

“Food is costing more, and dollars don’t stretch as far,’’ Sandel said. “It’s hard to maintain a diet that is healthy.’’

The emergency room survey found a similarly striking increase in the percentage of families with children who reported they did not have enough food each month, from 18 percent in 2007 to 28 percent in 2010.

Pediatricians at hospitals in four other cities - Baltimore; Little Rock, Ark.; Minneapolis; and Philadelphia - also reported increases in the ranks of malnourished, hungry youngsters in their emergency rooms since 2008. But Boston’s increases were more dramatic, said Sandel, a lead investigator with Children’s HealthWatch, a network of researchers who track children’s health. Researchers said higher housing and heating costs in Massachusetts probably exacerbated the state’s surge.

BMC has also seen a 58 percent increase, from 24 in 2005 to 38 in 2010, in the number of severely underweight babies under the age of 1 who were referred by family physicians to its Grow Clinic, where doctors provide intensive nutritional, medical, and other services to boost babies’ growth. Such malnourishment is similar to what is more typically seen in developing countries, Sandel said.

Among the children treated at the clinic last year was Jordan Turner-Goode, who at age 1 weighed just 19 pounds, while the average child that age is more than 24 pounds.

“We were living in a hotel in Chelmsford at the time, and it was hard to cook meals because all we had to cook in was a microwave and that wasn’t helping his weight at all,’’ said his mother, Janell Goode. “He was eating cereal, noodles, and eggs in the microwave and hot dogs and fruit snacks.’’

The 27-year-old single Lowell mother, a former telemarketer who is now unemployed, relies on food pantries and other public assistance to feed her three young sons.

Jordan is a healthier weight now, but Goode says it is still a struggle. The family managed to move out of the state-subsidized motel where they were living, but their housing situation is precarious. The owner of the Lowell apartment where they are renting is about to be foreclosed on, Goode said.

Children’s HealthWatch monitors very young children, like Jordan, because their bodies tend to be more vulnerable to changes brought on by a recession. Chronic hunger during toddler years, when young brains are still growing, can negatively affect learning and psychological, social, and a raft of other skills, said Rafael Pérez-Escamilla, professor of epidemiology and public health at the Yale School of Public Health.

While the nation’s spotlight has been trained on the other end of the spectrum, the problem of childhood obesity, Pérez-Escamilla and other researchers report evidence that early hunger may be linked to later obesity.

Some studies have found that young children who grow up with not enough to eat can become overweight or obese adolescents and adults, though the link is not firmly established.

Health advocates say another sign that families are struggling to feed their children can be found in the steep rise in the number of Massachusetts residents, like the Goodes, relying on food stamps. The numbers nearly doubled, from 452,000 in 2007 to 815,000 in May, the latest available data.

Advocates estimate that there are tens of thousands more Massachusetts residents who are eligible but have been stymied by the complex enrollment process.

“We believe a lot of them are families with kids,’’ said Pat Baker, a senior policy analyst with the Massachusetts Law Reform Institute, a legal services nonprofit for low-income people.

A decade ago, Massachusetts ranked nearly last nationally for signing up its eligible residents, but after a concerted push by the state and health advocates, it is eighth, said Julia Kehoe, commissioner of the Department of Transitional Assistance, which runs the food stamp program.

Kehoe attributed the rise in enrollment to the state’s outreach, coupled with the recession. Without that campaign, she said, the number of hungry, malnourished children in BMC’s emergency room would have been “much worse.’’

The flood of people signing up for food stamps has eased since 2009, Kehoe said, but several thousand residents are still signing up each month and there are probably thousands more who are eligible that staff has been unable to reach.

She said her department is working to streamline the enrollment process.

Kehoe said she is concerned because the state’s federal stimulus money ran out in June, funds that were used to help defray the cost of signing up new families for food stamps.

The state recently increased its spending to cover more than half the shortfall, but it probably will not be enough, she said.

“We will have effectively fewer staff at the end of the year then we do now,’’ Kehoe said. “The state is doing what it can, but there are just so many other public safety and human service needs out there right now.’’

Staying safe in the water