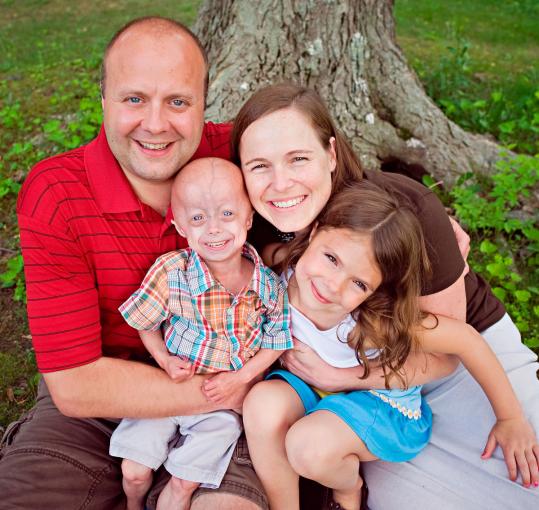 It starts with a tiny genetic change, the equivalent of a single spelling error in the vast DNA manuscript that supplies the narrative of human biology. But for babies born with that errant genetic code, childhood becomes a race against traits more commonly associated with their grandparents. The children age rapidly, resembling octogenarians before they even become teenagers.

They lose their hair, develop osteoporosis, and ultimately suffer strokes and heart attacks during adolescence.

Yesterday, a research team that includes Boston scientists and the director of the National Institutes of Health announced that they had used an old drug in a new way, performing laboratory experiments that suggested the medication might prevent the hallmarks of premature aging in children stricken with the rare, uniformly fatal disease called progeria. It’s still early research, but the result has electrified families of children with progeria.

Already, doctors at Children’s Hospital Boston, who have seen more than half the known progeria patients in the world, are planning the largest clinical trial yet based on the findings.

“I am a glass half-full person, but for a parent you can’t go fast enough,’’ said Dr. Leslie Gordon, an associate professor of pediatrics at the Warren Alpert Medical School at Brown University, who abandoned plans to go into ophthalmology when her son was diagnosed with progeria in 1998. Instead, she helped found The Progeria Research Foundation to support research into the disease, known to afflict 80 children worldwide, and began amassing the world’s largest collection of tissue samples from patients and family members.

The new result is the continuation of a story with deep local roots that weaves together genetics, families who unite to push science forward, and a heartbreaking disease that seized the attention of doctors and scientists as it became clear that helping these children could provide powerful insights into normal aging.

In many ways, children with progeria, formally known as Hutchinson-Gilford progeria syndrome, live completely normal lives. They play, think, and act just like other kids their age. Such is the case with Gordon’s son, Sam, a 14-year-old who just graduated from eighth grade.

Because of a single mistake in the six billion letters in the genome, children with progeria accumulate too much of a protein called progerin in their cells. They develop bone and skin problems before their first birthday. They are smaller than their peers and have so much trouble keeping fat on their body that veins on their foreheads become visible. They suffer from the same cardiovascular problems that kill many adults and live, on average, to be only 12.

“Every medical student knows about this disease. Old age when you’re 10 is a striking image,’’ said Dr. Mark Kieran, director of medical neuro-oncology at Children’s, who leads clinical trials on the disease. “And because heart attacks are such a common cause of death, it’s hard to look at these young, frail little kids that look like they’re 70’’ and not see parallels.

In fact, there’s increasing evidence that progerin also naturally accumulates in cells as people get older.

The closely entwined connection between aging and the disease is especially apparent in the new research, published yesterday in the journal Science Translational Medicine.

Dr. Dimitri Krainc, an associate professor of neurology at Massachusetts General Hospital, normally studies diseases that ravage the minds of adults — including Parkinson’s and Huntington’s disease. His lab has been focused on understanding how the trash-removal systems of cells go haywire as people age, allowing debris to build up.

A few years ago, Krainc approached Dr. Francis Collins, a geneticist who first treated a young woman with a disease closely related to progeria three decades ago when he was at Yale. Krainc wondered if the approaches he was interested in might apply to the childhood aging disease, too. Collins, now director of the NIH, had led one of the teams that discovered the genetic spelling mistake that causes the disease in 2003 and later became intrigued by a drug called rapamycin, a transplant rejection medication shown in a dramatic 2009 study to significantly lengthen the lifespan of mice.

When the scientists administered the drug to the cells of progeria patients in a laboratory dish, it removed the progerin protein in cells.

The characteristic bulging of the control center of the cell, the nucleus, went away. Kieran, who was not involved in the research, said there are plans to try a related drug in 65 children with progeria.

In an interview, Collins said that many of the broad themes that have become important on a national level — translating the molecular understanding of disease into ways to help patients, and repurposing old drugs against different diseases — were parts of the new work.

“We learn over and over again that the study of rare diseases can shed light on common problems in ways that are maybe easier to reveal when you’re looking at a dramatic consequence in a rare disease,’’ Collins said.

For parents like Stephanie Howard of Stevensville, Mich., it offers a powerful sense of hope. Her son, Cam, is like other 4-year-olds in so many ways — he goes to preschool, loves to watch his dad mow the lawn, and his parents are about ready to take the training wheels off his bike.

“I think people would think, ‘He’s aging, he doesn’t have the energy or cognitive development of other kids,’ ’’ Howard said. But the truth is, she said, her son’s energy and abilities are a constant marvel.

“We’re hopeful that [the new research] has the potential to lead to some treatments for Cam and other children with progeria.’’