A campus is moved by student project 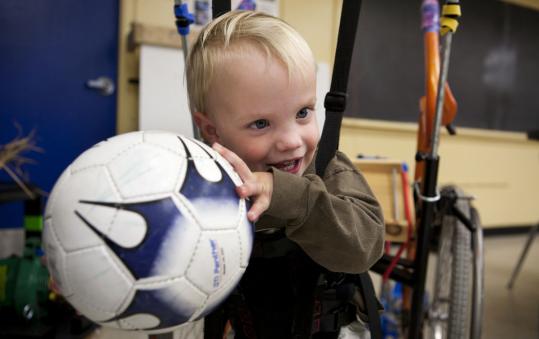 "It's really opened up his world, and allows him to be a 2-year-old boy,'' says Dianne Borton, Luke Seston's physical therapist, on the customized walker created by Concord Academy students for the toddler. (Kayana Szymczak for The Boston Globe)
By Jennifer Fenn Lefferts Globe Correspondent / June 16, 2011

Using parts from a donated wheelchair and funds raised by the school’s community service club, a group of student inventors at Concord Academy have built a custom walker for the son of a couple who live and work on campus.

Members of the school’s DEMONs (Dreamers, Engineers, Mechanics, and Overt Nerds) club have dubbed their handiwork Luke’s Skywalker, after the 2-year-old son of Tim Seston and Sally Zimmerli. Luke Seston has cerebral palsy, a condition that makes it difficult for him to stand up or walk on his own.

Now thanks to former student Gordie Slater, who donated the wheelchair, the community service club’s fund-raising efforts, and the ingenuity of the DEMONs, Luke is better able to keep up with his twin brother Owen, play soccer, and even ride around on a scooter.

“We opened up his life into the community and the kids here have responded,’’ said Seston. “It allows him to be pretty social and happy.’’

The walker is a hodge-podge of equipment that was put together to help Luke develop strength in his leg muscles and give the inquisitive boy some much-needed independence.

“It’s a really good feeling,’’ said senior Alex Moskowitz, who lives in Carlisle. “It feels like you’ve really accomplished something. It was amazing.’’

Diane Borton, a physical therapist for the early intervention program at Minuteman ARC in Concord, said the walker has made a big difference in Luke’s development. The walker provides the support he needs and keeps his hands free.

“It really opens up his world, and allows him to be a 2-year-old boy,’’ Borton said. “This is really big for a little guy to feel some independence. It’s been a great thing for him.’’

The idea for the students to build a personalized walker with a suspension harness to support Luke came about when the family’s insurance company would not cover a walker that doctors said could play a big role in his therapy.

Zimmerli, a teacher, and Seston, who works in admissions, live on the academy’s Main Street campus with their twin boys and 6-year-old son Charlie. Luke was 1 when he was diagnosed with cerebral palsy, a neurological disorder that affects body movements and muscle coordination.

“We noticed at eight months when Owen was crawling around and Luke wasn’t,’’ Zimmerli said.

She said Luke’s arms and legs are tight, with his legs always extended and arms typically in a curled position.

Seston and Zimmerli took him to a neurologist and he started getting additional therapy through early intervention. They also met with an orthopedist and physiatrist, a doctor of physical therapy, who made several recommendations to help Luke develop stronger arms, legs, and core muscles so that he would be able to lead a more normal life.

They recommended braces to keep his feet from “scissoring,’’ and a vest that would give him support and stability. They also said that it would be best if Luke was on his feet for at least two hours each day, Seston said. All of Luke’s muscles work, but the brain’s connection with the muscles doesn’t function properly, he said.

“Without the practice, his muscles and bones won’t work as well,’’ Seston said. “The doctor said, ‘We’d like him to stand for two hours a day to strengthen the muscles.’ My question was, ‘How do you do that?’ It’s back-breaking to lean over.’’

The doctors recommended a special walker but the family had maxed out on their health insurance. The recommended walker cost about $1,400, Seston said.

Seston decided to tap into the creativity of students on campus, and approached science teacher John Pickle about his idea to have members of the DEMONs build a walker.

“All of our kids got on board very quickly,’’ said Pickle, the group’s adviser.

Seston and Zimmerli took a video of Luke using a walker at the early intervention center in Concord to give the students a starting point.

The students, however, didn’t just want to replicate the center’s walker. They wanted to design one specifically for Luke’s needs. They used the donated walker as the base, a harness that Seston found on , and other odds and ends.

They worked on the project for about 2 1/2 hours a week for a semester.

“They ended up seeing ways to improve upon it,’’ Zimmerli said.

The walker went through many designs, all intended to give Luke the best support possible, while making it easy for his parents to operate.

The students said they were excited to work on a project that had a direct impact on a member of their school community. Some of their other projects involved building a tricycle to move recycling bins around campus, and a crane for film department cameras.

“Luke is so adorable,’’ said Alex Fichera, a senior from Groton. “The only thing better than building something exciting and new is helping someone at the same time. All of our best projects have had an impact on the community.’’

At the same time, there was a lot of pressure to build something that would be used by a 2-year-old boy, they said.

“This is important,’’ said Attawut Vaniyapun, a senior from Bangkok, Thailand. “We knew we couldn’t make mistakes so we had to be secure in what we were doing. We couldn’t take any risks, because it was Luke.’’

The students said they’ll never forget the unveiling of the Skywalker in front of the entire Concord Academy community.

“It was a precious moment for us,’’ said Vaniyapun.