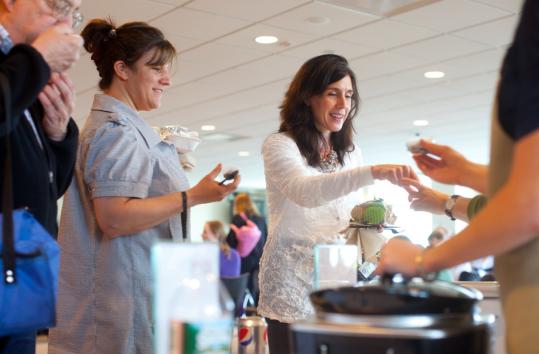 Health Habits Kitchens in Wellesley helps busy workers by offering “affordable, nutritionist-approved meal kits that are ready to be cooked,’’ according to its website. (Erik Jacobs for The Boston Globe)
By Kay Lazar Globe Staff / May 31, 2011

Talk about a tasty perk. Harvard Pilgrim Health Care staffers don’t have to rush home to make dinner; they can get it at work.

Last year, one nationwide survey of employers found that 86 percent intended to “significantly increase’’ wellness and health promotion programs over the next three years.

In Massachusetts, the Connector Authority, the agency that oversees the state’s universal health insurance law, will begin next month to offer a 5 percent premium discount to small businesses that buy wellness programs through the agency.

Notably lacking, however, are rigorous methods for determining whether wellness programs save money and improve health.

In part, the benefits can be tough to calculate because employees who sign up may be more health-conscious than workers who don’t. And much of the research has been conducted or funded by wellness companies that design the programs and have a stake in the outcome, according to a recent report from the National Institute for Health Care Management, a Washington think tank.

It’s hard to know whether any one employer’s program is better than another’s, or if some approaches simply don’t work, because the flops typically are not publicized, said Katherine Baicker, professor of health economics at the Harvard School of Public Health.

Baicker and her colleagues combed through more than 100 studies of employer wellness programs and, after winnowing them down to 22 that specifically measured costs and absenteeism, found that those employers’ medical costs fell about $3.27 for every dollar spent on wellness programs.

Their analysis, published last year in the journal Health Affairs, also found that absenteeism costs fell by about $2.73 for every dollar spent.

But most of the studies did not say how soon after starting their programs the companies reaped the benefits. And they were silent on one major point.

“We should be looking at improving health,’’ Baicker said. “I would hate to lose sight of one of the most important ramifications of wellness programs, which is wellness. The ones we studied couldn’t really answer that.’’

Most employers start by offering cash incentives, such as gift cards, to get workers to complete a questionnaire that pinpoints specific health problems, which helps companies tailor their programs. Most have focused on the basics: smoking cessation, weight reduction, exercise, and lowering blood pressure. Some also provide employees incentives for meeting specific health goals.

Other companies have more elaborate programs.

Harvard Pilgrim offers activities targeted at reducing workers’ stress, from meditation-type mindfulness sessions and classes on managing personal finances to sleep seminars and an organic gardening club that allows employees to dig in the dirt during breaks or at lunch.

The company tries out unusual wellness programs that might work for its customers, and has adopted some that seem to lower its own employee health costs.

“I was amazed at how relaxed you could get in 10 minutes,’’ said Carolyn Georgian, a 46-year-old Harvard Pilgrim sales representative who recently took the sleep seminar. She learned that listening to recordings of the ocean helps her unwind.

Judith Frampton, Harvard Pilgrim’s vice president of medical management, points to a poster in her office showing the tip of an iceberg above the water line. Most companies, she said, mistakenly focus on that tip — employee medical and pharmacy bills — when trying to reduce health care costs.

But that is typically only about 25 percent of a company’s total health costs, she said. The other 75 percent are the costs from ailing workers’ absenteeism or subpar performance while at work, which is often linked to stress, she said.

“It’s the back pain, the fatigue, the headaches that are the cost drivers,’’ she said.

For every dollar that Harvard Pilgrim spends on wellness programs for its employees, it has saved more than $2 in medical and lost productivity costs, said a spokeswoman, Sharon Torgerson.

John Hancock Financial Services is also tracking the return on investment of wellness programs for its 3,673 Massachusetts employees.

Peter Mongeau, vice president of human resources, said the company in 2009 saved $111 in medical and pharmacy costs for each employee who participated in its primary wellness program — over and above what John Hancock spent on the program. The savings jumped to $261 per worker in 2010.

The company used cash incentives — $10 to $50 gift cards — for each employee who completed a health questionnaire and then met specific goals, such as losing weight or quitting smoking.

Overall, Mongeau said, about 40 percent of employees participated in at least one program.

Boston College is just wrapping up its first year of a wellness program, and about 40 percent of its 3,000 employees participated.

Each received $100 for filling out a basic health questionnaire, and the college sponsored free screenings for workers to measure their weight, height, cholesterol, and blood pressure.

“At one of the screenings, one of the employee’s blood pressure was through the roof,’’ said Robert Lewis, associate vice president of human resources. “The nurse said, ‘You have to go to the doctor right now.’ He did, and there is one potential illness that was avoided.’’

The college, one of 10 in a consortium of Greater Boston schools that are launching similar programs, is hoping to eventually realize $3 in health care savings for every $1 it spends, based on the Harvard study, Lewis said.

“I think that at the end of the day we are going to have a healthier workforce,’’ he said. “If we can avoid one or two or several employees from having a heart attack, I will say it has been a success.’’

Would a diet work for you?

This week, Dr. Raj Krishnamurthy discusses the use of diet programs and their pros, cons.