Secret to a happy marriage? Delusion. 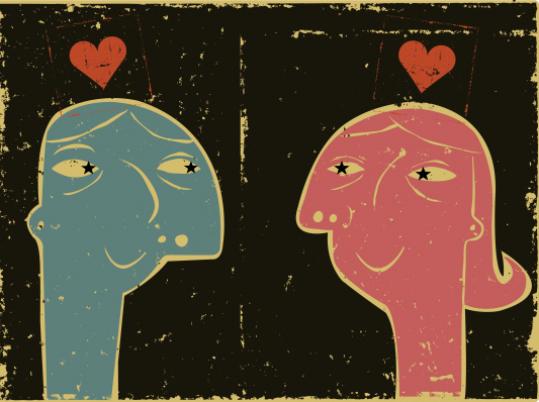 We’ve all seen those mismatched couples — where the husband is 10 times better looking than the wife. Or where she’s an absolute sweetheart, and he’s a total jerk. What does she see in him?, we think. What does he see in her?

If the couple is happily married, it could be that the better half of the couple has an idealistic vision of the lesser half. New research published in Psychological Science oddly enough finds that people who were, well, a bit delusional about their partners when they got married were more satisfied with their marriage three years later than those see-it-like-it-is realists.

University of Buffalo researchers recruited 222 couples heading in to apply for marriage licenses to fill out surveys on themselves, their partner, and their marriage every six months for three years. They then compared the self-ratings of respondents in terms of intelligence, creativity, athletic skills, etc., with how their spouse rated their attributes.

Those who inflated their partner’s assets also reported being more happily married. “People are very good at changing their definitions to match how they want to see themselves or how they want to see others,’’ lead study author Sandra Murray says in a statement. They can decide their spouse is the perfect match for them, even if they clash pretty badly.

Seeing a partner with rose-colored glasses could help protect against that decline in marital satisfaction that sets in almost as soon as the honeymoon bags are unpacked. “Seeing a less-than-ideal partner as a reflection of one’s ideals predicted a certain level of immunity to the corrosive effects of time,’’ write the researchers in the study.

They say there’s a case to be made for encouraging couples to maintain “positive, even unrealistic, perceptions’’ of each other to stay satisfied over the long haul.

And I have to admit, it does make sense. Thinking your partner isn’t good enough for you may entice you to seek out a better partner. Thinking that person is better than what’s out there might encourage you to stay and be more satisfied.

By the same token, inflating an insecure partner’s sense of self — by expressing your own delusional beliefs — will lessen that person’s fear of abandonment.

I’m just wondering if couples heading for a breakup can really transform that contempt into starry-eyed romance. The researchers say yes. “People have the power to shape their romantic fates through their behavior,’’ they write. “Indeed, the behaviors that sustain relationships (e.g., being supportive) and the behaviors that undermine relationships (e.g., being critical) are controllable ones.’’

heresoyouknowthetruth wrote: Many may not see my wife as the sexiest woman on the planet. To me she is an absolute KNOCK OUT head to toe . . . asleep, awake, makeup, no makeup. That does NOT make me delusional, that makes me a realist.

AubreeAnn wrote: Love is about seeing what others lack the interest/patience to discover in a partner. No one can know your relationship as well as you do, and without every fact there is no basis for a diagnosis of “delusion.’’ Suggesting delusion might be the secret to happy marriage is a dangerous notion.

bunzee wrote: There are 15 words that, if really lived by, provide the basis for happy marriage. All the experts, authors, marriage counselors, and any other advice givers would be out of business if these words were a real part of every marriage. Here they are; I love you. Can I help? It’s my fault. You look beautiful. Let’s eat out.

Another day, another study bashing soda and sugary beverages. This time, British researchers have linked daily consumption with increased blood pressure. The observational study of 2,700 people found that each sugar-sweetened beverage consumed per day was associated with a 1.6-point rise in systolic blood pressure (the upper number) and a 1.1-point rise in diastolic pressure (the lower number).

A few weeks ago, soda was blamed for an increased risk of strokes. And sugary beverages have been blamed for everything from gout to diabetes to the ballooning obesity epidemic. After all, soda is the number one source of sugar in the American diet.

While I’ve never been hooked on sugary beverages, I used to be an avid Diet Coke drinker and still have a can occasionally. But I consider it an indulgence rather than an everyday beverage to quench my thirst. I mainly stopped because of my kids. They would see me drinking soda and beg for it too. Now we all drink water or a little calcium-fortified orange juice with breakfast.

drh042003 wrote: Just drink seltzer water. Some of it is flavored and has zero sugar. No brainer.

SJG3 wrote: I quit soda cold turkey. Here are some tips: Buy a canteen, fill it with water, and keep with you all day. DO NOT have “just one.’’ Ever.

The American Academy of Pediatrics issued a statement last week supporting a ban on the use of tanning beds by teens. Research suggests that those who regularly use tanning beds may double or even triple their risk of developing deadly melanoma. Even tanning once in a while can increase skin cancer risk by 75 percent.

Last March, a US Food and Drug Administration advisory committee recommended that people under 18 be barred from using tanning beds or at least have parental consent. The new AAP declaration could help convince the FDA to follow its committee’s recommendation. The agency now classifies tanning beds as a “class I’’ medical device subject to scant regulations, on par with tongue depressors and elastic bandages.

The Indoor Tanning Association opposes any new regulations, saying that people should have the freedom to tan and that getting burned by the sun is far worse.

Meanwhile, nearly one in four white teens have reported at least one visit to a salon. The AAP is urging pediatricians to advise their patients about the dangers of tanning — indoors or out. D.K.

FredQuimby wrote: I guess if you want to die from cancer, you should do it looking like Magda from “There’s Something About Mary.’’

who-cares-1940 wrote: I guess we can equate the Indoor Tanning Association to the tobacco industry.