Retroactive bill for property levies is in the mail, too 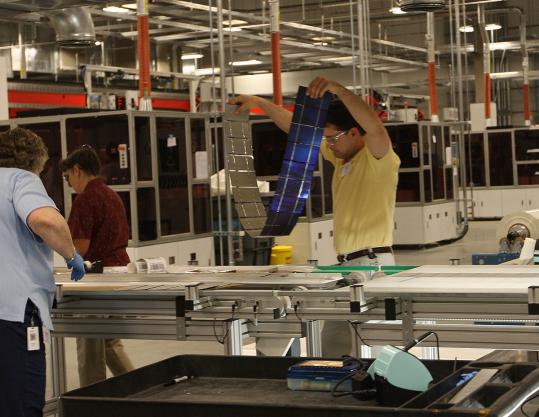 Evergreen Solar’s fortunes have changed. The Patrick administration had made it a symbol of its commitment to the clean energy sector. (Joanne Rathe/Globe Staff File 2008)
By Todd Wallack Globe Staff / May 20, 2011

A Massachusetts economic development board voted yesterday to cut off two multimillion-dollar tax breaks for , two months after the company shuttered the manufacturing plant it built in Central Massachusetts with state aid and eliminated 800 jobs.

The decision is part of an effort by state economic officials to settle accounts with the troubled company, which once seemed so promising that Massachusetts gave it a total of $58 million in incentives to build the factory in Devens, at the site of a former military base.

State officials said they plan to send Evergreen a retroactive property tax bill for $1.5 million. But it remains unclear whether they will be able to recoup any of the $21 million in cash grants that were part of the package.

The company’s fortunes have changed dramatically in the years the Patrick administration made Evergreen a symbol of its commitment to grow the clean-energy sector in Massachusetts.

Beset by falling demand and falling prices for solar products, Evergreen last week warned investors that it is in danger of running out of cash in the next year. The announcement raised questions about how the state would be repaid if Evergreen’s warning came to bear and the company shuts down or files for bankruptcy protection.

Yesterday, the Economic Assistance Coordinating Council, the state board charged with overseeing the tax breaks, unanimously voted to cut short Evergreen’s 20-year property tax break, originally estimated to be worth $15 million, and voided another $7.5 million in state tax credits after the company eliminated the hundreds of jobs it promised to create and retain in Devens.

“The incentive program is a two-way agreement,’’ said Greg Bialecki, secretary of housing and economic development. “If a company does not meet its commitments, then there are consequences.’’

In exchange for the property tax break and tax credits, Evergreen had promised to retain 310 existing jobs and add 350 new ones. The company initially added even more jobs as it ramped up production, but closed the plant in March after concluding it could not compete with cheaper manufacturing in China. Indeed, Evergreen said it would lose money on every solar panel it made in Devens because of plunging prices and demand.

So far, the Massachusetts Development Finance Agency estimated, Evergreen has saved roughly $4.3 million in property taxes under the agreement, but it said the state will probably be able to retroactively recoup only $1.5 million in tax savings for the current fiscal year.

The agency said its contract with the company generally does not allow it to recoup the savings from past years.

Shortly before the meeting yesterday, Evergreen notified the state it would not contest the revocation. Company representatives did not attend the hearing and did not respond to requests for comment.

As for the $21 million in cash grants, Evergreen has previously told investors it owes the state about $3 million of the amount, and may not have to return the money for several years.

Bialecki said the state continues to negotiate with Evergreen about the amount and timing of the repayment.

And if the company does declare bankruptcy, Bialecki said, the state would have ways to recoup money. “It’s fair to say that we have significant differences in the amount the company owes us and the timing of when they have to pay it back,’’ he said.