Some logging halted after outcry over Mass. forestry mistakes 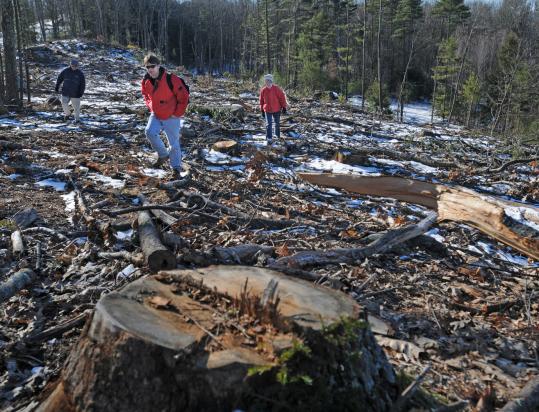 PETERSHAM - As Chris Matera reached a barren hilltop on state land near the Quabbin Reservoir, he swept his arm toward 2 acres of oak stumps and scattered gray tree skeletons. “This is a clear-cut,’’ the Northampton resident said angrily. “Is this really what the public wants on its land?’’

Matera and other conservationists have found and photographed similarly altered landscapes across Central and Western Massachusetts: a 50-acre opening on October Mountain. More than 15 acres in Savoy State Forest. Swaths near Windsor Jambs State Park and Chester-Blandford State Forest with virtually every tree gone. A patchwork of half-acre to 2-acre clear-cuts on other Quabbin lands.

These are largely the handiwork of state foresters who, in the past five years, dramatically changed the way they manage trees on many public lands. After a decade of little logging, the state began using clear-cuts to weed out diseased and aging timber.

While some clear-cutting is allowed, forestry officials now acknowledge that, in the process, they sometimes violated their own rules.

In Chesterfield, for example, they logged a 34-acre conservation area that was off-limits to cutting. In the Quabbin, they did not leave a required buffer between the clear-cut and a scenic road. They also say they did not adequately inform the public about the scope of the cutting.

The result has been a public outcry. Adding to the state’s problems is the recent loss of a prized green-forestry certification because officials have, among other things, fallen behind on their forest management plans.

“We know as a department we have lost the confidence of the public to do good forestry,’’ said Richard Sullivan, commissioner of the Department of Conservation and Recreation. He said in an interview that the rationale to clear-cut the trees was sound - forest health. But, he added, “we admit our mistakes . . . we need the public’s input into the values moving forward.’’

The controversy is occurring as logging and preservation interests increasingly collide in the Northeast’s forests, most of which were once abandoned farmland. The trees are maturing and becoming more economically valuable at a time when increasing numbers of people treasure the woods for walking, hiking, and recreation.

How Massachusetts - the nation’s eighth-most-forested state and the third-most-densely populated - resolves that conflict could serve as an example for other Eastern states.

“New England forests are coming out of a history of undermanagement, and the public perceives nothing happening in state forests as the natural state of things,’’ said Lloyd C. Irland, former director of the Maine Bureau of Public Lands, a consultant, and a researcher at the Yale School of Forestry. When logging of any type increases - but especially when clear-cuts occur - the result, he said, “can almost be like religious wars.’’

Because of public reaction to the cutting, the state has put a hold on new logging contracts and is overhauling how it will manage 308,000 acres of state-owned forests and parks. Less than 20 percent is now off-limits to logging, and the state wants to preserve much more acreage - the exact amount is being fiercely debated - and reduce or even ban clear-cutting.

To the chagrin of conservationists, however, the logging moratorium and proposed rule changes exclude the Quabbin, other state-owned watershed land, and Division of Fish and Game property, where clear-cutting is still allowed in order to create habitat for certain species.

Public hearings on the overhaul in recent weeks drew more than 500 residents, many with divergent views of what forests should be used for.

Foresters and others don’t want the state’s woodlands to be limited by some urban, static view of nature, one that involves putting a fence around it.

“The idea [that] cutting wood is somehow not environmentally friendly does not make sense to me,’’ said Ed Carlson, a Princeton resident. “Let’s fix the mistakes. . . . Do we have to rewrite the whole program on how we manage forests?’’

One band of park and land conservation groups across the state says yes. Matera, a civil engineer, has meticulously documented the state’s mistakes in reports with sensational titles such as “Massachusetts Chainsaw Massacre’’ and pictures of clear-cuts on state lands. He has hired planes to snap pictures of felled trees from the air.

Matera says state-owned public lands represent only 11 percent of all land in the state and should be preserved for their noncommercial value. But right now, he and other critics mostly want to end clear-cuts, which they believe are unsightly, unnecessary, and harmful to the forest ecosystem. In the forests surrounding the Quabbin - which protect Boston’s water supply - clear-cuts are an especially bad idea, they say.

“You have to watch what they do instead of what they say,’’ said Matera as he walked around the Quabbin cut, made last year off Woodward Road in Petersham.

Several trees are all that’s left standing in the approximately 2-acre opening, despite the official cutting plan for a “shelterwood’’ and “selection’’ cut, which usually means leaving a robust number of mature live trees. State officials say they have disciplined the state foresters involved in the cut.

A management plan put in place in 2007 has resulted in more forest openings under 2 acres in the Quabbin watershed. To critics, these are clear-cuts. Jonathan Yeo, director of DCR’s Division of Water Supply Protection, said the cuts create sunny areas that can quickly regenerate a diverse forest, which helps a wide range of plant and animal species thrive and better withstand storms and pests.

“We are trying to keep the openings as small as possible to achieve our objectives,’’ Yeo said.

But opponents, including the former Quabbin forestry chief, say the cuts are unnecessary.

“I don’t call it forestry, I call [the North Quabbin clear-cuts] bad work,’’ said Bruce Spencer, who retired after 41 years as chief forester at the Quabbin. He said other types of cuts that would not be as jarring to the public could accomplish the same goals.

Ian Bowles, state secretary of Energy and Environmental Affairs, said he is examining forestry practices more closely at the Quabbin and on Division of Fish and Game lands and is likely to ban commercial logging on them.

“Going forward, we will designate a substantially expanded set of forest reserves, allowing forestry on public lands only in a much smaller area, with greater oversight,’’ he said.

State officials say they are also trying to win back certification from the Forest Stewardship Council. The state had bragged about winning that designation in 2004, when it became the first in the nation to have almost all of its state lands certified.

But a recent audit found that Massachusetts had not completed required management plans on forest lands, among other issues, and could not apply for recertification unless it did. The document also pointed out that the state lacked an “analysis of the ecological impacts of clear-cutting healthy mature forest stands.’’ State officials are appealing some of the findings.

Eric Chivian, director of the Center for Health and the Global Environment at Harvard Medical School, has a farm in Petersham and discovered the Quabbin cut. He said state officials “are trying to do the right thing,’’ but he is troubled that the cut took place after the state received the audit identifying some poor forestry practices.

“I’m not against logging,’’ he said. “I am against clear-cutting.’’