Contestants hope to drive the future into Boston 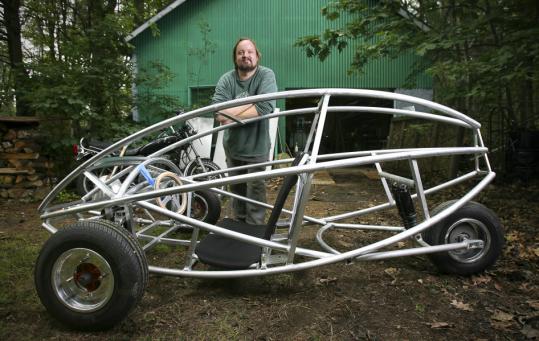 Roo Trimble and six others will compete to drive 100 miles on just 1 gallon. (Aram Boghosian for The Boston Globe)
By Laura A. Bennett Globe Correspondent / August 17, 2009

Roo Trimble has been holed up in his backyard shed for months. Hunched amid whirring saws and jagged metal scraps, he has been welding the aluminum skeleton of a small car, smoothing the joints between the latticed pipes, aligning the wheels, and climbing in and out of the metal hull to make sure he can fit snugly - but not too snugly - inside.

Trimble hopes the three-wheeled, almond-shaped contraption will carry him to victory Thursday in a first-time event called the One Gallon Challenge. As part of the second Boston GreenFest, Trimble and six others will attempt to drive their homemade cars from Greenfield to Boston City Hall Plaza, a distance of 100 miles, using just 1 gallon of gasoline.

“These days,’’ Trimble said, wiping his brow with the back of one hand, “we need to think about taking the snail shells off our cars - not dragging our house with us everywhere we go.’’

Event organizer Jory Squibb, who in 2005 fused two motor scooters to create a fuel-efficient microcar called “Moonbeam,’’ said the message he hopes the One Gallon Challenge sends is that 100-mile-per-gallon cars are not impossible to build. The technology is there, he said; all that’s needed “are gutsy entrepreneurs and gutsy buyers.’’

The idea for the competition sprang from a combination of curiosity and loneliness, Squibb says. He and Moonbeam - a solitary spectacle of teetering wheels and bug-eyed headlights - had been puttering around the quiet roads in his hometown of Camden, Maine, for years. Squibb was eager to know whether any other cars like Moonbeam were roaming the streets. So he pitched his idea to the heads of Boston GreenFest, which runs Wednesday through Saturday, and the One Gallon Challenge was born. The winner will be the car that treks the whole 100 miles - assuming that at least one does - using the least amount of fuel. All cars will be displayed at the festival.

“This is not just a One Gallon Challenge for these cars at the Boston GreenFest,’’ Weber said. “It’s a call to action for our automotive industry. If a bunch of amateurs could build these kinds of cars just tinkering in their backyard, think about what companies could make available to the public.’’

For Trimble, 42, who studied industrial design at Rhode Island School of Design and now does architectural metalwork, the project began with a simple revelation. As gas prices soared last summer, he was sitting in his Beetle and saw a sticker on the door that listed its weight: about 3,000 pounds. “I realized, for every gallon of gas that I put in, 90 percent of it is being used to drive the car, and 10 percent to drive me, and that’s just stupid,’’ he said.

So he began sketching shapes and building models out of metal rods. He combed and found three wheels off an ATV, a suspension system taken from the back of a Harley, and a teal-colored diesel motor. When complete, the Roopod, as it is called, will weigh less than 500 pounds.

Among his competitors will be rickety diesel, electric, and gasoline-powered automobiles, including a teardrop-shaped, single-passenger commuter vehicle and a car that looks like a spacecraft, powered in part by human pedaling.

Some vehicles appear more formidable than others. A team of 15 MIT students will compete with a ’76 that they have spent years converting into an electric car. It has a sleek silver body with leather seats and a trunk packed tightly with hulking batteries.

“We’re hoping to raise awareness about what electric vehicles can do, what the future may be for them, and why they’re practical,’’ said Matt Gildner, 20, a junior at MIT. “But the battery technology is a big challenge since it’s so expensive.’’ Though the original Porsche was donated, it cost $60,000 to convert - $40,000 on batteries alone. The current battery pack takes about eight hours to charge fully.

“I think we’ll have to charge about halfway through the One Gallon Challenge,’’ said Irene Berry, a graduate student in technology and policy, standing in an MIT workshop space cluttered with wrenches, old motors, and cars in various stages of dismemberment. “And I hope it doesn’t rain. It makes me pretty nervous to drive in the rain in a high voltage car with a lot of components exposed.’’

Although the One Gallon Challenge features a colorful spectrum of vehicle innovation, the cars are far from ready for mainstream use.

“It’s dangerous to make the assumption that just because these cars can complete a race like this, they can work in the real world,’’ said Brett Smith, senior industry analyst for the Center for Automotive Research, a nonprofit based in Ann , Mich. “It’s very tough to meet the incredibly difficult safety standards that the government and consumers expect for vehicles. These cars might be cute and fun and fuel efficient, but they are not nearly as safe.’’

Ensuring that microcars like the Roopod meet safety regulations would require a number of modifications, including air bags and bumpers that add weight and make them less fuel efficient, Smith said.

Many of the vehicles that will compete in the challenge have three wheels because they must be officially registered as motorcycles in order to be deemed road legal. Trimble placed an ad for an old motorcycle on craigslist, sawed the vehicle identification number out of its flank, and plans to weld it into his car. The Roopod is legally considered a 1980 Kawasaki motorcycle.

“People drive SUVs because they’re afraid that smaller cars aren’t safe, but look what we’re doing to our environment to fuel their illusion of safety,’’ said Bill Buchholz of Camden, whose “Dirigo,’’ a three-wheeled diesel car paneled in red varnished wood, is competing Thursday. “When people see small cars performing well, they might consider not buying a big steel box on wheels. We might be able to spark a little bit of open-mindedness.’’

On Thursday morning, Roopod, Dirigo, Moonbeam, the MIT Porsche, and their competitors will gather at an old hunting lodge on the banks of the Connecticut River in Greenfield. The cars will begin on backcountry roads, threading through dusty towns and wide pastures. Then they will hit the Massachusetts Turnpike.

“I’m nervous about going on the freeway with all the SUVs out there,’’ Trimble admits. Roopod is engineered to hit a maximum of 65 miles per hour, and some cars go slower than that.

But if he can’t get Roopod legally certified in time for the race, it will not matter. He will be lugged from Greenfield to Boston on a trailer. In fact, a flotilla of rescue vehicles will pursue the cars during the competition, just in case anyone sputters out.

“Either on our own tires or on trailers,’’ Squibb said, “we’ll get there.’’

© Copyright 2009 Globe Newspaper Company.
Graphic One gallon challenge
Your comment is subject to the rules of our Posting Policy
This comment may appear on your public profile. Public Profile FAQ