From Chocolate Frogs to Cauldron Cakes, the sweets of ‘Harry Potter’ cast a spell 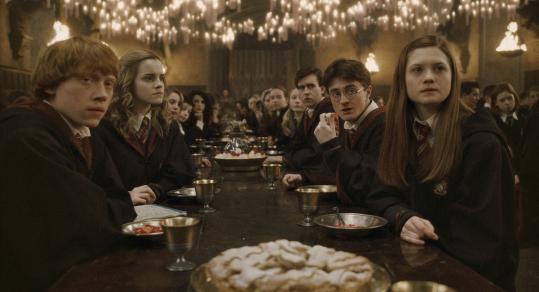 The dining hall at Hogwarts (here in a scene from “Harry Potter and the Half-Blood Prince’’) is the setting for many feasts at the wizarding school. (Warner Brothers Pictures)
By Cecille Avila Globe Correspondent / July 13, 2011

For a boy who gets the first birthday cake he can remember on his 11th birthday, Harry Potter certainly makes up for it later.

Aside from his very first squashed cake from Hagrid, over the next six years, Harry receives four cakes on his 14th birthday, one on his 16th, and a giant cake in the shape of a Snitch for his 17th.

While the cakes and other sweets Harry receives for birthdays and holidays are fleeting, they mark the presence of people who truly care for him. For the first time, there are people who are not only reluctant guardians, but people who happily keep the “boy who lived,’’ well fed and well entertained, endowed with sweets.

Filled with descriptions of food, the “Harry Potter’’ series by J.K. Rowling stimulates the imagination and often the stomach. Once out of 4 Privet Drive and Dudley Dursley’s reach, Harry is free to eat and so he does with gusto.

In the presence of Molly Weasley, either at the Burrow or 12 Grimmauld Place, Harry eagerly eats multiple servings of the food she prepares. The same goes at Hogwarts, where food is plentiful and varied, especially at the celebratory feasts held throughout the year.

It isn’t the day-to-day food that truly stands out - it’s the wizarding world’s take on sweets.

On the Hogwarts Express, Harry is offered corned beef sandwiches by Ron Weasley, but instead the two lay into a stash of sweets Harry has never seen before. He discovers Bertie Bott’s Every Flavor Beans; Droobles Best Blowing Gum, which produces bubbles that fill the room and won’t pop for days, and Chocolate Frogs with collectible cards inside. He also tries Pumpkin Pasties, Cauldron Cakes and Licorice Wands, which are probably more innocuous than strange, but it’s tough to tell.

It isn’t until two years later when Harry explores the wizarding village of Hogsmeade, that he discovers Honeydukes, filled with more curious confections than some stomachs can handle. Some of what he finds - rows of chocolates, coconut ice, nougat chunks - can probably be found in a Muggle sweet shop. Others, not so much.

Looking to smoke at the mouth and breathe fire? Buy some Black Pepper Imps. Craving sherbet and don’t mind levitating? Find a Fizzing Whizbee. Didn’t do the reading but craving something sweet in class? Suck on a Sugar Quill and try to look thoughtful.

Most of the sweets are bizarre but good-natured - there are toad-shaped peppermint creams that hop around in the stomach after they’ve been eaten, Ice Mice that make a person’s teeth “chatter and squeak,’’ and don’t forget about the bonbons, which are explosively different from the Muggle kind.

But there are some sweets that cater to the less-innocent occupants of the wizarding world: Acid Pops can burn through a person’s tongue (as happened to Ron, duped by Fred into eating one at the tender age of 7); Cockroach Clusters (hint: they aren’t peanuts); and blood-flavored lollipops that suggest Honeydukes isn’t just for Hogwarts students out on an excursion.

At the Three Broomsticks, Harry and his friends drink butterbeer for the first time, served either hot or cold. The alcohol content is minimal, unless the drinker is a house-elf or similarly sized.

More edibles with quirky side effects pop up later in the series, as the Weasley twins begin to focus more on their inventions and less on their schooling. Neville Longbottom unwittingly becomes a tester of the Weasley Wizard Wheezes’s Canary Creams, turning into a large canary amid celebrations in the Gryffindor common room.

And if you don’t remember anything else from year three of Defense Against the Dark Arts with Professor Lupin, remember this: chocolate fixes everything. Especially after you’ve faced your greatest fear and turned it into something ridiculous.

Cecille Avila can be reached at avila.cecille@gmail.com.