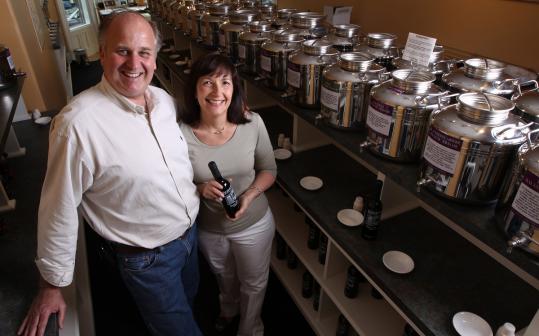 Patrick Vardaro thought he was shifting away from physical labor when he and his wife, Gail, opened Boston Olive Oil Co. on Newbury Street last September.

“You get to a point in construction where you don’t want to be up on a roof banging nails in the wintertime. I’m a little past that point,’’ the 53-year-old semi-retired residential contractor says. Little did he know how much physical work he was in for. “Between the deliveries and the filling of the [drums] and the cleaning, there’s a lot of little ins and outs you don’t think about ahead of time.’’

On a recent Saturday afternoon, their narrow, airy shop is crowded with customers who circle an island of polished silver drums, turning spigots for trial sips of olive oil or balsamic vinegar. The store, which deals mainly in 375-milliliter bottles priced at $18.95, also keeps a selection of infused oils and balsamic vinegars flavored with various fruits, herbs, and spices. Pomegranate vinegar and Tuscan herb oil have proved such a popular pair that Vardaro says he could sell just those.

Since opening, the pair has tag-teamed staffing the business. For Gail, 52, that means sandwiching weekend shifts between her full-time work in customer service for a local utility company. Patrick is easing out of home remodeling; he takes care of the shop on weekdays.

The couple didn’t set out to become entrepreneurs. They spent years chasing down new varieties of olive oil online and in specialty shops - mostly because they enjoyed the product - but found buying solely on label descriptions can be a letdown. During a stop at a North Carolina olive oil tasting bar, Patrick decided that he could combine his passion for collecting olive oil with his long-brewing, but unsettled, plans for a retirement project.

“I had an epiphany about how well this concept would work [in Boston],’’ he says. “I don’t think Gail thought I was serious for a long time.’’

She laughs. “It was like, what are you building in the garage? Cabinets for the store? What store?’’

Daughter Kaitlin, 20, was an enthusiastic supporter from the start. She helps at the store during breaks from her studies at Roanoke College in Virginia. “The boys both thought we were crazy, though,’’ says Patrick, referring to Kaitlin’s two older brothers. “They were like, ‘Dad, why do you want to do that now when you’re getting ready to retire?’ ’’ He says they’ve come around.

The Vardaros, who live in Norwood, say they have similar taste in olive oils. They share a preference for assertive oils from young fruit and are most passionate about the store’s single olive offerings. They rotate between varieties from Northern and Southern hemispheres, depending on what’s been crushed most recently, and the owners enjoy spotlighting differences in the flavor spectrum. The range starts with subtle, grassy oil from Arbequina olives and climbs in robustness, finishing nine varieties later with the Vardaros’ current favorite, a bold product of Frantoio fruits that packs a lingering, peppery wallop.

Letting customers sample is key to this business. Nearly all of the customers tasting their way around the store leave with a bottle or two in hand. Knowing what she’s buying is a comfort for Alex Cervini, who popped in for a housewarming gift for food-loving friends. “It’s like a wine tasting, but more diverse. The flavors are so different, so it makes me feel better spending the money,’’ says the 25-year-old South End resident.

The Vardaros understand the wine comparison. “People think of olive oil like wine, almost, and they get intimidated,’’ Patrick says. “You’ve just gotta start using it and enjoying it. It’s not some big snooty thing.’’

Erin Carlman Weber can be reached at erin.carlman @gmail.com.