Blowing the lid off traditional cookery 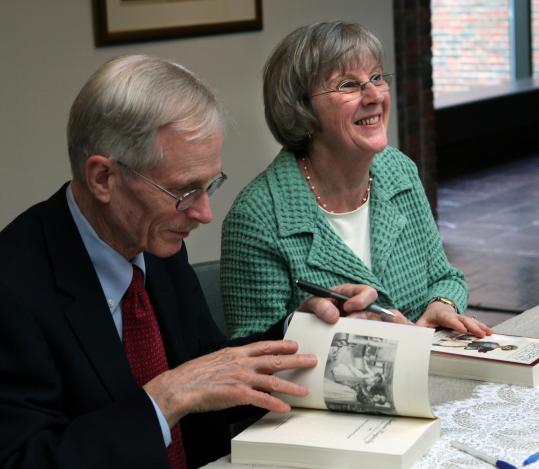 LEXINGTON — Imagine a cuisine focused on fresh, local ingredients and closely tied to the seasons, a table that employs the nose-to-tail approach to dining, a regimen low in sugar and high in fresh herbs and a wide range of seasonings.

That pretty much describes the approach of most modern chefs. But it was also the way cooks in this country prepared meals until the Civil War, according to food historians Keith Stavely and Kathleen Fitzgerald. Their book, “Northern Hospitality: Cooking by the Book in New England,’’ digs into the antecedents of what we think of as traditional New England cookery, and what they uncover may come as a surprise to those who think of the region’s classic dishes as bland and uninspired. They spoke recently at the National Heritage Museum, in conjunction with “Night Road,’’ a photo exhibit of diners throughout the Northeast.

Stavely and Fitzgerald, who live together in Jamestown, R.I., titled their talk “Pressed Heads, Pottages, and Pippin Tarts’’ to shed light on the origins of what we think of as traditional New England diner foods: hot dogs, baked beans, chowder, apple pie. It turns out that the story of those dishes is both more and less complex than one might expect.

Take baked beans, a dish beloved in this region for centuries. Everyone knows this classic: sticky beans baked in a pot with so much molasses and brown sugar they might as well be dessert. It was not ever thus, say Stavely and Fitzgerald.

“Beans and bacon were popular in England,’’ Stavely explains, and they were popular here too, from the Colonial period on. But, he says, in early versions, “there was no molasses, sugar, or other seasonings in sight. Only since the 19th-century Colonial revival were they made sweet and falsely rustic.’’

Ah, the 19th-century Colonial revival — a movement popularized by Victorians nostalgic for simpler times. In a phone conversation, Fitzgerald describes the “craze for hearthside cooking’’ that sprang up among the distinctly genteel Victorians. “They would don the simpler clothing and try to reproduce the simple cooking style of the Colonial period,’’ she said. “But when they cooked the dishes, they made them the way Victorians liked them, with more sugar and fat.’’

Other factors contributed to changing the earlier American cuisine, say the authors. A growing New England tourism industry tended to present a simplified view of the past, including its foods. The “domestic science’’ movement, which emphasized order and efficiency, and whose most famous proponent may have been Boston’s Fannie Farmer, “is responsible for the kind of blandness of what became mainstream American food in the 20th century,’’ says Stavely. And finally, the Victorian hunger for gentility meant that meals became, as Fitzgerald notes, “free of evidence of their preparation, dissociated from the farm, the field, and the slaughterhouse.’’

Stavely and Fitzgerald’s book offers some 400 recipes that predate these developments, and they are convinced that these old dishes are worth another look. At the museum talk, the pair presented slides documenting their adventures in preparing white blood pudding, pressed head (which starts with a halved pig’s head), beans, chowder baked in crust, and pippin tart — precursors, they say, of today’s hot dogs, cold cuts, baked beans, clam chowder, and apple pie.

At the museum, some audience members groan when an image of the pig’s head and trotters appear on screen, but Stavely and Fitzgerald are not easily daunted when it comes to re-creating the dishes of an earlier day.

“Part of our intent is to show people that although the recipes can be a challenge, they are cookable,’’ says Fitzgerald. “We want to change the way people think about historic cooking.’’

Sometimes they adapt and adjust the historical recipes, but the two have gotten reasonably authentic results in their modern kitchen. And the dishes, they say, aren’t mere historic curios.

“We’ve found that the recipes we’ve cooked have been actually quite delicious,’’ says Fitzgerald.

Old-style beans and bacon, for instance, have a definite edge over today’s version: “They’re delicious; they’re not that dark brown color, and they’re much more authentic and essential-tasting than the glop you’re served these days.’’