He wrote the books on modernist cuisine 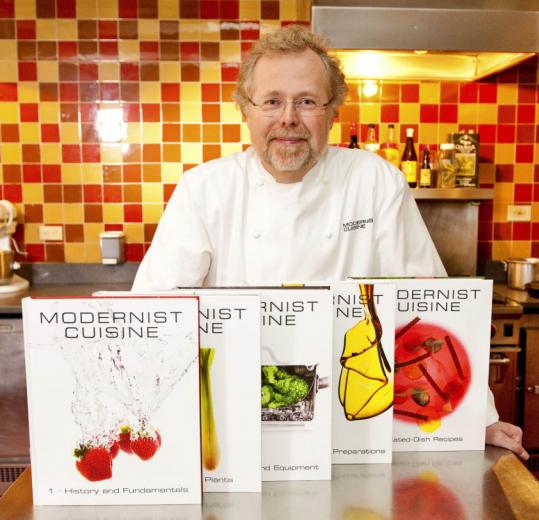 You may have heard the expression “modernist cuisine,’’ the avant-garde form of cooking pioneered by Ferran Adria at El Bulli in Spain and chefs like Grant Achatz, Heston Blumenthal, and Wylie Dufresne in this country, described as “molecular gastronomy.’’ But that term is disliked by the chefs who are its main proponents. Liquid olives, salmon tartare in an ice cream cone, and edible dirt are a few of the movement’s signature dishes.

Now the revolution has arrived between hard covers. “Modernist Cuisine: The Art and Science of Cooking’’ is a six-volume work, 2,438 pages long, 47 pounds, priced at $625. It’s an encyclopedia, a manifesto, and a documentary, and, should you find a way to get your hands on it, you’re in for an experience that will leave you awed, exhausted, and agog with disbelief.

What I saw was not the physical artifact but a digital review copy. Nor have I ever had the means to dine at the rarefied edge of the form. The closest I ever came was a restaurant externship with Dufresne, two years before his interest in experimental cuisine was even ignited.

But as a reviewer who sees several hundred cookbooks a year and has a seven-days-a-week relationship with home cooking, I found myself in a unique position to assess the practicality of such a volume, and what relevance, if any, “Modernist Cuisine,’’ the book, has for the home cook.

On the face of it, the answer is practically none at all, as I discovered after three days of immersion. Even the recipes “requiring no special equipment’’ turned out, on closer inspection, to require quite a bit of special equipment after all. A simple caramelized carrot soup called for carrot juice and carotene butter made with a washing-machine-size centrifuge (and a pressure cooker, which I should have, but don’t). A rapid search of my kitchen to see if I had an autoclave, a chamber vacuum sealer, or a dehydrator came up, rather ironically, as empty as the vacuum I had no way of creating. Also missing were some key ingredients, like transglutaminase (also known as “meat glue’’), liquid nitrogen, and any form of hydrocolloid gelling agent.

Perhaps the most doable recipe I ran across was a Gong Bao chicken, to be marinated in a vacuum sealed bag but otherwise normal. On closer inspection I saw it was adapted from a Fuchsia Dunlop recipe I’d already made and loved, without once thinking, what this needs is a vacuum-sealed marinade. I am willing to believe it could be even better, but not willing to buy a vacuum sealer to find out.

But what can a home cook learn from this book? The answer is: a great deal. Author, former executive, and autodidact Nathan Myhrvold has put together a dictionary of food science as authoritative as Harold McGee, as engaging as Shirley Corriher, as geeky as Alton Brown, and as gorgeously photographed as a Bertolucci film. From the shocking of green vegetables in ice water to the searing of a steak, no basic principle of cooking is left unexplored. Questions of how and why are answered to a degree of thoroughness just beyond your understanding (unless you’re a molecular chemist).

It’s exhilarating to see basic food questions furnished with answers from the very cutting edge of food technology. For the perfect modernist burger, for example, you’d need to vacuum-seal the meat and cook it in a sous-vide machine (the highly controlled technique underlying many of these formulae) to 133 degrees, freeze it for 30 seconds in liquid nitrogen, and then deep-fry it. I won’t go into the five ways you can make the perfect fries, except to mention that one of them involves cavitating in an ultrasonic bath. Did I lose you at “involves’’? No matter. Just look at the pictures. All five versions look good enough to eat with your eyes. Given time, they’ll think of a way to do that too.

If you come to “Modernist Cuisine’’ looking only to be entertained, then you won’t be disappointed. In a world where you can give the flavor of any ingredient the physical form of any other ingredient, food becomes the stuff of dreams: glass sheets of pineapple, spinach paper, tiny pearl droplets of cooked egg, a cloud of soy sauce, carrot foam. Too dumbfounding to even form the question “why?’’ is a monkfish with “constructed skin,’’ a gelatin film painted with real silver powder. It looks exactly like fish skin, but it’s not. Or an edible soap bar with honey bubbles, which will seriously faze your great-aunt Edith.

There is a final question: Should you buy this? Like any art movement, modernist cuisine has little use for “should’’ questions, like “should we expand the market for industrial food chemistry?’’ or “should you use these energy-intensive technologies just for fun in an era of decreasing fuel availability?’’ The sticker price of the set, however, is a plain fact: $625 (“less per pound,’’ Myhrvold maintains, “than Parmigiano-Reggiano’’). So while practical matters may be irrelevant to the enjoyment of this book or its value as an artistic statement, they pose a serious impediment to buying it.

If I had $625 I’d join the wait list for my own copy. But it’s been a rough winter, and our barn collapsed, and in the end, well, the kids have to go to college. Taken on its own terms, an experience like “Modernist Cuisine’’ is most valuable for the license it gives you to dream, which is priceless. But it remains up to you whether that dream is “priceless,’’ meaning “at any cost,’’ or “priceless,’’ meaning “free.’’

T. Susan Chang can be reached at admin@tsusanchang.com.