A meal with a picky eater can ruin anyone’s appetite. Two nutritionists write about helping children be less fearful and more accepting of new foods. 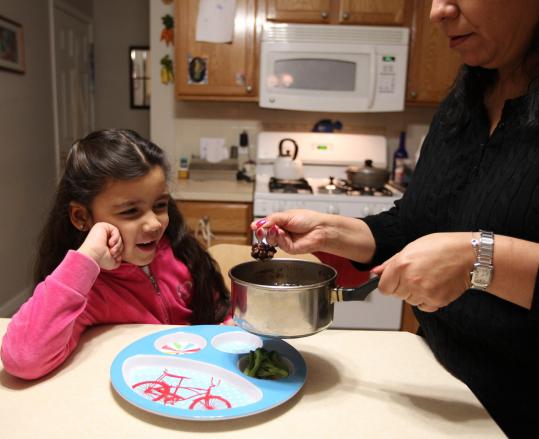 Parents of small children are never happy when the nightly meal turns into a struggle. They may have cooked for a child who will not eat anything but frozen waffles. Or who won’t allow the vegetable to touch the meat or the meat to touch the rice. Or who won’t try anything new — especially if it’s green. Or worst of all, a child who expects a specially prepared dish that is completely different from what everyone else is eating.

It’s difficult to watch a picky eater in action. And it’s just as hard for parents to back off. Perhaps the little ones are not getting enough vitamins and nutrients. Do pizza and frosted cereal and an occasional sip of milk constitute a proper diet?

In many cases, pediatricians tell parents not to worry. “Most kids don’t get vitamin deficiencies, because so much of what they eat is fortified,’’ says Shari Nethersole, a pediatrician in the primary care practice at Children’s Hospital. Ruth Sakakeeny, a pediatrician with Needham Pediatrics, says the first thing she does when parents express concern about their children’s food intake is pull out the growth chart. “I say to those parents, ‘They’re not eating as you like, but they’re growing appropriately and they’re active and healthy. Clearly, what they’re doing is working for them,’ ’’ says Sakakeeny.

“Seeing that reality is very useful for parents,’’ says Nethersole.

When local nutritionists Liz Weiss and Janice Bissex surveyed 600 mothers on obstacles to getting children to eat healthy diets, the most frequently cited hurdle was “picky eaters who whine and complain.’’ That led Weiss and Bissex to write “No Whine With Dinner,’’ a book that features 150 family-tested, child-approved recipes.

Recently the duo, who call themselves “Meal Makeover Moms,’’ and have a website with the same name, led a workshop for about 30 mothers and a handful of fathers. With their matching bobs and no-nonsense approaches, Weiss and Bissex could be mistaken for sisters. They prepared smoothies, quesadillas, and fruit kebabs for the attentive crowd, all the while dispensing tips on how to cook for children. Some of it was a bit surprising: Let kids eat dessert, they say, and don’t make it contingent upon eating vegetables. As Weiss explains, “That tells them vegetables are yucky and dessert is a reward.’’ Other advice: Canned vegetables are fine, especially if the alternative is no vegetables at all. And above all, resist the urge to add cauliflower to mac and cheese, avocado to chocolate pudding, and other sleights of hand.

“Sneaky gets in the nutrients,’’ says Weiss, “but it doesn’t teach them anything.’’

Later, the two elaborate: “Sneaking vegetables into food says they don’t taste good, so we’re going to hide and puree them. It’s the wrong message,’’ says Bissex. They did try a couple of those recipes, but the resulting dishes were far from successful. “Our children wouldn’t even eat them. They were awful,’’ recalls Weiss. That said, they are amenable to adding pumpkin to pancakes or carrots to lasagna, as long as the kids know it’s in there. “We believe in full disclosure,’’ she says.

When children still do not eat, parents get frantic. Nethersole and Sakakeeny both say that it is the rare child who is not growing, and neither sees a need in most cases to supplement with vitamins. Nethersole does at times recommend a multivitamin with iron, B12, and folate for children not eating meat, and vitamin D for those not drinking milk. And Sakakeeny will occasionally suggest a multivitamin. But, she says, that’s mainly for parental peace of mind. “It’s not something that’s usually necessary,’’ she says, “but it’s comforting to the parents.’’

Parents desperate to improve their children’s diets, though, will use any method that works. “I know they say don’t try to fool them,’’ says Rosa Aguirre, of Everett, “but we puree carrots and mushrooms, and cook that into tomato sauce, and my daughter loves it.’’ You can’t blame Aguirre for resorting to occasional subterfuge; her 6-year-old daughter, Sofia Blandino, will eat little besides chicken, beans, and broccoli. Lately, though, Aguirre says she’s had some success expanding Sofia’s repertoire by repeatedly offering her a new food, even when she refuses it the first few times, a technique endorsed by most nutrition experts, including Weiss and Bissex. Aguirre recently introduced cauliflower this way, and by the third try, Sofia took a small bite.

For parents of picky eaters, there’s a temptation to cater to the choosy ones by making two (or more) different meals. The experts have one piece of advice for that: Don’t. “By preparing separate meals for your picky kids, you’re saying that [they] don’t have to learn to try to appreciate new foods,’’ says Weiss. Any mother can make herself crazy trying to prepare several different meals at once.

There is some middle ground, says Nethersole. “You don’t want to be a short-order cook, but it is fair to say there is an alternative. You can say, ‘If you don’t like what we’re having, you can have a peanut butter sandwich or a bagel’ — something healthful that you would approve of.’’

Maureen DiGiovanni, a mother of two from Malden, finds herself falling into the short-order trap at times. Younger daughter Heather, 9, has fairly broad tastes, but older daughter Hannah, 11, is particular, and, says DiGiovanni, “I wind up making two or three different meals by supper time. This goes on every day. They both want different things at the same time.’’ Hannah’s a particularly tough case; DiGiovanni says Hannah eats “mostly carbs — pancakes, pasta, pizza.’’ And that goes for family celebrations, too.

It is certainly not unusual for siblings to have different tastes, creating a whole other set of challenges. “My main difficulty,’’ says Irene Herlihy, of Jamaica Plain, “is that they’re particular in different ways.’’ Her 5-year-old son, Tobias Hasanaj, likes “strange stuff like pickles, goat cheese, olives, hummus,’’ but has declared he will not eat any vegetables. His 7-year-old brother, Nathaniel Hasanaj, will eat a wide variety of meat and vegetables, “but everything has to be bland and ordinary.’’ Herlihy is fairly relaxed about the whole thing — “If they don’t like something, I just give them a smaller portion and make them try a little bit’’ — but she does worry. “My concern is not nutrition, unless their hair starts falling out in clumps. I just want them to have good palates, so when they are adults they don’t just eat bologna and white bread.’’

Experts say that most children eventually outgrow their pickiness and develop broader palates. But it can be a slow and painful process. Cathy Brady-Palma’s daughter Nicole, 13, has come a long way from her toddler days; today, she will eat salad and sushi and broccoli, but her refusal to touch more everyday items, such as her mother’s macaroni and cheese, is an ongoing source of frustration. “People beg me for that mac and cheese recipe,’’ says Brady-Palma, “and she won’t even take a bite.’’

When it comes to handling picky eaters, patience might be the best tool in the parental kit. And sometimes, if the struggles over food become as much about control as preferences, it’s OK to call a child’s bluff.

“It’s not actually true that they won’t eat,’’ says Nethersole, who in her medical practice has seen and heard every story in the book. “If they’re hungry enough, they will.’’

For more information go to www.mealmakeovermoms.com. Weiss and Bissex recommend the American Dietetic Association website www.eatright.org, and the USDA site on Dietary Guidelines for Americans, www.mypyramid.gov