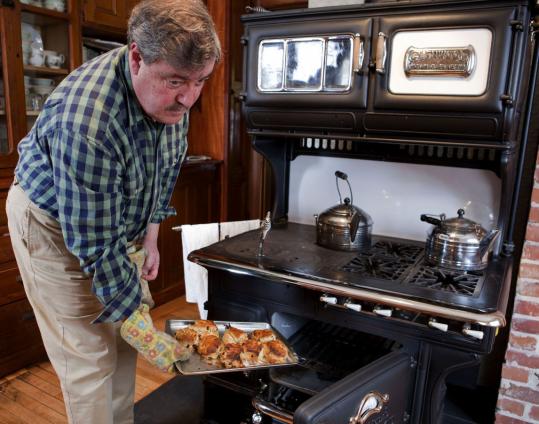 John Buscemi bakes scones in his Gold Medal Glenwood. Two burners are set over coals; four are gas-fired. He says heat is more evenly distributed in the coal oven than in modern ovens. (Kayana Szymczak for The Boston Globe)
By Andrea Pyenson Globe Correspondent / March 16, 2011

LYNN — When John Buscemi talks about his dual-fuel range, he doesn’t mean one of the modern, high-end, gas cooktop-electric convection models. Buscemi’s cooker, a cast-iron Gold Medal Glenwood, is powered by gas and coal, and it was the top of the line about 100 years ago.

When he renovated the kitchen in the Victorian house he bought in 2009, Buscemi, who provides historically accurate fabrics, wallpapers, carpets, and trims to museums and historic houses, wanted an old stove. For 40 years, he has cooked on an antique, coal-fired Glenwood at his house in Vermont. He turned to David Erickson, who meticulously restores antique stoves in his Littleton workshop to find one for this Lynn kitchen.

The Glenwood is named for the gold medal it won at a World’s Fair in the early 1900s. The ovens were made by the Weir Stove Co. in Taunton. “The thing I find satisfying is it’s American,’’ Buscemi says. Two burners are set over coals; four others are gas-fired. There is a full-size coal-fired lower oven, a full-size gas upper oven, and a gas-fired broiler. “It’s almost like having a commercial-size range in a relatively small space,’’ he says. “Some of the first Pyrex on the market was used for the door of the gas oven.’’

“The nice thing about these stoves is you can do a million things that you can’t do on a modern stove,’’ says Buscemi. By removing the two coal burner lids, you can set food directly over the coals and grill indoors. Because the oven is connected to the chimney, all the smoke goes right up it. “You will do steaks better than you can do outside,’’ he says.

Ovens heat from the top down and, according to Buscemi, in the coal oven especially, the heat is more evenly distributed than in modern ovens. “Once you get the hang of it, you can do great souffles, and the most delicate of custards,’’ he says. “Things don’t dry out in these ovens. They’re sealed, [so they] hold in the moisture.’’

Getting the hang of it takes a bit of work. There’s building and maintaining the fire (he started the one that was burning in February just after Christmas, and adds coal regularly), emptying the coal bin daily, lighting each gas burner every time you use it, and lighting pilots for both the gas oven and broiler. The heat in the ovens is controlled with drafts, not a simple knob with numbers.

“It’s not low maintenance,’’ says Buscemi. “Coal isn’t as quickly responsive as gas or electric ranges. You have to plan ahead. It’s a pain in the neck to take the coals out. But when I see what it saves in my heating bill, I’ll take my ashes out three times a day.’’

When the weather warms up, it’s time to switch to gas.