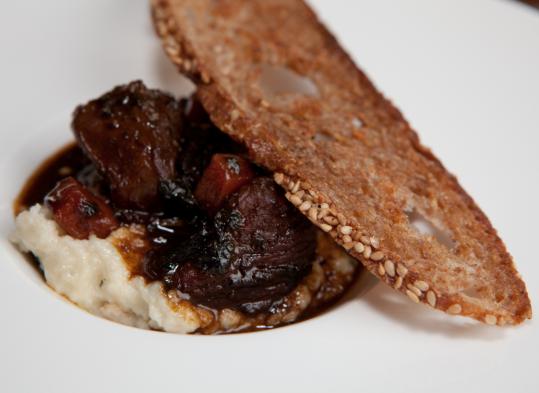 STOCKBRIDGE — When Brian Alberg walks through the dining room of the Red Lion Inn, the grandmothers (diners on this cold December day are mostly women) gape. Yes, ladies, this is your chef: bald, bearded, beefy, and tattooed on both arms from shoulder to wrist. He’s the one who made your turkey dinner and he’s also prepared the salad with his own lamb sausages and creamy local cheese that your hip, urban daughter might order next time you’re here. Oh, and underneath Alberg’s tough-looking biker exterior is also a proud mentor to younger cooks.

Come to the Berkshires and the 237-year-old Red Lion Inn and you expect it to be a throwback to another era, and to dine on the food New Englanders have been eating for decades: chowders, rib roast, pot pies. In fact, all that is here. But Alberg, 43, a graduate of the Culinary Institute of America, has turned this predictable menu on its head. The chef raises his own pigs, smokes his own bacon, tosses salad greens raised for him in neighboring greenhouses, and makes homemade chips for sandwiches. His own cooking, he says, “is backed by a couple hundred years of tradition. It’s just brought up to the 21st century.’’

For a holiday menu, he has simmered local lamb into a ragout, which he serves over soft polenta; sliced roast pork loin and surrounded it with a pan sauce and root vegetable hash; and turned out individual cups of panna cotta topped with a julienne salad of Granny Smith apple, fennel, and celery root, and drizzled them with a warm, buttery rum sauce. There’s nothing show-off here, and though the tastes and ingredients are pared down, the food is bright, very flavorful, and delicious. “I try to keep recipes as simple as possible,’’ says Alberg.

He had been working for a while on panna cotta, a cold, creamy Italian custard that he makes with apple cider, buttermilk, and a split vanilla bean, often molding it in Dixie cups. “I finally got it,’’ he says. “Last night we made 160.’’ Those were served at a fund-raising dinner the inn hosted for Railroad Street Youth Project culinary arts program. Alberg mentors and teaches teens and he welcomed them into his kitchen to cook. “We raised $15,000 after food costs,’’ he says.

The chef’s ragout is made with lamb from Lila Berle, a longtime Berkshires farmer. After an hour, the sauce is dark and smoky, the meat spoon-tender. He ladles it over polenta (the yellow cornmeal comes from New York’s Dutchess County) stirred with a little blue cheese.

In other dishes he might use Crowdie cheese, from a farm in New York, where Berle’s daughter, Beatrice, makes this creamy cow’s milk mixture you might mistake for rich ricotta. Alberg loves that he has the mom’s meat and her daughter’s cheese on the same menu. Tougher pieces of Lila Berle’s lamb are ground for meatballs and simmered in a smoky tomato sauce. Somewhere in the Red Lion, in a large freezer, are 100 quarts of Alberg’s own smoked tomato puree.

Pork loin is cut from his hogs. “I raise 40 pigs with my brother-in-law and father-in-law and sell them to restaurants,’’ says Alberg. Buyers include this inn and New York’s celebrated Blue Hill restaurants. Like many chefs, Alberg roasts meat half an hour in advance, taking pork from the oven when a thermometer reads 120 degrees. He keeps it in a warm place, where the temperature rises to 125 or 130 for pink meat. The pork is full of real pig flavor, even more so on its bed of bacon-laced hash.

In the kitchen, Alberg is surrounded by a mellow staff and even when he wants someone to mop up a puddle on the floor, he is unusually respectful. It doesn’t appear to be an act.

The first snowfall of the season, the night before, has left the region looking storybook pretty. Behind the staid columns of the inn, which former resident Norman Rockwell painted in “Main Street, Stockbridge,’’ is a very traditional sitting room and a handsome tree, handmade ornaments, but no lights. It sits on worn Oriental rugs, surrounded by wood-framed sofas covered with tapestry fabric. Tea pots and English Staffordshire porcelain line the tops of door frames and are tucked into tallboy cabinets. Nearby a staff member unloads wood for the fireplace and stokes the fire. Beside the blaze, a harpist plays Christmas carols.

Alberg came to work at the inn seven years ago. Summers, he rides his motorcycle over the hills, but “only in fair weather,’’ he says. Winters he skis and hunts deer, pheasant, and ducks. He married into a farming family. His wife’s parents own Ronnybrook Farm Dairy in the Hudson River Valley.

The chef serves one of his favorite dishes at breakfast. “Broken yolk sandwich’’ has an egg with a golden center; it comes with his bacon and cheddar from Shelburne Farms in Vermont. Alberg makes every effort to write a menu with something for everyone. But diners can be demanding. “I just did 10 or 14 items for a kids’ menu,’’ he says. “Some dude called and wanted chicken fingers. I said, ‘Dude, no!’ I have a 2-year-old and I want her to eat well.’’

He and his wife, Carey, are the parents of Grace, who helps them find eggs from 11 Bantam chickens they raise on their land in Valatie, N.Y., between two apple orchards. “Nine are laying chickens. We get four twice a day. I devil them or use them for specials at the inn.’’ Alberg grew up in neighboring Columbia County, N.Y., and has two children from a previous marriage. Brendan, 19, works in the kitchen with him; Megan, 18, is a senior in high school.

He and his family celebrate Christmas on Dec. 26, when he’s at the stove in his own home. He decides the menu a few days before. “Maybe a roast strip loin, roast loin of pork, poached salmon, kale, hominy, spaetzle, risotto. I’m not a huge dessert fan, but I made the mistake of making lemon curd tarts for the family and now I have to make them all the time.’’

On Christmas, Alberg is in the Red Lion kitchen, preparing a menu for more than 500 diners. “A lot of people have been coming here for 15 years. As their family grows, so does the reservation, so we have grandmothers, and young moms with their kids.’’

Cooks, some dressed in Santa hats, hang lights over the line. “We’re having a good time,’’ says the chef. “There’s always a party going on in the kitchen.’’

Among the tattoos on his “sleeves,’’ the tiny one near his wrist of a red lion, which he got a year and a half ago, has a special significance. “Even if I’m not here forever,’’ he says, “it’s a huge part of my life, so it makes sense.’’