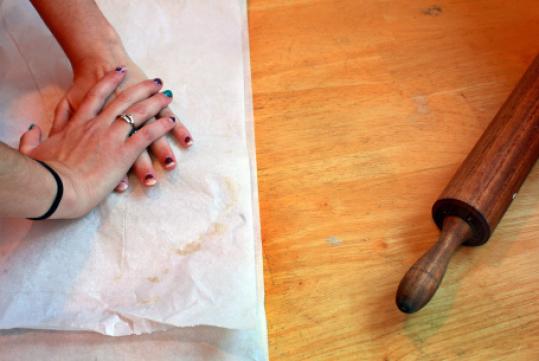 Jenny Olins presses her dough between sheets of parchment paper before rolling it (Michele McDonald for the Boston Globe)
By Jane Dornbusch Globe Correspondent / November 24, 2010

NEWTON — Buy pie, feed people. That’s the idea behind the Pie Project, which 15-year-old Jenny Olins began a year ago. The equation isn’t quite as simple as it appears. Of course you can feed people with pie. But the idea behind Olins’s homemade pies, which she sells for $15 each, is to raise money for the Greater Boston Food Bank. So the feeding component goes well beyond the simple consumption of pie.

With the nonchalance of teens everywhere, Olins shrugs off her efforts. The avid baker got interested in pies a couple of years ago and decided to try her hand at selling them for a cause. “I started with my friends,’’ she said recently, standing in her family’s sunny yellow kitchen and preparing her signature caramel apple pie. “I had to pressure them quite a lot, because most 15-year-olds don’t want to spend their money on pie.’’

Since then, the project continues at a modest but steady pace. Much as she loves baking, the Newton South High School sophomore has to balance those efforts with homework, sports, and other activities. She limits pie production to one or two a week, almost always on Sundays, a day when she can “make pie, do homework, and sit around,’’ she says. The one time she took on three in a single day, she had to call in reinforcements, in the form of her mom, Debby. Jenny has a Facebook page (it’s called the Pie Project), but most of the marketing is done by word of mouth.

The apple pie begins with an oil crust, using a recipe Olins found in the Globe Food section last year (the crust was developed in the 1920s by Wesson Oil). For the filling and method, she adapted “Grandma Ople’s apple pie’’ on allrecipes.com, which is made with a lattice crust, and a caramel sauce poured over the top before baking. Readers who made the pie give it an overwhelming thumbs up. Olins adds more spices to the filling and rolls out a full top crust, rather than a lattice.

As she begins to mix the dough, mother and daughter talk about Jenny’s other baking efforts. “My favorite is the chipotle brownies,’’ says Debby. Jenny describes how, for a sixth-grade assignment, she brought in the spicy chocolate squares spiked with chipotle pepper and cayenne. “Most of my friends hated them and spat them out,’’ she recalls, despite the fact that she’d warned them about the special ingredients. But the brownies are still in her repertoire, appreciated by more discerning eaters.

Even experienced bakers sometimes struggle with pie crust, but Olins is undaunted and apparently always has been. “The first time I tried to make it, it came out well, without too much trouble.’’ She’s aware that “everyone says it’s hard,’’ but she appears to be a natural, tossing together the ingredients from a recipe she knows by heart and adjusting the quantities to achieve the consistency she wants. “I usually add more oil,’’ she says, stirring it in by the capful.

Olins makes several types of pie — banana cream, peanut butter, peach, blueberry — but apple is her bestseller. Unlike some bakers, she’s not particularly fussy about what kind of apples go into the pie. Today it’s Cortlands, a variety prized because its flesh is slow to brown after cutting, but generally, Olins uses Golden Delicious, McIntosh, or whatever is readily available. When she’s done peeling and slicing them, she tosses them with generous amounts of cinnamon, allspice, and freshly grated nutmeg.

The young baker rolls out the dough between sheets of parchment, avoiding sticking issues. After lining the pie pan with dough, she brushes the inside with egg wash before adding the apples. “I think that keeps it from getting soggy,’’ she explains. Baking is all in the details, and Olins’s attention to them demonstrates a mastery beyond her years.

What makes the pie different from typical versions is the caramel. Olins prepares her own sauce, simmering butter and sugar to just the right consistency. She pours some of it into the pie and then more on top of the crust. The pie that emerges from the oven is fragrant and irresistible. The caramel almost melts into the crust during baking and gives it a light, sugary crunch and appealing golden-brown sheen.

The modest Olins doesn’t like to brag, but if you ask how response to her pies has been, she will admit, “A lot of people say it’s the best pie they’ve ever eaten.’’

Dinner Sides Desserts
Complete Thanksgiving guide
Your comment is subject to the rules of our Posting Policy
This comment may appear on your public profile. Public Profile FAQ