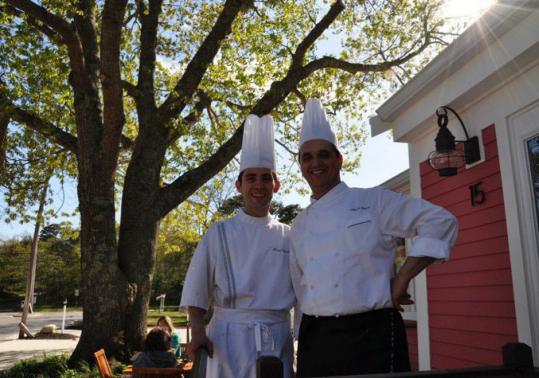 WELLFLEET — Along a stretch of Route 6 dotted with saltbox cottages and eateries serving lobster rolls and broiled scallops, sits a slightly out-of-place French bakery and restaurant.

Most mornings, there’s a line outside by 6:15, though the boulangerie isn’t open until 7. For most of the day, customers snake out the door onto a wood ramp and into the walkway. “The last time I had a chocolate croissant that rivaled this one was in Paris,’’ says Truro resident Charlotte Jerace, who waited for 30 minutes.

Rispoli is the chef in the team, Villatte the pastry chef. “We’re bringing back for people their memory of what they ate when they were in France. When they come here, they’re amazed,’’ says Villatte.

He grew up in the Loire Valley, Rispoli in a village near Lyon. As is the tradition in France, both started their careers young — Rispoli at 14 and Villatte at 16 — apprenticing at restaurants in Lyon, where they met. Rispoli went on to work for the legendary chef Paul Bocuse. His career took him to New York, to Daniel Boulud and the celebrated restaurant Daniel. After several years, he returned to France. Boulud later brought Rispoli to Las Vegas to become executive chef at Daniel Boulud Brasserie at the Wynn Resort.

Meanwhile, Villatte was working at Parisian bakeries, where internationally known French baker Erick Kayser recognized Villatte’s skills and sent him around the world to open boulangeries.

Rispoli and Villatte kept in touch over the years. At one point, Villatte went to work with Rispoli in Las Vegas. “Boris’s bread is magic,’’ says Rispoli. “His bread is alive in your mouth.’’

The pair always had the idea to build a business together. The fact that the location is Wellfleet adds to their charming story. Rispoli fell in love with and married a woman he met in Las Vegas. Valeria Rispoli’s family has a home in Wellfleet. After a number of visits, Rispoli and Villatte decided that the area would be a good place for their venture.

They bought the former Clam Shack and remodeled the building, painting the exterior a salmon color, outfitting the bakery with a state-of-the-art oven and top equipment. They built an open kitchen for the adjacent bistro, an eclectic bar, and a dining room with outdoor seating.

One morning, more than a dozen people are sitting on the patio sipping coffee and relishing croissants. Some are sharing tables with strangers, others are in line asking what they should try. Rispoli and Villatte greet regulars. “Bonjour, madame!’’ “Bonjour, monsieur!’’

Ann Trieger Kurland can be reached at atrieger@comcast.net.