Prep work that precedes their restaurant 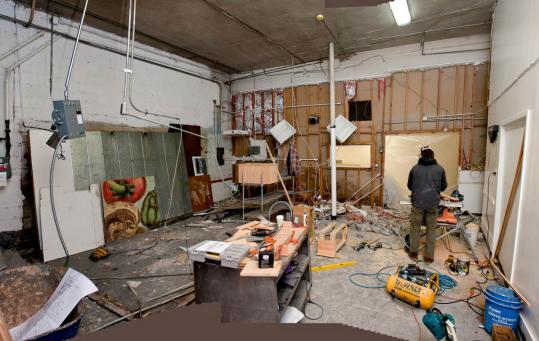 We’ve hardly thought about food for the last two months. Partly because we spent a lot of time thinking about it before we decided to commit ourselves to this project, and partly because the menu is actually one of the least permanent things in the restaurant. All the rest of it, from what the front door looks like to whether you can hear your dining companions, is (or should be) intentional, interdependent, and much, much harder and costlier to change than whether the menu leans French or Japanese. Over the last two months, we’ve been finding out just how many connections and consequences arise from every decision we make as we try to start the restaurant.

Like all new restaurants, Journeyman is behind schedule. We are delayed by a month, and instead of cleaning, stocking our walk-in fridge, and training staff we spend most of our days on the construction site that Journeyman still is. We are now due to open in early July.

Probably the single most influential decision was made in November, when we settled on a location. To a would-be restaurateur, most real estate falls into two categories: spaces that are already restaurants, and spaces that aren’t. Our site was neither. As a pasta sauce factory with a commercial kitchen, it came with some of the trappings of a restaurant: an exhaust hood, a venerable but unbreakable six-burner range, high-gauge steel worktops of equally solid and ancient vintage, a Blodgett convection oven, and a walk-in fridge bigger than our bedroom. These, combined, were worth perhaps $12,000, maybe $15,000 if you factor in the cost of installing the hood. What it didn’t have was air conditioning — or bathrooms.

Signing the lease meant at least $80,000 of renovations just to put the bare bones of a dining room in place. But the alternative, we reasoned, was paying $80,000 to take over an existing space with an identity that we would have to erase. Instead, we committed ourselves to building something new in a truly distinctive setting, in a location which may not be conventionally perfect for a restaurant, but suits us to a T.

A lot of renovations, for reasons of practicality or cost, were absolute requirements. The kitchen layout was dictated by the fact that we could not afford to move the exhaust hood or get rid of the walk-in. We had to have HVAC ($14,000). We had to have at least two bathrooms ($6,000 each), in addition to all the necessary plumbing for the kitchen. Commercial plumbing around Boston is massively expensive because you’re still required to use iron and copper, instead of PVC. In fact, a good chunk of our planning revolved around minimizing the plumbing bill — which is still coming to over $30,000, for what is really a bare minimum of work required. Ditto the electrical bill — about the same figure for the same basic scope.

All this work, however, is essentially invisible. No guest ever notices a restaurant’s plumbing. The sad truth is that what’s visible to the guest is what’s left of the budget. So the last few weeks have been a continual process of editing, doing away with things that matter less in order to buy things that matter more.

Tablecloths and upholstery and flowers on the table don’t matter, but you have to be comfortable at dinner, so we decided to re-create our favorite dining chairs.

Tables are being built for us, because we couldn’t buy a table that works well enough (they wobble, and don’t fit together well). And while we could care less about a sound system, we absolutely cannot stand sitting down to dinner and having to yell to be heard. So we’re installing sound absorption panels of our contractors’ design (“They work great,’’ we were assured. “We use them to keep the noise down when our band practices’’).

Certain expenses just cannot be brought down, because you get exactly what you pay for. We’ve spent umpteen hours trying to find silverware that feels good in the hand and china that complements the food. The expense (probably $6,000 for all the cutlery and china) makes us wince, but there is absolutely nothing mediating the guest’s experience of the plate — it’s just there, and no amount of ingenuity is going to alter whether the plate is elegant on the table.

Fortunately, some equally important parts of the experience don’t cost us anything. The dining room will be spacious. We could probably pack in another 12 seats, but a restaurant where you don’t feel crowded by either tables or noise is a rare and pleasant thing in itself. We decided, against all advice, not to put in a bar, because it would dominate the dining room and create a level of noise and bustle that just didn’t fit.

Elements of the old building are being reused as decoration. The materials are free, they lend the restaurant character, and they tie it to its context in Union Square, and the original, fateful decision that this odd space, in this place, was the right room in which to serve the kind of food we want to feed people.

This is the second of three articles on what it’s like to open a restaurant on a modest budget. The authors are the owners of Journeyman, which will be located at 9 Sanborn Court, Union Square, Somerville. The two have a blog at www.journeymanrestaurant.com, and can be found on Twitter (eatatjourneyman) and Facebook. To read Part 1, go to www.boston.com/food.