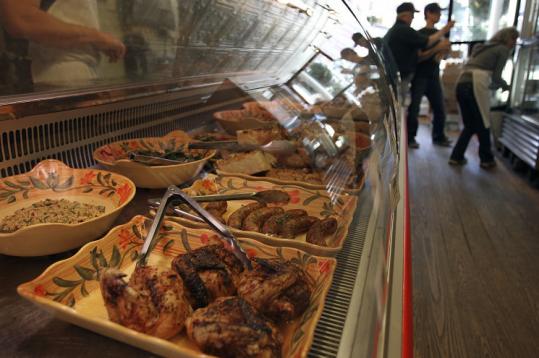 With no cooking or retail food experience, Michael Otto may not be the likeliest person to take over Lionette’s Market, a locavore shop in the South End. But he is perhaps the most enthusiastic and optimistic. Lionette’s could be a place where even purists might feel intimidated. Otto, who renamed the shop Don Otto’s Market, is hoping to turn that around with a welcoming vibe and an encouraging spirit.

“I’m hard-core into natural and local,’’ says Otto, who doesn’t seem to stop smiling. But he’s quick to point out that he’s not quite as committed as former owner Jamey Lionette. About 15 percent of the products aren’t local. Grapefruit have been flown in, as have Humboldt Fog goat cheese from California and Parmigiano-Reggiano from Italy. The shop has other cheeses and fresh produce, along with deli meats, grass-fed beef, and New England products such as vinegars, chutneys, and sauces. The small shop is a few steps down from sidewalk level, but the sunny front window showcases the variety available in the limited space. Otto maximizes shelving and refrigeration cases by filling them completely, but the store doesn’t feel crowded.

The entrepreneur doesn’t pretend to be a purist but is hoping to change attitudes and interest in local food one customer at a time. He wants to engage customers by encouraging them to eat more locally produced items rather than criticize them if they don’t. “We want to educate while still keeping people happy.’’

The shop has started selling coffee and simple breakfasts, a new addition. Pastries and muffins from Canto 6 in Jamaica Plain and fair-trade coffee are part of the morning offerings. Otto is also looking to apply for permitting that will allow him to have several sidewalk tables.

Before buying the market, Otto was working at NXTZ, a snowboarding company he founded and recently sold. Looking for his next venture, he started exploring the possibility of opening a market. He read online that Lionette’s was for sale. Otto named the store for his father, who is an investor.

Otto started shadowing Lionette and took over the market officially early this year. He’s been making small aesthetic changes to the tiny shop and many menu changes, such as additional ready-made sandwiches at lunchtime and a few more prepared foods. One of his favorites is a mozzarella, basil, and tomato salad. David Lundberg, who had been preparing food at the shop, stayed on with the new ownership. He relies on the meat, produce, and sauces from the shelves to create his dishes.

Prepared foods include duck leg confit and a popular veggie lasagna. Otto and Lundberg are continuing to smoke bacon in house. All of the meats sold at the shop are local; prices are high but Otto says customers are coming in regularly with weekly meat orders that top $400.

Eggs, from free-range chickens, are $8.50 a dozen. When asked whether people will balk at the cost, Otto shrugs and explains these chickens’ laying routine. “Their lay cycles rely on the sun, not on artificial lamps that distort production,’’ he says.

Otto’s mission is to help shift people’s thinking about what food should cost, especially non-manufactured, non-processed foods. Although pricey eggs may not be for everyone, salsa, made in nearby Jamaica Plain, is a bit more accessible for the everyday shopper. The same goes for a jar of cider jelly from Springfield, Vt., that Lundberg has incorporated into pork dishes.

To offer nearby residents a chance to cook and shop more locally, Otto is launching Mom Days on Mondays. His own mom will give cooking demonstrations, and share recipes and tips. “It’s a way to challenge the moms of the world to do it the natural way,’’ he says.

At 30, Otto is young and eager to please. He is exuberant about the changes in the small store and practically bounces from washing his hands to pointing out a new cheese or a new shelving system. He and Lundberg greet several people by name.