Touring the world, one dish at a time 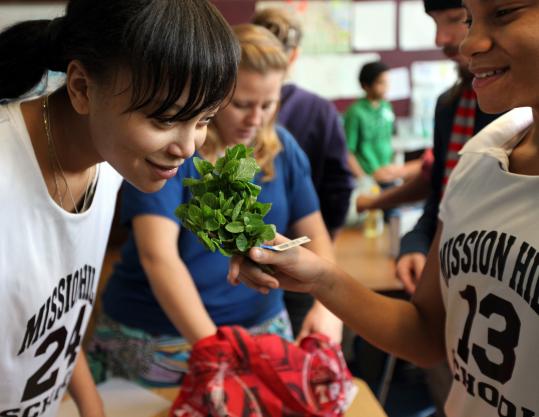 Mid-day in Room 208 at the Mission Hill School in Roxbury, a group of middle-school students, fidgeting only slightly in their seats, listen as Paula Levitt explains the activity. Emilia Onthink and MaryJane Szatkowski, both 13, will deliver their presentation on Lebanon. When they’re finished, the class will divide into groups to make falafel, tabbouleh, and tahini, foods eaten in that country.

The students are participating in Cultural Kitchen, now in its fourth year, a program sponsored by Hostelling International USA, which “introduces teens to different cultures and the idea of hostels and the possibility of travel,’’ says Deborah Ruhe, executive director of HI-USA’s Eastern New England Council. Offered in the Boston, Somerville, and Brookline schools, Cultural Kitchen is based on a similar program in Chicago.

Usually an after-school activity, Cultural Kitchen is presented in 10-week sessions. Students choose which country to study - either one they or their families come from, or another region that interests them - and then make a presentation; they also choose a dish or two for the class to make.

“It’s a fascinating way for kids to get pride in their own culture,’’ says Ruhe.

“I want to be a chef,’’ he says. He’s already learning to make spaghetti and lasagna from his mother and grandmother.

Fourteen-year-old Frederick Rodriguez will deliver a presentation on his native Dominican Republic and share a recipe for rice and chicken, one of his favorite dishes. He says he cooks “all the time.’’ He inspired his friend and classmate, 14-year-old Branden Kellam, to research the Dominican Republic “because of the food.’’ As part of his presentation, Branden wants to make pastelitos (savory fried pastries), which Frederick has made for him.

Onthink and Szatkowski studied Lebanon. Onthink explains, “We wanted to do somewhere in the Middle East. MaryJane’s uncle is from Lebanon, and we like the food.’’ On the day of their presentation, Sarah Traweek, a Cultural Kitchen volunteer, brings in a food processor and blender, along with bulgur, which she cooked at home, and a shopping bag with ingredients for the Lebanese specialties. sponsors the program and supplied these groceries.

For the tabbouleh chefs, Levitt, who is the Cultural Kitchen coordinator, demonstrates rudimentary knife skills on a tomato, focusing on how to hold fingers so they won’t be nicked accidentally. Two young helpers painstakingly remove parsley and mint leaves from their stems before chopping piles of both to add to the bulgur.

Things are moving more quickly at the tahini table, where Vincent Laliberte, a third-year student at Northeastern, also a volunteer, leads a group of boys as they squeeze lemons, chop garlic, measure yogurt and tahini, and moosh it all up in a blender. They finish ahead of their classmates, so they slice pita pockets in half and fill them with lettuce, to await falafel and tabbouleh.

At the falafel station, which takes up nearly a quarter of the room, Traweek oversees the activity as seven workers wash cilantro and parsley, then chop them in the blender and food processor, peel garlic cloves, and chop onions. Once the prep is complete, they add chickpeas and spices, and mix everything in the food processor.

Finally, seven pairs of hands shape batter into green disks, which they pass to the waiting fryers. Levitt and a rotating corps of students stand duty at the fry station, and as the falafel are cooked, they drain them on paper towels before somebody carries them to pita pockets.

Amazingly, lunch is prepared, eaten, and the room is cleaned up, all in an hour - just before the period ends.

In addition to research and presentations, students make field trips, including some to ethnic restaurants. At the end of the program, classes from different schools get together to share a meal. Whenever possible, they prepare and eat it at the Boston Hostel on Hemenway Street and invite hostel guests.

This exposure lets them know that travel “can be accessible. It doesn’t have to be expensive. You can experience culture this way,’’ says Ruhe.

“We want to go wherever people want us,’’ says Levitt.

As word spreads about this chance to experience the world through food, that may be a lot more places.

For more information go to www.culturalkitchenboston.org