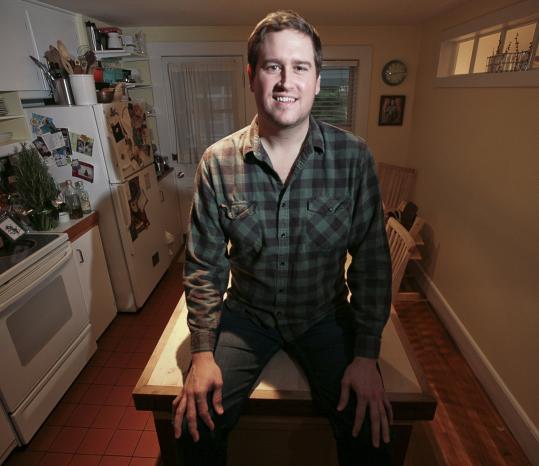 “My whole thing is just simple, handcrafted food using high-quality ingredients,’’ says Charles Kelsey in the kitchen of his home in Cambridge. (Aram Boghosian for The Boston Globe)
December 2, 2009

Charles Kelsey, 33, a former editor for Cook’s Illustrated and writer for Gourmet magazine, had a simple dream. The Culinary Institute of America graduate wanted to operate a food truck. As a business, it would be less expensive than starting a restaurant, and trendier: From New York’s Rickshaw dumpling truck to LA’s Kogi taco truck, these ventures are taking off. It wasn’t quite as simple as he thought, however. By early January, Kelsey hopes to be serving breakfast and lunch at Cutty’s - a decidedly stationary cafe in Brookline. He spoke with us about his brick-and-mortar business, his passion for sandwiches, and why trying to open a food truck in Cambridge can be hell on wheels.

Q. Tell us a little about Cutty’s.

A. I don’t have a good elevator speech. My whole thing is just simple, handcrafted food using high-quality ingredients. I have the capability to start a fine-dining restaurant, blah, blah blah, but that’s just not me. My biggest thing is my focus on sandwiches. They’ll be in the $6-$8 range. I want to offer food to everybody at a reasonable price. I don’t feel entitled to charge $12 for a sandwich because I made it and I’m so special. I just want people to eat better.

A. You can argue that Boston has great sandwiches, and yeah . . . but I’m used to Philly. It’s a sandwich town. People seem excited about sandwiches there. My goal, my overarching dream, is to put Boston on the map for sandwiches.

Q. But you won’t be selling them from a truck. What happened?

A. I had so much support from nearby businesses, but the bureaucracy is tough. I felt as if I was trying to open a gun store in Cambridge. That’s how I felt I was treated. It was hilarious. I do respect their decision. Cambridge has a huge problem with filling retail space, and they feel an obligation to fill that first before putting stuff on the street.

Q. Working at Cook’s Illustrated, where recipes are tested endlessly, seems like excellent preparation for opening your own place.

A. The more I think about it, I’ve just been doing intense recipe development for the last five years or so. What you learn is that you can really make amazing food if you just focus on the one thing and keep trying over and over. It shaped the way I cook. My favorite recipes never made it into the magazine, though. If you were to line up 12 recipes for the same thing, I guarantee I could pick out the Cook’s recipe. It’s balanced to a fault. Nothing offends anybody. I cook with bolder flavors.

Q. Will you revisit the food truck idea?

A. That struggle is not over. I would love to see a huge truck scene. At one time a friend asked me what was my goal in my food writing and food cooking career. I just want to have more great places in the world, and more immediately in this town, so that I can go eat.