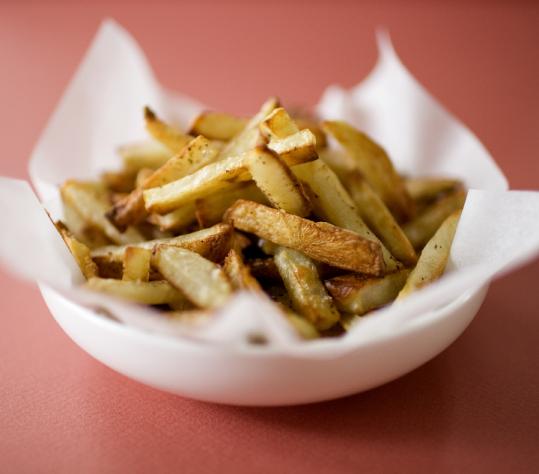 If you have a mandoline, your work is a breeze. Cut the potatoes crosswise into thin rounds, then stack the rounds and cut sticks. You can’t fit more than two potatoes on a sheet. Make these in advance and then tip the matchsticks from both sheets into a deep baking dish; reheat in a 400-degree oven for 20 minutes, tossing several times.

1. Set the oven at 425 degrees. Have on hand 2 large rimmed baking sheets.

2. Cut the potatoes into matchsticks. In a large bowl, toss them with oil, salt, and pepper. Divide the potatoes between the sheets and spread them out.

3. Roast the potatoes for 55 to 60 minutes, turning several times with a wide metal spatula, or until they are golden. Watch the edges of the pan, where some sticks will brown before the others. During the first half hour, the potatoes will release their moisture; they’ll start cooking more quickly during the last half hour. Transfer to a bowl and sprinkle with more salt. Sheryl Julian