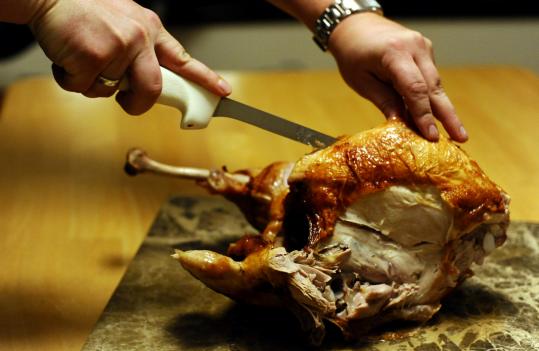 Deep-frying a turkey can be dangerous if you’re not careful, but it’s not difficult. (Christine Hochkeppel for The Boston Globe)
By Devra First Globe Staff / November 25, 2009

Do an online search for the words “deep-fried turkey’’ and it will not be long until you stumble across a video of someone creating a giant flame ball that burns down his or her house and possibly half the town. That, friends, is why I recently decided to attempt this feat. Danger makes me hungry. And so does turkey. Enough people have told me that after tasting deep-fried turkey, they will never, ever put a bird in the oven again. Ming Tsai deep-fries turkeys. Michael Leviton deep-fries turkeys. Alton Brown deep-fries turkeys. Paula Deen deep-fries turkeys (like you had to ask). These people know what’s what. This year, I want my Thanksgiving turkey to be the juiciest, most flavorful ever, with the crispest skin. Could deep-frying be the key?

The first step in finding out was to track down a turkey fryer. I’m not the only one who keeps hearing how great deep-fried turkey is, apparently, because in the month before Thanksgiving, kits are available at half the hardware and sporting goods stores in town. I picked one up at Lowe’s for about $65: a Masterbuilt 30-quart propane turkey fryer that came with pot, burner, hose, thermometer, turkey rack, and lifting hook. (If I’d had my druthers, I would have purchased a similar kit made by Bayou Classic, which gets good reviews. You can order it on , if you’re not out for instant gratification.) All I needed now was a turkey, the propane tank from our grill, and an alarming amount of peanut oil. You can substitute a different kind, such as safflower; just make sure it’s one with a high smoke point. I obtained a 35-pound vat at Costco for about $30. Deep-frying a turkey is not necessarily the most economical kind of cooking you will ever set out to do, but the oil can be strained and reused. If you want to justify the expense of the deep-fryer, just tell yourself it’s also a seafood boiler: two tools in one. For the safety-inclined, there are also oil-free turkey fryers that use infrared heat. To me, if there’s not a vat of hot oil, it’s not deep-frying.

Next, it was time to determine how much oil to use. The best method for doing so is to put your turkey in the pot and pour water in, keeping track of how much, until the turkey is submerged by an inch or two. The amount of water you used is the amount of oil you will need. After, dry your pot thoroughly. When I broke out my pot, I discovered it had a fill line already marked, so I skipped the measuring step.

On to preparing the turkey. Ours was fresh, but if you use a frozen one, make sure it is thoroughly defrosted. Also, be sure to remove any plastic pop-up devices, possibly the only thing in the world that doesn’t taste good deep-fried. For the outside of the bird, I kept things simple and rubbed it with a healthy amount of kosher salt, figuring a significant amount of whatever went on the skin would come off in the oil. Then I used a syringe-like marinade injector to flavor the meat with a mixture of chicken broth, beer, Worcestershire sauce, and Frank’s hot sauce - in other words, a bunch of stuff I had handy. You probably already have your favorite rub and marinade; I’m pretty sure you can’t go far wrong in this department. Ideally, you’d let the turkey marinate overnight, but see above point re: instant gratification. We let it sit around for a few hours while we drank bourbon and ate cheese. One of the best things about frying a turkey is that it’s a great excuse to have a party: holiday optional.

One of the other best things is that the bird takes very little time to cook. A 12- to 14-pound turkey needs to roast for 3 to 3 1/4 hours. A bird of the same size will fry up in 36 to 47 minutes. For deep-frying, a good rule of thumb is three minutes per pound, plus an additional five minutes for bigger birds. (For a truly giant bird, you might be better off using the oven, simply because your pot will only accommodate so much turkey while still cooking it efficiently.) So when hunger pangs began to strike, it was time to heat the oil.

It must be said, though it almost goes without saying, that turkey frying should only be done outdoors. We lucked out with a clear, warm day. Right now the long-range forecast is predicting lows in the mid-40s and a 30 percent chance of rain for Nov. 26. Bad weather could make your short cooking time feel significantly longer. We also quickly learned that our propane tank was empty. Not a problem on a random Sunday afternoon, but if you plan to deep-fry a turkey on Thanksgiving, when stores are closed, check your tank beforehand. Yes, I know, we were sure we had just filled ours, too.

When the oil reached 350 degrees - which took about 15 minutes longer than the half-hour I expected - I dried the bird thoroughly, inside and out. Hot oil plus water is not a good combination. Then the turkey went on the rack, we turned off the burner, and we lowered the bird into the pot. The oil bubbled up in true Macbethian fashion - if you leave the flame burning, this could indeed double your toil and trouble. After the oil subsided, we relit the flame to bring it back to temperature. We then discovered two things: The pope’s nose wasn’t quite submerged, so the fill line on our pot wasn’t particularly trustworthy; we could have used a few more inches of oil. And the oil didn’t want to reheat. No matter how high we turned the flame, we struggled to keep the temperature at 350. Previously worried about the oil getting too hot - for safety’s sake, don’t let it get above 400 degrees - we were now concerned about it not being hot enough.

Really, we shouldn’t have worried. Frying a turkey can be dangerous if you’re not careful, but it’s not difficult. About 35 minutes later, we were pulling a beautiful, golden-brown bird out of the pot. A thermometer inserted into the breast registered 160. We put the turkey on a plate and let it rest for a few minutes to let the temperature get a bit higher and to keep the juices in.

Then we carved it. The turkey was visibly juicy. Would the meat taste as good as it looked? Simply: yes. It was tender and full of flavor - even the white meat, which may have been the juiciest white meat I’ve ever had. The skin was crisp, though not as crisp as it would have been if our oil had stayed consistently at 350. Nonetheless, I don’t think I could produce a turkey quite this delicious in the oven. (Nor could we have made an impromptu batch of onion rings, though, sadly, we never got around to battering and deep-frying our leftover Halloween candy.) And with the turkey in the fryer, there’s room to bake even more pies.

On the other hand, when I sign up for Thanksgiving, I’m signing up to spend time with friends and family, usually indoors and in a semi-civilized fashion. I’m not signing up to baby-sit, which is what one has to do with a deep-frying turkey. There are few things better than cooking food outdoors with some of your favorite people, but that feels more like tailgating, less like a holiday of humble gratitude. Also, there’s something about the house filling up with the smell of the roasting bird, hour after hour. And there’s something about gravy - oh, gravy, it’s not Thanksgiving without you. If you deep-fry your bird, there are no pan juices. You’ll have to make alternate arrangements, which may mean you wind up roasting a bunch of turkey pieces anyway (you can buy spare parts and/or use your turkey’s neck and giblets for this). Also, some say fried turkey leftovers don’t taste as good as roasted. I wouldn’t know. There were no leftovers.

Ultimately, I think our Thanksgiving turkey will wind up in the oven this year, simply for logistical ease: It means preparing everything in the kitchen, rather than running in and out. But the winter solstice is coming up in less than a month. It sounds like a fine excuse for a party. 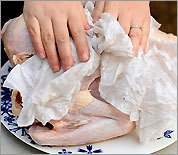 Step by step: How to deep-fry a turkey