A warm welcome in the South End

Teranga brings the tastes of Senegal to city 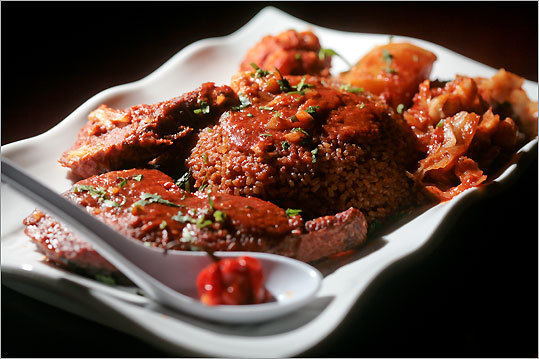 "Teranga’’ means hospitality in Wolof, but it’s more than just a word, according to Marie-Claude Mendy, who made it the name of her restaurant. In her native Senegal, it’s a way of life, an integral part of the national character and a matter of pride. It fits Teranga, a tiny and charming new Senegalese restaurant in the South End. Teranga offers a familial kind of hospitality, not formal but warm. And it’s more than just a restaurant. It’s the fulfillment of Mendy’s longtime dream to open one - despite the fact that she still works full-time at a French asset management company.

“Everyone tells me I’m crazy,’’ she says by phone. “My strongest point is I like to be the underdog.’’

Until Teranga opened in May, Boston didn’t have a Senegalese restaurant. (No surprise - Boston is short on African restaurants in general.) Expats had to head to New York to visit one. Now they come here, along with former Peace Corps volunteers and South End residents. It’s not uncommon to find Senegalese families spanning three generations, gay couples, French speakers, and stylish 20-something Africans eating side by side. Teranga exhibits a particular brand of cosmopolitan vibrancy one doesn’t see that often in Boston. Does it feel like New York? Not quite. Paris? Closer. I’m guessing what it most feels like is Dakar.

The restaurant is stylish, too, done in a neutral palette with zebrawood accents, lights encased in large, round shades hanging from the ceiling. There’s a cute little bar. Tables are adorned with carved gourds, and modern African paintings hang on an exposed brick wall. The decor is also modern African; it reflects the origins of the food without trumpeting them in theme park fashion.

The menu makes great use of fish and lamb, cassava and sweet potatoes, onions, and rice. Mendy does some cooking on evenings and weekends, splitting the duties with chef Kadija Sylla. There is no pork - Senegal is a predominantly Muslim country. (There is, however, a pretty nice wine and beer list.) There is also - surprising to me - a distinct Vietnamese influence. Mendy explains later that people from the former French colony who went to fight in Vietnam brought back dishes such as nems (spring rolls) and fried rice. “You can’t go to a Senegalese party and not have nems,’’ she says.

The ones here are delicious. They’re wrapped in rice paper that’s fried so it’s still chewy but crisp on the edges, bubbly in a way that looks like the skin of fried chicken. They’re filled with chicken, beef, vermicelli, carrots, and mushrooms. There’s a meat-free version available as well, although Teranga is not geared toward vegetarians; all of the entrees contain meat or fish. The spicing on the nems is slightly sweeter than at many Vietnamese restaurants around town. The springy texture of the skins is addictive, kind of like a moonbounce for your mouth.

There’s also a salade Vietnamienne, made with rice vermicelli and many of the ingredients found in the nems. This could be very good, but the night we have it the vermicelli is undercooked. Better is the salade ordinaire, which, actually, isn’t ordinaire at all. It’s a mix of greens, potatoes, sweet potatoes, beets, and hard-boiled eggs with a coconut-lime dressing. We wish for more of the sweet-tangy dressing, a flavor profile Teranga plays well with: It’s exemplified by a dipping sauce that comes at the beginning of each meal and changes slightly each time, vinegary and sweet, sometimes spicy, sometimes with fennel seeds floating on its surface. It makes sliced bread that is otherwise very ordinaire something special.

Other appetizers are variations on the theme of fried. Accara are little fritters made from black-eyed peas, served with a bit of salad and tomato dipping sauce pooled in a white Chinese soup spoon; Teranga’s dishes are generally plated with finesse. Though the fritters are nicely fried, the flavor of the black-eyed peas doesn’t come through. Fataya are samosa-like turnovers filled with fish. We liked these; with stronger spicing in the filling we might have loved them.

One requisite dish is the thiebou djeun, not because it’s the best thing on the menu but because it’s the national dish of Senegal. It’s a composed plate of different ingredients - fish stuffed with herbs, plus cassava, cabbage, eggplant, and more - served with a cylinder of red-brown broken jasmine rice. And, in fact, sometimes it might be the best thing on the menu. Sometimes it’s not. “No matter how well versed you are in making it, it’s hit or miss,’’ Mendy says. “Sometimes you make it right, sometimes you don’t. We’ve had to throw away whole batches.’’

The dish is so tetchy because of the rice, which must be perfect: not sticky, not undercooked. Dried grouper is what gives thiebou djeun its unique flavor. A cube is fried with onions and tomatoes till the mixture is the proper terra cotta hue; then the cook adds water, fish, and vegetables and lets it simmer. At first thiebou djeun was only available on the lunch menu, because Senegalese eat dinner late and find rice too heavy at that hour. Mendy has now added it for dinner, trading a bit of authenticity for exposure.

What might be the best dish on the menu, consistently, is the yassa guinaar, which manages to make grilled chicken interesting by topping the meat - moist and smoky - with a fantastic sauce of lemon juice and caramelized onions. Or perhaps the best dish is the dibi, thin-cut grilled lamb chops with another onion treatment. This time it’s a kind of pickle, raw onions marinated in mustard, lime, white pepper, and olive oil: delicious. On the side, a pile of bright orange sweet potato fries. All told, the menu offers five onion treatments, each one different.

Chicken also shines grilled simply on a skewer, with a spicy onion sauce and fried sweet plantains. Poisson braise, a whole grilled tilapia, comes with a side of atthieke, which is like a more interesting couscous, made from cassava. The tilapia is very good on one visit, but fishy-tasting on another. Sometimes lamb can be tough in dishes such as michoui (a roasted shank with herbs, caramelized onions, and Moroccan couscous) and mafe (a stew in a ground nut sauce).

Teranga’s desserts distinguish themselves from the sea of sameness on the sweets portion of many Boston menus. Millet beignets, flat and lightly sweet, come with creme anglaise and citrus sauce. A sorrel creme brulee gets a layer of tartness from hibiscus. And thiakry is a sort of African kheer, made with couscous and mango. You won’t find these at Bistro X. Likewise a trio of lovely drinks - ginger, sorrel, and bouye, or baobab juice - all complex and tinged with things like pineapple juice, orange flower water, vanilla sugar, and coconut milk. (They fairly beg for a shot of rum.)

Mendy’s mother sends her many of the ingredients for the juices from Senegal, as well as spices and other items that are difficult to come by here. Teranga offers a taste of home for Senegalese diners. For others, it offers the pleasures of discovery.

Noise level On the loud side.