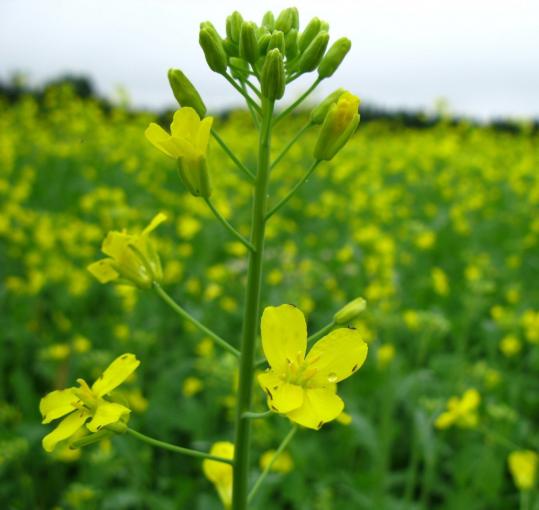 Peter A. SmithFarmers in Aroostook County, Maine, grow canola plants along with potatoes, and believe the oil can be a new cash crop. (Peter A. Smith)
By Peter A. Smith Globe Correspondent / May 27, 2009

In the lush St. John River Valley, at the northern tip of Maine's Aroostook County, Rodney Chamberland has been working straight out plowing and planting over 100 acres of seed potatoes. The farm's potatoes come first.

Then, Chamberland plants rotation crops. One he's seeding this spring will turn into 30 acres of flowering yellow canola. The crop not only improves the potatoes he'll grow on the same land next year, says Chamberland, but its seeds will also be pressed into one of the Northeast's only regional cooking oils: Maine Natural Oils.

"I'm just hoping that this little company takes off," says the grower. "If they do, I want to be at the forefront of that."

Most canola grown in Aroostook County goes to Canada, where canola was first developed by agronomists 30 years ago and where most North American canola continues to be processed. Canola, derived from "Canada oil, low erucic acid," is a close genetic mustard-family relative to rapeseed. Canola has been bred to remove inedible compounds (erucic acid) and ones with a biting, mustard flavor (glucosinolates). The United States Food and Drug Administration approved canola's use in 1985, and US farmers appear to be growing it with increasing regularity. But until this year, little canola oil was processed anywhere north or south of the Canadian border. "The whole local food movement encapsulates what we believe in," says Steve DeMaio, one of the partners who started Maine Natural Oils. "Why ship canola seed from Aroostook County to Winnipeg to have it come back as oil? We just think this is something that makes sense."

This winter, Maine Natural Oils, a new agricultural enterprise in the heart of Maine's traditional potato-growing region, built a mobile oil press at a warehouse in Houlton, I-95's northernmost town. The company squeezed 100 gallons of oil this month, and plans to press about 20 tons of seed into cooking oil this spring.

Three of the company's four business partners - DeMaio, Peter Sexton, and John Cancelarich - had talked about creating a biodiesel plant in northern Maine for years. The three eventually decided to extract an edible oil from the seeds of canola plant. In 2008, they formed a partnership with Doug Callnan, the owner of a local feed company, and the partnership purchased canola and mustard seeds from two family farmers in the St. John Valley. Now that they pressed their first batch, a few farmers have signed on to plant seeds for September's crop.

The Maine Natural partners say they'll reduce the distance cooking oil travels to reach home cooks on the East Coast. They're also hoping canola could be a boon to the region's potato farmers as a potentially lucrative rotation crop. "I think agriculture in the Northeast has been in decline for a long time," says Sexton, an adviser and a crops specialist at the University of Maine Cooperative Extension in Presque Isle. "I'm hopeful that this is something that will develop over time to benefit the community - here in Aroostook County, as well as the people in New England who want buy it."

Their canola seeds have not been genetically modified and the company plans to label the oil as "GMO-free." It will begin showing up in Maine stores this year.

There's another feature that sets Maine canola apart from others. Unlike most commercially processed canola, which is chemically extracted, Maine Natural uses a process similar to cold-pressed olive oil. A press crushes the tiny round seeds and yields an extracted oil with a distinctive, rich yellow color. The oil has a light, subtle mustard flavor, Sexton says, which "kind of reminds you of the smell of canola fields."

One avid Portland cook says the Maine-made cooking oil would be a welcome addition in the shop where she works. "I am more than all for it," says Leslie Oster, the general manager of Aurora Provisions and a Slow Food Portland organizer. "Now, if we could just get someone to invest in a full-scale wheat production mill."