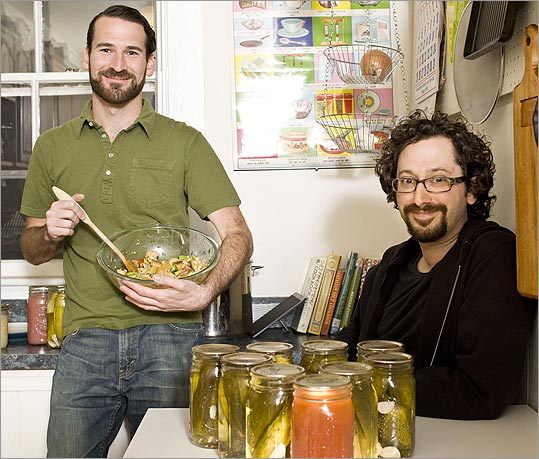 In the summer, it's easy to jump on the locavore bandwagon. Daily farmers' markets sell ears of pale gold corn cloaked in wet silk, green beans slender and unwrinkled, juicy stone fruits whose sweetness you can smell from yards away. CSA shares bring heirloom tomatoes, heaps of tender salad greens plucked from the ground the morning they're delivered, fresh herbs with dirt still clinging to the roots. It's a joy to eat locally more than it is a challenge.

In the winter, however, even the most committed New Englander could be forgiven for falling off that wagon. People cite deeply felt reasons for becoming locavores, or those who choose to eat food grown and produced in the region where they live. (The term was coined in 2005 by a group in the Bay Area and has since become ubiquitous; it was the New Oxford American Dictionary's word of the year for 2007.) They want to support the local economy, eat what tastes best right now, minimize food miles, maximize nutrition, connect with their communities, and live in tune with the seasons. But after enough root vegetables, oranges from California and blueberries from Chile could start to look pretty appealing.

Not necessarily, say many who eat predominantly local food throughout the winter. With a little planning, it's surprisingly easy to be a locavore in the winter. Even in New England.

For one thing, "there's a lot to eat right now," says JJ Gonson, a personal chef who lives in Cambridge and embraces the term locavore. "I believe in eating with the seasons. You eat a lot of fruit and vegetables all summer long and just power pack those things. In the winter, you hunker down and eat more roots and meat. They keep you warm and give you the energy you need."

Gonson cooks regional food as much as possible for her family and clients. Parsnips, carrots, beets, and celery root are winter staples, she says. "This year the parsnips are really good." She stocked up on potatoes at the end of last year's farmers' market season and is storing them in her basement, where they'll keep for months.

Though the origins of fruits and vegetables are sometimes labeled at grocery stores, CSAs (the initials stand for "community supported agriculture") make local food particularly accessible. Individual farms sell shares of their produce, and the goods are delivered to a predetermined spot each week. Participants simply have to pick up their box - no choices here. Though summer is prime CSA season, several farms offer winter shares as well: Drumlin Farm in Lincoln, Waltham Fields Community Farm, and Brookfield Farm out of Amherst, for example.

"The easiest way to do it is to join a winter CSA," says Waltham resident Tammy Donroe, a freelance writer and creator of the blog Food on the Food. She became interested in a regional diet when she took part in the annual Eat Local Challenge, whose participants eat locally grown food for 30 days. "I did it to see if it could be done, kind of like a dare," she says. "Then I realized how much was around and how good it was. The [producers] we met were so passionate. It's hard to walk away from that. It's like brand loyalty humanized."

Her family purchased a winter share from Drumlin last year. "We got root vegetables and lots of squash - lots of squash. We got Brussels sprouts and kale before it really froze. There was celery root and turnips and carrots and rutabagas, onions, basically all the storage vegetables. So it's really not hard at all."

She pauses and laughs. "I shouldn't say that. You have to like those things. By the end of the winter you're really ready to be done with root vegetables." Without a winter CSA share this year, she is finding it much more difficult to eat locally; she plans to sign up again next winter.

This year, as a countermeasure to turnip fatigue, Enterprise Farm in Whately and Heavens Harvest Farm in New Braintree are offering winter shares centered on the concept of an East Coast "foodshed." Some of the produce comes from their farms, some from farms as far south as North Carolina and Florida. It stretches the concept of local, but it allows shareholders to have variety, while transporting food a relatively short distance. (Shares cost $110-$180 a month, depending on the farm and share size.)

"I'm a little ambivalent," Gonson says of the idea. "You can stretch local as far as it needs to go. The question is where do we draw that line. I have a 5-year-old and a 7-year-old and I want them to eat things that are healthy for them all year round, so I love it from the point of view of a mother who wants her kids to eat citrus in February. But I don't love it as somebody who thinks there's a lot of carbon involved in transporting heavy pieces of food that far."

In peak season, Gonson freezes blueberries, spinach, rhubarb, and more for later use. Cambridge residents and new locavores Erik Zornik and Ryan Gray stock their freezer with the likes of homemade pesto and corn. The couple also canned tomatoes and pickles at the end of the summer.

"This is our first winter, so it's challenging," says Gray, who works in the engineering library at MIT.

"It's become more and more challenging," says Zornik, a neuroscientist in the biology department at BU. "In January we first started having to say 'Oh God, what do we have?' I'd go to Whole Foods or Savenor's or the co-op and say, OK, what's local? There was a lot of green cabbage and bok choy. . ."

"There were too many sweet potatoes," Gray says.

"I'd come back with, like, sweet potatoes and some cranberries," Zornik says. " 'Here's dinner!' "

"We made corn and jalapeno pizza, and it was awesome," Zornik says. "Summer pizza in winter."

Heather Wernimont, an Iowa native living in Somerville, cans tomatoes, peaches, and apple sauce, as well as several varieties of jam. "It's really getting me through the winter as far as my fruits," she says. She also sprouts beans as a substitute for lettuce. Wernimont works for a nonprofit that facilitates language-learning clubs; she became interested in seasonal eating when she lived in Japan, where the concept is ingrained, and New Zealand, where she learned to preserve food. "I traveled the world in order to find my Iowan roots," she says. "Growing up I wasn't interested in any of this. My mother didn't grow food or preserve. Now when I'm preserving my food I'm able to make new connections with my 87-year-old grandmother."

She does make one exception to eating locally: raspberries, which she has every morning. This summer she'll freeze enough for next winter. "I'm in no way a purist," she says.

Most locavores agree there's no need to be rigid - eating locally, after all, often stems from a passion for delicious food. "If somebody offers me a bite of Belgian chocolate, I'm going to eat it because it's good and I love food," Gonson says. Gray and Zornik make exceptions for things like celery, which they use in making stock.

Then there's that modern necessity, coffee. "I don't just need coffee, I love coffee," Zornik says. "It's the center of my world and I'm happy to support it."

And with foods such as meat and dairy, it's easy to eat locally in the winter. Stillman's and Chestnut Farms, both in Hardwick, and River Rock Farm in Brimfield offer meat CSAs, for instance; Lionette's Market in the South End specializes in local, sustainably raised meat, and the Dairy Bar in Somerville offers milk, yogurt, eggs, and more. The meat is more expensive, but each person interviewed says it is worth it to know where and how the animals were raised. Also, all agree, it tastes better.

For those who want a break from cooking, locavore consciousness is permeating restaurants as well. Craigie on Main , Persephone, and T.W. Food are among those serving locally; Tomasso Trattoria in Southborough offered an all-local dinner last month, while Beacon Hill Bistro recently instituted a wintertime "Local for the Locals" menu Sunday-Thursday evenings. It's not just fine dining. Eating locally extends to your burrito, though perhaps not in the winter; during the growing season, Chipotle purchases a percentage of its produce from local farmers. Stone Hearth Pizza Co. uses regional ingredients when available.

Wernimont believes it's not just worth the effort to eat locally, it's necessary. "I believe the adoption of sustainable food systems is imperative in ensuring the future health of our planet and its people," she says. "I really do not think we can keep going on the way we're living."

In spite of our long winters, she says, New England is in fact an ideal place to be a locavore.

"What's great here in Boston is that there are skill sharers," she says. "People are presenting workshops on how to do this stuff. It's really just building up. It's really easy. And it's enjoyable."