From family farm to family restaurant 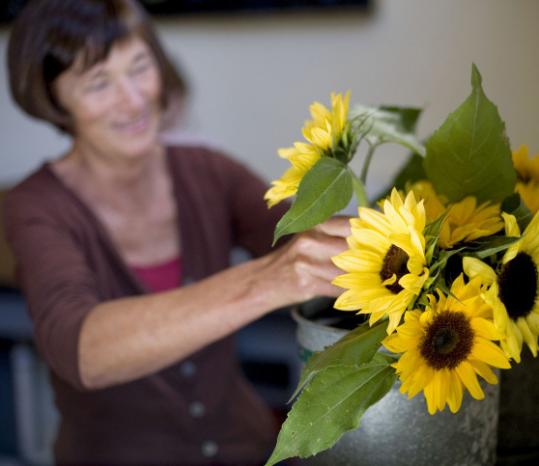 BELFAST, Maine - Penny Chase, 61, rattles down winding roads from her family's farm in Freedom, Maine, to Chase's Daily - their grand farm-stand restaurant on Main Street here. Before noon she pulls up to the back door and unloads produce grown by her husband, Addison, 61, and daughter, Meghan, 32. From crates in the back of the old white-panel truck come heirloom tomatoes, slender haricot verts, crisp arugula, fingerling potatoes, exotic herbs, ripe melons, flowers, ornate cabbages, and an earthy rainbow of beets, chard, and carrots.

Chase's Daily is part farm stand, part groovy vegetarian restaurant, and part all-day cafe. In 2000, the slender, suntanned Chases bought the big brick building - a soaring four-story Oddfellows Hall built in 1888. They pulled plaster off the brick walls, exposed molded tin ceilings, and shined up the tongue-and-groove maple flooring. They tore down a chicken house to build the kitchen. Chase's is a family effort. Addison and Meghan handle the growing; Meghan's boyfriend, Ted LaFage, runs the kitchen with Penny; and another daughter, Phoebe, 34, does the baking. "This place works because everybody has a different passion," says LaFage. "If anybody bailed out, the whole thing would crash."

Galvanized tin wash tubs and wood crates hold the bounty, which is reasonable priced, the numbers hand-written by Penny on wooden shingles. Meghan's farm-inspired oil paintings hang on walls. Phoebe's wares - she's been baking since the early morning - fill the counter: rustic and fancy tarts, cookies, cakes, and crusty loaves. The kitchen is buzzing with chatter. LaFage, tending to the pizzas, makes sure everything is ready for the midday deluge.

What the Chases have managed to do is use what they grow themselves, and offer an inspired and eclectic menu with simple dishes from around the world. On any given day, you might find an Italian heirloom tomato salad; perfectly charred thin-crust pizzas, heaped with arugula leaves; Thai fried rice; and potato tacos. In some restaurants this sort of edible diversity doesn't work; at Chase's all of the elements are from that one piece of land, which seems to tie the dishes together.

Addison and Penny met at Lake Forest College in Illinois. During the Vietnam War, he got a teaching deferment and they moved to Maine. They bought 500 acres of farmland in Freedom, an agricultural community. In the early days, Addison raised beef cattle, chickens, and vegetables, which he sold on the wholesale market. Penny taught at the local elementary school. In the mid '90s, they started to shift their focus to market gardening. The girls spent summers growing vegetables and selling them at farmers' markets. After college and time working in New York, both ended up back in Maine.

Chase's Daily evolved, and was a family project from the start. They need the whole crew in order to offer lunch five days a week, brunch on Sundays, and dinner on Friday nights. Unlike many restaurants in this part of Maine, they're open year-round, buying vegetables grown in other parts of the country.

Today, the crowd is the usual mix of tourists and regulars, vegetarians and meat eaters, back-to-the-land hippies, tattooed hipsters, well-heeled retirees, and hard-working dudes from the local fishing boats. Bathed in bright light and cooled by salty breezes off of Belfast Bay, everyone is soaking up the brief glory of local Maine food.