As food prices rocket, relief from the depths 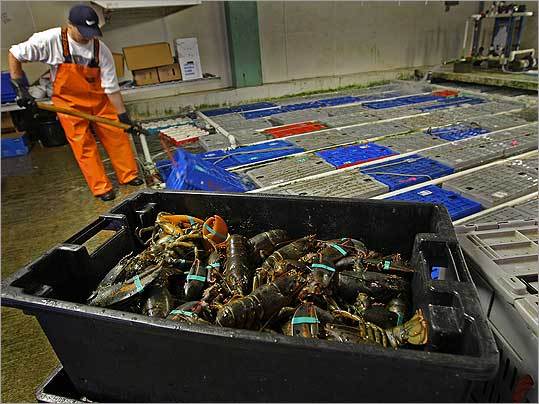 Lobster prices have declined, but demand has not increased, which has hurt lobstermen and such firms as James Hook in Boston, where Mario Hernandez checked stock. (David L. Ryan/Globe staff)
Email|Print|Single Page| Text size – + By Devra First Globe Staff / July 30, 2008

Consumers, squeezed by rising prices on everything from milk to eggs to bread, are finding a rare - and surprising - bargain at the fish counter: The price of lobster is going down.

Last year at this time, Boston-area lobstermen were getting $5 to $5.25 per pound, according to the Massachusetts Lobstermen's Association. This year they're getting only $4.50 a pound. That's translating to lower retail prices.

At Yankee Lobster and James Hook & Co., both located in Boston, the price for soft-shell lobsters - those that have recently molted and have less meat - is currently $6.99 a pound, down from last year's price of $7.99. Soft-shell lobsters represent the bulk of the local catch right now.

The harvest has been plentiful, yet demand has declined, say those in the industry. Consumers view lobster as a splurge, and with money tight, it's not a priority on the shopping list.

"If the economy is not too strong, it's hard to get people interested in lobster," said Bill Adler, executive director of the lobstermen's association. "It's not bread or milk. One of the first things people will say is, 'I'll just go without the lobster dinner.' It's a celebration food."

Restaurants are trying to make the most of the situation, offering lower-priced lobster specials in hopes of luring customers.

Kingfish Hall, for example, is offering a different lobster dish each day for $25 a plate through August. Last year, similar dishes at the Faneuil Hall restaurant would have cost diners nearly $60, according to executive chef Katherine See.

"Sales across the city are down at restaurants, and it's definitely helped providing an incentive," See said. "It's proven to be really popular. We prepare 50 or 60 portions an evening and we easily sell out of that."

At Excelsior, overlooking the Public Garden, a "Lobsterpalooza" promotion promises a different $30 lobster entree each week through the first week of August. It's having the same effect.

"A lot of people are coming in for the lobster special," sous chef Al Stubbmann said. "We were coming up with ideas to bring in different demographic groups. We tend to get a more upscale crowd, and we were trying to get more people to come in who might not want to pay $40 for an entree."

But if lower lobster prices are a boon for diners, they're disastrous for lobstermen, who've been hit with a triple whammy: In addition to the downward trend in prices, they're contending with higher costs for fuel and bait.

"I don't think there's ever been an off-year like this," said Bob Bayer, executive director of the Lobster Institute, a research and education organization at the University of Maine in Orono. "It's a grave economic hardship."

Because lobster is highly perishable, fishermen can't raise their prices to offset higher operation costs: Dealers know they have to unload it quickly - even more so during the current soft-shell season. The tender soft shells must be consumed locally, as they can't survive shipping.

"An electrician or a plumber, if the price goes up on materials, he passes that on to the customer," said Skip Ryan, 65, of the Squantum part of Quincy, who has been fishing for lobster for almost 50 years. "If we're catching a lot and the dealers can't move it, the price goes down. I can't say, 'Guys, you gotta ante up another 25 to 50 cents a pound.' You're your own boss, but you're not in charge of your destiny."

Although Ryan said he's made about the same amount of money as he had at this time last year, the high fuel and bait costs are changing the way he operates. Instead of going out six or seven days a week, he's taking weekends off to save on fuel.

"The last two weeks I've baited my traps fairly heavy and let them sit a little longer," he said. "I used to invest in IRAs, CDs, the stock market. I'm not doing that anymore. There's very little after I pay all my bills. But I'm not crying poormouth. I'm still in business."

Adler said he worries about the industry's long-term health, however. In an average year, about half of what a lobsterman earns goes to running the operation, he said. Now the take-home cut will be even less.

"If a guy brings home $30 for the day, it doesn't compute," he said. "I'm concerned about whether these guys can continue to get in the boat, go out, catch lobster, come in, get a decent price, and when the bottom line is finished, they've got something to bring in."

The equation is scaring off younger lobstermen.

"Young guys with $200,000 lobster boats and payments to make, I see some of them looking for a second job," Adler said. "Not as many young people are going into the business as used to. They're smarter. They say, 'Dad, no way man, I'm going to be a lawyer.' "

Ryan said that 20 years ago, about 80 boats went fishing out of Boston alone. Now, he said, there are fewer than 20 left, and about half of the lobstermen he shares a dock with are in their 60s. "You don't have a lot of choices," he said. "You have to put your head down and go to work every day. A lot of us are just riding it out."