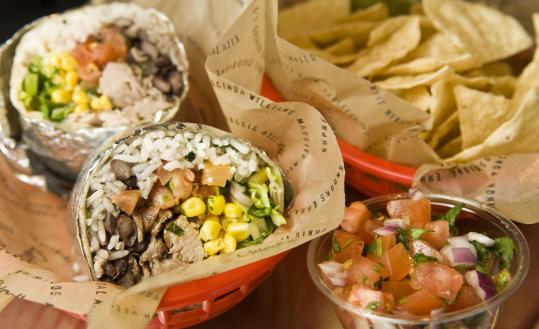 My friends will tell you I wouldn't be caught dead in a fast-food place, though the truth of the matter is, when I had a thing for fries, I went all the time. That was when the potatoes were cooked in rendered beef fat, considered so bad for you the company had to revamp the system. All that has changed (not that fries in better fat are on any cardiologist's list), and now my friends are right.

The folks at Chipotle Mexican Grill are quick to tell you that theirs isn't fast food, but rather "quick service" (the industry category is "fast casual"). This growing chain delivers sanitized burrito places, with nearly identical layouts, galvanized tin walls, stainless-steel tabletops, and a green outlook. Their manifesto (their word) about their food - organic, natural, unprocessed, family-farmed, and sustainable ingredients - makes it seem as if Chipotle is playing to every politically correct interest group around.

There's a certain arrogance to where they open - very close to similar but smaller burrito chains. Chipotle was started in Colorado in 1993 by Steve Ells, a graduate of the Culinary Institute of America and former cook at Stars in San Francisco. There are more than 700 locations, all company-owned. McDonald's was an investor for seven years, which allowed Chipotle to expand. According to spokeswoman Katherine Newell Smith, McDonald's "completely divested in 2006. They were a big investor and a very good partner, but they never had a word to say about how we did our food."

The chain came to Medford a year ago. Recently I ate at three locations - in Cleveland Circle in Brighton, Davis Square in Somerville, and Medford (there's another in Dedham; Peabody and North Quincy are coming this year; and Harvard Square opens tomorrow). This food is indeed fresh, it's made quickly, it mostly tastes very good, and the quality is evident. Counter workers are gracious, and the eateries are spotless. In the fast casual concept, you have no waiter, so your impression of the place can be formed by the counter person. If she or he feels bad that day, your experience is bound to be bad, too. Ours were all cheerful; someone has done impressive training at these sites.

You can order a burrito, which begins with a warm flour tortilla that's heaped with grilled chicken, steak, carnitas (braised pork), or barbacoa (spicy shredded beef), and black or pinto beans, along with cilantro-lime rice, plus add-ons: cheese, sour cream, salsa ($5.60-$6.45). Any of these come without the tortilla or as a salad (try grilled chicken, black beans, and hot salsa). On one visit, the chicken was hard and dry, the steak was tough on another, but all the beans were juicy and almost meaty, carnitas and barbacoa were both impressively spicy. Long-cooked meats and beans are made in Chicago and shipped out.

Other choices are tacos, three crisp corn tortillas or soft wheat tortillas with burrito fillings, or house-made chips (75 cents), which were thick and just OK once and very crisp the other times, with several dipping sauces ($1.50 with chips); tomatillo-red chili, the hottest, is the best. Bright green guacamole is too smooth but delightful anyway.

One night in Brighton we were so cold we contemplated eating in our coats, but this food is too messy for that. Davis Square is not crowded, especially compared to a bustling Anna's Taqueria down the street. Medford serves beer, always a plus, though the location outside a densely populated neighborhood seems odd for this company.

Chipotle delivers what it sets out to: quality and service. The irony is that they're doing a good job being the anti-McDonald's.