Natick collection eateries are a step up

It still has Sbarro and , Friendly's and . The Natick Collection may not call itself a mall, but it is one - the largest in New England, in fact. It's vast enough to play host to multiple microcosms. There's room for JCPenney and Nordstrom, Claire's and Louis Vuitton. A gelato and crepe cafe called Melt floats like a space station, suspended podlike in the atrium between rows of stores. On a Saturday night, the astronauts are played by teenagers wearing moon boots from the planet Ugg.

In all this acreage, there is room, too, for ambition. The Natick Collection stretches definitions of mall architecture with its organic curves and immense skylights. And it stretches definitions of mall dining with real restaurants, namely branches of Bos ton's Sel de la Terre and Chestnut Hill's Metropolitan Club. (Also present are P.F. Chang's, the , and Finale.) After spending gobs at Kate Spade and Burberry, there is no reason a shopper should be stuck eating greasy pizza and pretzel dogs. After spending nothing, there is no reason for that either. It's respectful that a conglomeration of stores designed to eat into the paychecks of a semi-captive audience should offer more than empty calories in return.

Of course, these restaurants can also be the sort that eat into paychecks. A full dinner and one glass of wine at Sel de la Terre will run you about $60 before tip. Lunch is more reasonable, with sandwiches priced at $8.95. The midday meal brings in shoppers for a taste of Southern France; dinner draws more from outside the mall. On a recent night, it's like a meeting of the Natick social club, as diners engage in rounds of "How are you?" "Nice to see you!" and "Isn't this place wonderful?"

And it is wonderful for area residents to have Sel de la Terre here. The restaurant's service is often wonderful - knowledgeable, warm, and attentive (sometimes overly so). Occasionally the food is wonderful, too.

The steak frites, for instance, rules the school. Each chewy-tender bite of the grilled black Angus rib eye fills your mouth with the taste of char and pure steakiness. And Sel de la Terre knows its way around a frite - these are skinny, golden, and fried perfectly.

The charcuterie plate is another hit: a round of hearty pate de campagne with a fig center; a slice of the silkiest duck liver terrine; and a few slices of house-cured duck prosciutto. (The prosciutto is the weakest link, more salty than meaty.) On the side are toasts soft and crunchy, grainy mustard, chutney, and cornichons. The accompaniments are bountiful, not always the case with charcuterie plates. Sel de la Terre doesn't stint when it comes to the details. There is always plenty of the restaurant's fantastic bread, and offers of more; when a glass of wine is corked, it's instantly replaced without question.

Some of the food is not wonderful but good. Roast chicken breast is slightly dry but with nicely crisped skin, the bird drizzled with bacon vinaigrette and surrounded by cubes of roasted turnip and bacon. Shortribs are tender but don't have the depth of flavor you want from a braise; the meat is much better in a nearly identical dish at the Boston branch of the restaurant. A banana frangipane tart is buttery and warm, with a mild almond flavor and soothing toppings of fromage blanc and coconut-lavender sauce (sounds weird but it works).

But some of the food simply falls flat. Like the flatbread. As advertised on the menu, it's topped with confit chicken, sun-dried tomatoes, aged gouda, and fresh goat cheese. There are sun-dried tomatoes galore. But I don't see or taste a single speck of chicken, confit or otherwise. And the two cheese concepts seem to have merged into one - aged goat cheese. There is a generous topping of dried-out crumbles. The dish looks like it staggered out from under a heat lamp, though the actual flatbread part is fine: crispy and nicely charred in spots.

Pan-roasted striped bass is cooked well but woefully under-seasoned. It's hard to see how a fish served with golden raisins, jalapenos, and pineapple-brown butter emulsion could be so tasteless. (The accompanying couscous, however, tastes like a pineapple scented candle.) Skillet-roasted salmon is downright unpleasant, dry and served with a pine nut coulis that's gritty and tastes like toasted paste.

Sel de la Terre treats its customers so nicely, though, they seem to forgive these missteps. And they're nice in return: The Sel de la Terre crowd is very civilized. On a weekend, people with reservations queue politely in the entryway, a space with immense vertical real estate and a bar where the TV is tuned to "Law and Order." Then they file into the dining room, a clean well-lighted place with bookshelves full of cookbooks.

There's less law and order at the Met Bar & Grill. People spill out the door and into the mall, waiting in their parkas to get in. Inside, the restaurant is dark and filled with hubbub. There's a hopping bar right by the entryway, with patrons clustered around drinking cocktails. Kids crane their necks for a look behind it, where burgers cook in super-cool, silver vertical grillers filled with leaping blue flames.

Those excellent burgers, handmade and cooked to order, are the highlight here. They appear on the "burger bar" menu, an addition to the regular menu that offers signature burgers plus a wide array of make-your-own options. The signature burgers have geographic names such as Vermont: The Farm (bacon, cheddar, and a fried egg) and Tokyo (a Kobe beef burger with soy sauce, wasabi mayo, and more).

If you make your own, you can choose from patty options including veggie and turkey, sizes from mini to double (the mini tend to get overcooked), several different buns or no bun at all, a wide selection of cheeses, and a crazy array of vegetables, meat toppings, and condiments. Sides include french fries, onion rings, sweet potato planks, and an arugula salad. For dessert, there are shakes that are tasty but far too thin; you can add booze to them if you choose. (Though with the Mudslide - vanilla ice cream, chocolate syrup, and four kinds of alcohol - there is no virgin option. "Sorry kids. . ." says the menu.) It's the perfect meal for an Atkins dieter, a vegetarian, a sybarite, and a 4-year-old to share. If the Met burger bar were to reverse-migrate back to the city, it would be a huge hit.

Next to the burger bar menu, the menu proper looks less compelling. Full of steaks and chops and pastas, it's heavy stuff. The Met LA chopped salad is an inoffensive medley of lettuce, bacon, avocado, egg, blue cheese, and more. It's something you might find at a Cheesecake Factory, if marginally smaller. A pressed Cuban sandwich is really more compacted - it's so dense and hard you could crack a tooth on it. Yet the insides don't hold it together, so the bread slides all over the place when you try to bite it. Bacon-wrapped beef tenderloin tips fail by virtue of fatty bacon that hasn't cooked to crispness. A trio of cookies is just OK - a chocolate chip, an oatmeal raisin with an oddly plastic texture, and a chocolate-covered pretzel (stretching the definition of "cookie"). There's chocolate sauce to dip them in.

Though the Met Bar & Grill has gained burgers, it's lost some of the clubbiness and polish that belong to its Chestnut Hill parent. It feels like what it is, an above-average mall restaurant. The Natick Sel de la Terre approaches the standards set by its Boston self, but it can disappoint in a way the original never does. Inside the Natick Collection, there is a "grove" of fake birch trees. A stroll beneath their verdant metal leaves is a lovely prelude to dinner. Like whichever restaurant you're about to eat at, this isn't the real thing, but it's an oasis nonetheless. 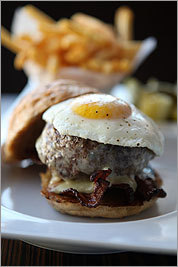 Noise level Raucous at peak times, but not so loud you can't converse.

Both restaurants are in the Natick Collection, 1245 Worcester St., Natick.