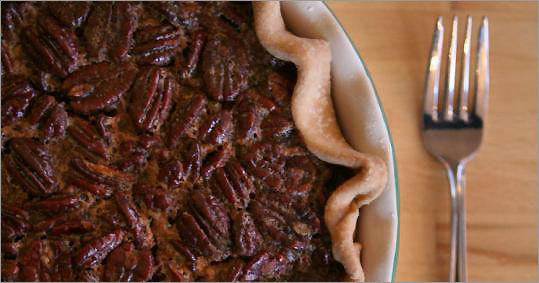 Several years ago, when her daughter developed a dairy allergy, my Aunt Raya, who has been making this pie for years, started using dairy-free margarine in her pies. You can use butter or margarine for both the crust and the filling.

1. Have on hand two 9-inch pie pans. Rub them lightly with butter or margarine.

2. In a large bowl, combine the flour and salt. With a pastry blender or two blunt knives, work in the butter or margarine. Add 3 tablespoons of the water and use a fork to stir it in. Continue adding water, 1 tablespoon at a time, until the mixture comes together to form a dough. Shape the mixture on a lightly floured board.

3. Divide the dough in half. Flatten each half into a disk. Wrap them in foil and refrigerate for 15 minutes.

4. On a lightly floured counter, roll out one piece of dough to an 11-inch round. Lift the dough carefully and transfer it to one of the pie pans. Roll out the other dough and line the other pan. Refrigerate both crusts.

2. In an electric mixer, combine the butter or margarine, brown sugar, and granulated sugar. Beat on medium-high speed until combined. Beat in the light and dark corn syrup, followed by the eggs, one by one. Add the rum.

3. Remove the bowl from the mixer stand. Using a spatula, fold in the pecans. Divide the filling between the pies and transfer to the oven.

4. Bake the pies for 30 to 40 minutes or until the centers look almost firm. Set on a rack and let the pies cool to room temperature. - Lisë Stern