High-end designers are competing for gold 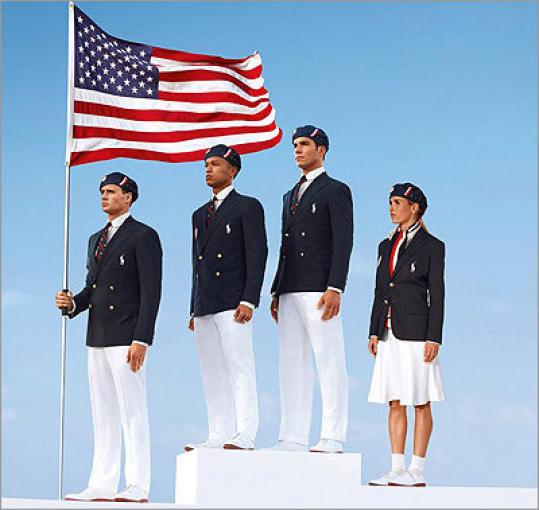 But for all the flashy names, the occasion is not a star-studded fashion show in New York or Paris, but the London 2012 Olympics. The Games have turned into the latest, and perhaps largest, runway for some of the world’s biggest designers hoping to reach a new audience and extend their brands.

When athletes pour into the Olympic Stadium for the opening ceremonies Friday, many will do so in uniforms created by designers better known for eveningwear than sportswear.

“The Olympics are one of the last places where designers haven’t aggressively worked to get their name out there,” says Rhode Island School of Design fashion historian and author Kathleen McDermott. “So of course fashion is storming in there. Here’s all these fabulous athletes we can idolize, while we admire the designs.”

Stella McCartney, daughter of Paul McCartney and one of the UK’s most prominent designers, has created swimwear, gymnastics uniforms, and other gear for this year’s British teams, in collaboration with Adidas. Italian athletes will sweep into the opening ceremonies in uniforms by Giorgio Armani. Preppy fashion icon Ralph Lauren, meanwhile, created red, white, and blue opening-ceremony ensembles for US athletes, but set off a storm of controversy this month by producing them in China.

While there has long been a connection between sports and fashion, the joining of these two worlds has never been as prominent — or as brand heavy — as it will be at the London Games, said Sam Hamadeh, chief executive of PrivCo, a New York market research firm.

“It all comes down to money,” says Hamadeh. “Ralph Lauren will make tens of millions of dollars selling Olympic-themed merchandise. Yes, there’s also the patriotism, but it’s money.”

Lauren has been designing for American Olympic athletes since 2008. The partnership has generally been a positive one, leading top designers from other countries to jump into the field as well. Now, high-end designers like Armani and McCartney will get a boost in the lucrative sportwear market, said Nancy Deihl, director of costume studies at New York University.

The Olympics have “always been a fashion show,” Deihl says, “but now it’s a luxury fashion show.”

It’s also a way for brand-savvy customers to own goods made by designers whose creations are usually only seen on the red carpet or the pages of Vogue. A quick look at online stores for Armani, Lauren, and McCartney shows a host of Olympic-inspired shirts, swimsuits, and hoodies.

Other top designers are hurdling into the scene as well, if not designing for the athletes themselves. Chanel creative director Karl Lagerfeld has created a line of Olympic-themed T-shirts — dubbed Team Karl — that went on sale at the British department store Selfridges on Tuesday. Chic New York boutique Opening Ceremony is setting up a 3,000-square-foot pop-up store in Covent Garden featuring Olympic-inspired products from designers such as Proenza Schouler and Band of Outsiders.

“In a way it’s quite similar to the Oscars,” says Patricia Cunningham, a fashion historian at Ohio State University. “There was a time when [the Academy Awards] was not about fashion. Now the fashion is almost as important as the awards. I predict something similar will start with the Olympics.”

The fashion world’s foray into the Olympic arena can be traced back to the Canadian company Roots, which began creating uniforms for Canadian athletes in 1998. Those designs caught the eye of Olympic committees in the United States and the United Kingdom. Roots designed clothes for the US team for the 2002 Winter Olympics in Salt Lake City, and created a sensation with its fleece berets.

During those Games, Sports Business Journal reported that sales of Roots US Olympic merchandise topped $25 million. Much of those sales were pushed by the popularity of the beret.

Seeing this opportunity, Lauren bid to design the US uniforms for the 2008 Games. In addition to clothing, Lauren’s Olympic-branded accessories this year include tote bags, hats, towels, and eyewear.

“The big money is in selling mass-produced versions of the uniforms,” says Hamadeh. “Consumers will want copies of those blazers, and will buy them in volume. The value of those tie-ins will be in the tens of millions. And there’s the intangible connection from the association.”

With that kind of business opportunity, fashion experts say that Olympic collaborations will become commonplace in coming years. It’s the first time many of the luxe designer names will reach the ears of sports fans, says Sondra Grace, chairwoman of the fashion department at the Massachusetts College of Art and Design.

“It’s all about product placement,” says Grace. “Everybody wants to be connected to the Olympics, and that extends to these designers as well. People get very excited about the Olympics.”

There is also the element of national pride, of designers creating something that puts their athletes in the best, and most stylish, light. Prada is designing the uniforms for the Italian sailing team. Paris-based Hermes, meanwhile, is outfitting the French equestrian team.

Designed in collaboration with Puma, her men’s opening ceremony ensemble in red, black and yellow includes a tuxedo stripe on the leg and a skinny tie. Athletes also have the option of wearing a military-detailed jacket that is black and trimmed with green. All pieces take inspiration from Bob Marley songs.

“I didn’t want our athletes dressed the same as other countries,” Marley said by phone from her home in Miami. “If I’m in the bleachers looking down, how would I see Jamaica? I would want my eyes drawn to our team.”

Despite the arrival of big designers at the 2012 Summer Games, not all countries have gone high fashion. With its government in the throes of an economic crisis, Spanish athletes got their Russian-designed uniforms for free, and have since openly mocked the garish red and yellow designs. The Hong Kong uniforms, from English brand Kent & Curwen, say “welcome aboard” more than “tough competitors” with their flight attendant-like jackets, trousers, and skirts.

“That’s the potential drawback of designing for such a prominent event,” says Grace. “There is no way you are going to please everyone.”

Summer Olympic uniforms around the world