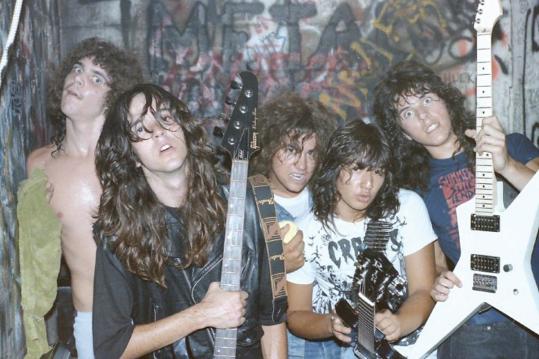 An image from ‘‘Live ... Suburbia,’’ which chronicles the misguided fashion trends of the 1980s. (POWERHOUSE BOOKS)
By Christopher Muther Globe Staff / September 29, 2011

“Live . . . Suburbia’’ could be a scrapbook, complete with doodles, recovered from the basement room of a teenager who fell into the “burnout’’ category of the high school caste system.

It’s almost easy to miss the essays written by Pappalardo and Gordon subtly tucked between the pages of photos. These essays and photographs do something that is rarely done: They celebrate a suburban teen culture that John Hughes never captured. These are the slightly rougher kids who were more interested in Megadeth than Johnny Hates Jazz.

“Every kid from the suburbs who dabbled in a subculture or who felt like an outsider wanted to move to a city,’’ says Pappalardo, who grew up in Lawrence before moving to Salem, N.H. “They’d get to the city, and it was not what they expected. By the time they got there, the uniqueness of the subculture had been taken away because it grew so fast. Being an outsider in the suburbs was more unique because it wasn’t so ubiquitous.’’

Pappalardo, who wrote the book “Radio Silence’’ in 2008 to document the style of the hardcore music scene, this time wanted to create a visual and literary history of an era rather than a musical genre. For people who grew up in the 1980s and early 1990s, there are photos of teenage rebellion and acid wash jeans that will spark memories of afternoons spent passing notes in stuffy detention halls, while the authors recall days cruising the Topsfield Fair.

“Both Max and I really focused on fashion in the book,’’ he says. “It was such an important form of communication then. Before everything collided and became the [fashion] collage it is now, it was so simple. If you wore a certain thing, then it meant you were a certain kind of person. You don’t see those kind of distinctions any more.’’

Which means “Live . . . Suburbia’’ is not exactly “The Breakfast Club,’’ and you will not see Molly Ringwald or Emilio Estevez (but you may see less polished and shabbier versions of Judd Nelson). But, as the authors point out, the clothing that was once rebellious now barely raises an eyebrow.

“Anthony and I focused on the fashion and really detailed the timeline on how these no-trends became trends,’’ Gordon says. “Especially how anti-fashion actually backfired and became something that everyone has now, seen to the point of being one of the more non-shocking styles out there.’’