THIS STORY HAS BEEN FORMATTED FOR EASY PRINTING
Trendsetter

Ramped up, decked out, ready to roll 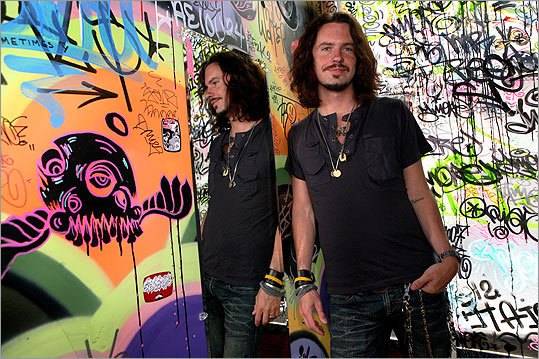 John Nichols wants to know you. Really. The 31-year-old skateboard and streetwear entrepreneur - who in 2000 opened a Technical store in Norwell and last year launched a second shop on Newbury Street with Aerosmith's Joey Kramer - dedicates his life to learning about people and what makes them tick. Creative freedom tends to be a theme, and both Nichols's eclectic personal taste and Technical's artistically uninhibited interiors reflect that spirit. Here's what someone who still wields a skateboard and declares Mom as his absolute hero has to say about the art of style and life.

Q. What are some of your most prized possessions?

A. I'm extremely sentimental, to a fault. Everything that I wear on my wrists, or my necklaces, anything, all have a story behind them. My girlfriend gave me this [points to a pendant]: It's part of the Atocha, a ship that went down in the 1600s off the coast of Florida. I'm a bit of a history buff. You name it, I have it. The only tattoo I have is "Patricia," which is [my mother's] name. I got it on her birthday, the year after she died. Everything that I go through in life, she's on my arm. So whenever I'm going through a really cool moment, I always try to roll up my sleeves. Super corny, but it's the truth.

Q. What are you driving?

A. I've had some pretty ridiculous cars in my time - Boxster, Supra, C280 Mercedes. Right now, I have an SLK320 convertible. It's a car that gets me from point A to point B. I like driving fast.

Q. How would you describe your style?

A. I've always gravitated toward things that are different. I really have never dressed to try to fit into a group; I've never actually really fit into anywhere. But I've always had a lot of good friends. I think that once you try to isolate yourself in a group with what you're wearing, you stop learning about other people.

A. Barking Irons is the best clothing company that exists, hands down. They're based in New York, and it's all vintage-inspired pieces. Really cool stuff [with] attention to detail. I wear Levi's all the time. I just bought two more pairs of the exact same jeans, 'cause I'm old and I'm like, fine, the things that I like now, get multiple pairs. And I like Alan Bilzerian on Newbury - that's a cool store.

A. I'll listen to any live music at all - rock shows, hip-hop. I saw Aesop Rock; he was really good. I saw David Gray; kinda on the lighter side, but I love him. I used to cut tapes when I was in eighth grade. It'd be, like, some random record that my mom had, and then all of a sudden it would cut to me scratching. It was so bad.

A. I just like being around real people, people that do things because it comes out of them - they have to do it. I think artists (musicians, media artists, fine artists, designers, all that) are some of the last real voyagers. They mentally navigate their own brain and others' to grab inspiration. I'm very turned on by that.

A. Jean-Michel Basquiat. I know I'm being really obvious with that, but he turned me on to art, and I became such a student. Futura 2000 is a great, great artist. He does his own thing. I'm so intrigued by graffiti artists that live below the radar. [Most] people don't know him, but to certain people, Futura's name is like God.

Q. How do you unwind?

A. I have a Shih Tzu that I absolutely love, Madison. She is my life. On my days off, I try to spend as much time with her as I can. I love hiking and walks in the woods. There's this nature area near my house called Norris Reservation. I go there and walk my dog and meditate. It's got this cool lookout on the North River. It's perfect. I try to go there as much as possible. I try to remember what's important, and what isn't. If you don't dig deep enough to try to find the importance in human emotions and passion, you'll go insane.