Holidays are no laughing matter for the partners of seasonal showoffs 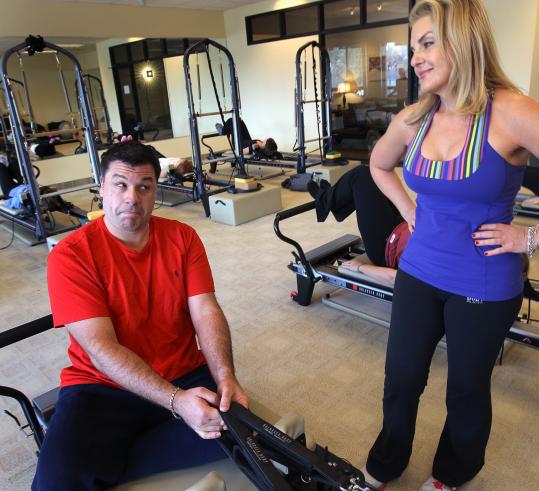 For richer, for poorer. In sickness and in health. That’s the deal. Nowhere in the wedding vows does it say: To embarrass at office holiday parties. To mortify in front of friends at Hanukkah. To dress up as Santa and make inappropriate remarks, humiliating thy beloved.

But that’s what some spouses face during the holidays. For most of us, the season is a pleasant, if exhausting and expensive, round of socializing with friends, colleagues, and family. But for those with socially challenging significant others, the most wonderful time of the year is actually a time to take cover.

Let’s let Flora Montminy, the wife of Scott Montminy, a traffic reporter for NECN and a publicist with InkHouse Media + Marketing, tell her story.

“We have a Christmas Eve party every year, and he dresses up as Santa and I’m his helper,’’ Flora said, starting to sound stressed. “I look forward to the party, but I also dread it because I know he’s going to do something inappropriate.’’ Apparently, Santa likes to pat his helper’s rear and make playfully suggestive remarks. “The adults have quite a laugh at my expense,’’ she said.

This season is already promising to be a memorable one when it comes to spouses and partners gone wild. Just last month, Supreme Court Justice Clarence Thomas’s wife, Virginia Thomas, left a message on Anita Hill’s answering machine asking the Brandeis professor to “consider an apology sometime and some full explanation of why you did what you did with my husband.’’ The call referred to the fact that Hill accused Clarence Thomas of sexual harassment during his Supreme Court confirmation hearings 19 years ago. Then there was Jim Ready, Barney Frank’s partner, who heckled Frank’s Republican opponent, Sean Bielat, after a debate. The odd encounter was caught on video and viewed thousands of times online.

Even old embarrassments resonate. In the newly published “Fragments: Poems, Intimate Notes, Letters,’’ a collection of writings by Marilyn Monroe, the troubled actress wrote about coming upon a diary entry of Arthur Miller’s and learning that her husband was not only “disappointed’’ in her but embarrassed by her in front of his friends.

This month, George W. Bush revealed that he’d embarrassed his wife, Laura, before he quit drinking, at age 40. In his memoir, “Decision Points,’’ the former president wrote about drunkenly asking an older guest at a dinner party about “sex after 50.’’ The room went silent, Bush reported, and his wife and mother gave him “serious daggers.’’

Booze fuels lots of humiliating behavior, therapists say, but much is also done stone-cold sober. Cringe-inducing spousal acts range from excessive flirting to off-color remarks to disparaging the mother-in-law’s gravy. Even being too nice can be a problem.

“She speaks [to others] in this endearing way that embarrasses me,’’ Rob Harris, a local fund-raiser, said as he and his wife, Eve, mingled after a recent New Center for Arts & Culture event at the Arsenal Center for the Arts in Watertown.

“She’ll say to a stranger, ‘You look beautiful today.’ She believes each of us is a beautiful human being inside and out. She wants everyone to smile and be happy,’’ he added, “but sometimes she does it in an awkward way.’’ He imitated himself cringing during one of her niceness fits, covering his eyes and shrinking his head into his shoulders.

“She’s got an amazingly kind heart,’’ Rob concluded. “That’s the irony of the situation.’’

Harris should count himself lucky: In Braintree, Annie Dimopoulos is steeling herself for upcoming social events, since in the past her husband has taken the opportunity to detail the intimate details of her grooming routine, the price of her face creams, and the size of her shoe wardrobe. “I roll my eyes,’’ she said.

Eye rolling, shushing, under-the-table kicks are common if ineffectual methods to curtail the antics. What else can a spouse do? How about: Pray for a holiday miracle?

“We know from the start no one is going to make a huge change here,’’ said Sharon Gilchrest O’Neill, a therapist and author of “A Short Guide to a Happy Marriage.’’ “This is generally who you married. We can talk about what slight change can happen that can make it better for the marriage.’’

She suggests couples try real-time signals, such as a code word, or a touch to use when the undesirable behavior strikes. “This sounds like it should be easy,’’ she said, “but it’s not.

“A foot-in-mouth spouse gets something from their behavior that they so enjoy that they just cannot help themselves,’’ she explained. “For example: being the center of attention at a party. I find that it is not until there is a serious discussion about the behavior (with a professional) along with understanding and empathy for one’s spouse, that there is realistic hope for change.’’

But a larger question needs to be asked, said Anthony Centore, director of Thrive Boston Counseling and Psychotherapy. He looked at the situation from the perspective of the accused: “Did you marry me as an art project?’’

“When you get married,’’ he explained, “you don’t give up the right to behave as you want to behave.’’

That’s something that Zayna Gold, founder and co-owner, with her husband, of Boston Body Pilates and a woman who values decorum, has come to understand. She is married to a man who enjoys stand-up comedy as a hobby. Clark Elefteriadis enjoys going into different characters, often at parties, she said, adding that as his wife she feels responsible for his behavior.

“He’ll do this one that’s like Robert De Niro with an Indian accent,’’ she said. “It is so bizarre.’’ She paused. “I’ve learned to breathe through it.’’

As holiday events pick up, and sensitive spouses prepare to grapple with their partners’ socially challenging behavior, here’s a frightening insight from A.J. Jacobs, a writer who says he makes his living embarrassing his wife, Julie.

Jacobs is the author of “The Know-It-All,’’ “The Year of Living Biblically,’’ and “My Life as an Experiment.’’ In a phone interview, he described running into a friend of his wife’s while he was practicing “radical honesty’’ for an Esquire magazine story. When the other couple suggested a get together, Jacobs was frank. “You seem like nice people,’’ he said, “but honestly I don’t want to see you again.’’

“I know they were offended, and my wife wanted to strangle me,’’ he said. But there was an upside. “One advantage is that we have not seen them again. If you plan it properly you can reap the benefits.’’

Has your spouse or significant other ever embarrassed you?