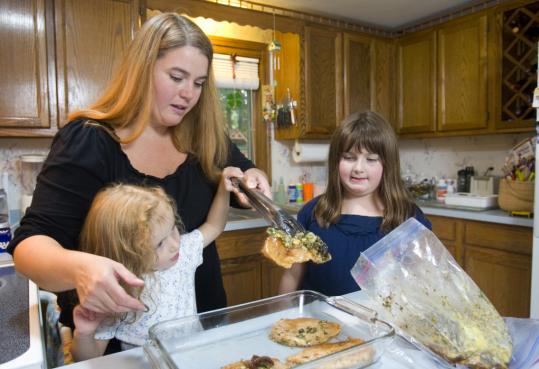 For years, Rachael Scanlon found the glut of fast food restaurants in Framingham almost too convenient. Pizza, hearty subs, and all kinds of Chinese take-out appeared regularly on the family dinner table when she lacked the time or inspiration to cook.

But the calories, cost, and monotony of these dinners drove her to reconsider this lifestyle. Even with “value meals,’’ as many restaurants call them, eating out regularly can add up quickly, from $20 to $30 for a family of four. And in the current economy, recent surveys show that Americans are slashing their food budgets primarily by cutting back on foods they don’t cook themselves. “We were definitely spending too much and it wasn’t always the healthiest foods either,’’ Scanlon says. “Now, maybe once a month we’ll get a pizza, but that’s about it.’’

This mother of two still isn’t cooking from scratch. Scanlon’s solution to the nightly dinner dilemma turned out to be just down the street at Dream Dinners, part of a national franchise of stores offering meals that can be made from pre-assembled ingredients. Decide what you’re making, collect what you need, and exit with healthy, hassle-free dinners. Scanlon’s freezer might hold salmon and crab pinwheels, creamy chicken chipotle ravioli, or a number of appealing entrees.

Neighborhood supermarkets are vying for these customers by offering foods that are partially prepared - already cut up or marinated or mashed - so you can go home and do some quick assembly. In fact, food industry watchers consider supermarkets to be the stiffest competition facing fast-food restaurants. More and more aisle space is devoted to prepared and semi-prepared foods to make meal planning and cooking simpler. Bags of washed and torn lettuces, shredded cabbage, fruit chunks, celery sticks, rotisserie chickens, mashed potatoes, marinated meats, ready-to-grill chicken or vegetables threaded on skewers, and foil-wrapped garlic bread proliferate. Supermarket salad bars have expanded to include items that can be used as side dishes, such as marinated chickpeas or Italian vegetable medleys. “Hot bars’’ with everything from chicken wings to cooked grains speed up dinner prep and clean-up time.

Personal chef Helene Spoto of Andover, who confesses she once had her telephone speed dial set to the local pizzeria and Chinese restaurant, teaches others to “shop on the perimeter’’ of the supermarket, focusing on the produce, meat, and bread both to save money and improve the nutritional value of their meals. “People think they can’t cook or don’t have time to cook,’’ she says. “But in this economic time, people are really, really watching their budgets.’’

With a few staples and time-saving items in the market, says Spoto - shredded cabbage or broccoli, precut potatoes, and marinated chicken breasts among them - “there’s a lot you can do at home.’’ She teaches at events sponsored by corporations for their busy employees. “All of that may cost a little more than buying vegetables by the pound, but it is a lot less than eating out or eating takeout,’’ she adds.

Tom Moynihan has been in the grocery business for 20 years. “It started with the bagged salad instead of iceberg lettuce, then on to the baby carrots, and it’s kept going from there,’’ says Moynihan, manager of Roche Bros. supermarket in West Roxbury. “This is what people want.’’

Those bagged lettuces are “a lifesaver’’ to Carolyn DiPesa. The Scituate resident and her four daughters, including 16-year-old twins, “live on salad, chicken, and pasta. Often, it’s the spring mix lettuce, plus whatever is in the refrigerator,’’ she says.

Wendy Simmons of Quincy also appreciates the convenience of these items. “We’re a house divided,’’ she says, which amuses her. She and one daughter prefer healthy, home-cooked foods while her partner and younger daughter prefer “the junk food’’ that takes as little time to prepare as possible. “I’m a pretty good cook and I used to make everything from scratch,’’ she says. But when she started her own consulting business, “there was probably a lot of takeout food for a couple of years.’’

Now Simmons finds ways to cook more on weekends and shop monthly for items that will keep well in the freezer, such as frozen fish steaks, roasted corn, and even cubes of chopped garlic from Trader Joe’s. Sometimes the system breaks down. “There are definitely days when it’s, tonight, I just have to get this done,’’ she says, “and I’ll grab the already-cut-up onions at the store.’’

Scanlon likes knowing that the cost of her assembled meals is fixed. She goes online monthly to www.dreamdinners.com to decide what she’ll make, selecting from more than a dozen new dishes each time. Everything’s ready for her at the store when she arrives, so she quickly puts meals together from ingredients laid out at stations. Vegetables are already washed, peeled, and chopped; the cleanup is done by the store’s staff. Each meal comes with two- or three-step instructions for heating and final touches at home. With an investment of under two hours and close to $300, Scanlon goes home with 72 portions of a main course, which cost around $4 per serving. (Prices vary by entree; meat and fish dishes are more costly than chicken or pasta.)

“This really fits my budget,’’ Scanlon says, “because I know my costs. I definitely don’t spend as much as I did before.’’ She also saves money because there’s no waste. Her cabinets are not filled with $6 spices needed for just one recipe, and the refrigerator doesn’t collect half-used onions, partial containers of cream, or shredded cheese that turns moldy before she gets to use it for another dish.

More importantly, Scanlon says, “I know I’m feeding my family good, healthy, portion-controlled meals. . . . The meals are definitely more creative than what I would do on my own.’’

Her family likes the new system. “My husband is pretty impressed,’’ she says. So is her mother. “I’ll make up some ribs to serve to my mom and Ddad when they visit.’’