They love being grandparents, but call them something else 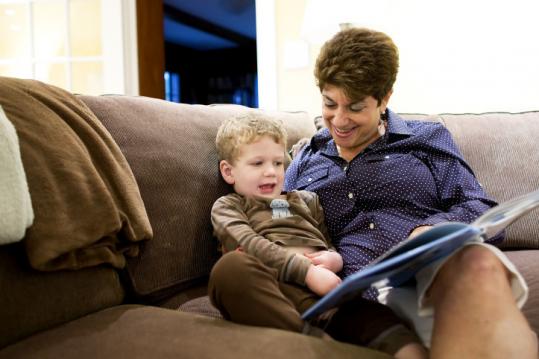 As the youth-obsessed baby boomers advance, albeit reluctantly, into the next phase of their lives, they are embracing grandparenthood with the same gusto they have expressed for everything else, be it exercise or adventure travel. They're loading the grandkids' video games onto their own iPods, listening to their music, and taking them on trips.

But grandparenting comes with a catch: It means you are getting old - or at least older. And that's not sitting well with a generation that grew up on The Who singing, "I hope I die before I get old." Sure, they want to be grandparents. Just don't call them that.

Call them, say, "David" or "Margot." David and Margot de Ferranti's grandson does. "Being on a first-name basis with your grandkids is great," said David, 63, an economist who lives near Washington, D.C., and has a grandson in Boston. "I can delude myself that I'm 20 years younger than I really am, and they can tackle me on their terms, not as an ancient relic."

"I didn't like any of the names I heard people calling grandmothers," Margot, also 63, explained. "I'd rather hear someone calling me 'Margot' than 'Grandma' in public."

"It has such baggage with it," said Lin Wellford, 57, co-author of "The New Grandparents Name Book," a compendium of suggestions inspired by her becoming a grandparent.

The book is a kind of public service for like-minded boomers, offering perky alternative names such as "Bubbles" and "Sharky," "Pebbles" and "Rocky," "GoGo" and "Ammo," and - for wine lovers - "Sonoma" and "Napa."

Names like Grandma and Grandpa "sound fusty and old," contends Wellford, who's "Mimi" to her grandson. "The image you get is of someone in an apron baking cookies, with grey hair. None of my friends have aprons or grey hair that shows. We're all hanging on to our blue jeans and our vision of ourselves as doing this whole aging thing a little bit different. It is like a seismic shift. We are very concerned about our image."

Many grandparents happily stick with tradition, of course. Phyllis Nobel, 66, of Brookline is delighted to have her grandchildren refer to her as "Grandma."

"It's a role in life," Nobel said. "As far as I'm concerned, no matter how old I am or how old I was when they were born, they're my grandchildren and I'm their grandmother. It's a fact. Why mess around with it?"

But plenty of local grandparents are starting to think outside the rocking chair. The Preschool Experience in Newton recently surveyed about 40 children at the school to see what they're calling their grandmothers, and only five responded "Gramma," "Gram," or "Granny." There were some culturally influenced names ("MorMor," which is Swedish; "Bubbe," which is Yiddish). A dozen grandmothers attached their first names, as in "Gramma Norma" or "Grammy Margaret." But many others opted for whimsy: "Momo," "Granmuck," and, curiously, "Ma."

"Ma" would be Arlene Rand, 60, of Newton. "It was easy for my grandchildren to say, and all the grandchildren followed in line," she said.

One observer of the baby boom generation believes the raft of new names reflects the changing face of American grandparenting. Lines of relationships aren't as clear as they used to be, with the prevalence of blended families and multiple marriages.

Consider the situation of Paige and Dave Lewin, for example. Their two boys have a grand total of seven grandparents if you factor in the step-grandparents. There's a "Granmissy" and a "Nanno." There's "Gram-E" (for Elaine) - not to be confused with "Grami-D" (for Donna). There's also "Gran-P" (for Paul), and Pops, who died last year. Only Dave's father went the traditional route - "Zayde" - but he didn't pick the name to be conventional.

"I'm the only Jewish one in the whole group," said Bob Lewin, 63, an Andover lawyer. "It was an easy way to distinguish myself."

These unconventional names also reflect the kind of relationships many grandparents cultivate with their grandkids today. They work hard to stay connected, enabled by technologies that make it easy to stay in touch, by air travel, and by a sense of themselves as young and hip.

"Our more distinctive names reflect the fact that we are more involved and hold a more distinctive place in our grandchildren's lives - or think we do," said Simone Bloom Nathan, 57, co-founder of Still Savvy, a Boston-based website offering essays, advice, and resources to female boomers. The baby boomers were born between 1946 and 1964, making the oldest 63 this year. There are approximately 78 million boomers in the country, according to the Census Bureau.

"I feel like I have a very different relationship with my grandchildren than my parents had with us," Rand said. "I gave them the mandatory kiss. Then they would give me $5. I never had that really warm, loving relationship with them. It was much more formal," said Rand, who likes to take her grandson to museums and the Public Garden. "I feel it's a much younger-feeling generation."

Psychologist Georgia Witkin thinks other demographic factors are coming into play, too. With increased longevity, great-grandparents are occasionally also part of the family picture, and may have already laid claim to the traditional grandparent names. How many Grandmas and Grandpas can one family have?

Witkin is a senior editor at the website Grandparents.com and teaches at Mount Sinai School of Medicine in New York. Her grandson calls her "GG," shorthand for Grandma Georgia. She says it suits her better.

"I get to live in a kid's world again," said Witkin. "I'm learning about Wii. I do Rock Band. He is taking drum lessons and I am, too. How fun is this?"

© Copyright 2009 Globe Newspaper Company.
Photos Famous 'Grandmas'
Your comment is subject to the rules of our Posting Policy
This comment may appear on your public profile. Public Profile FAQ