For some, helicopter parenting delivers benefits 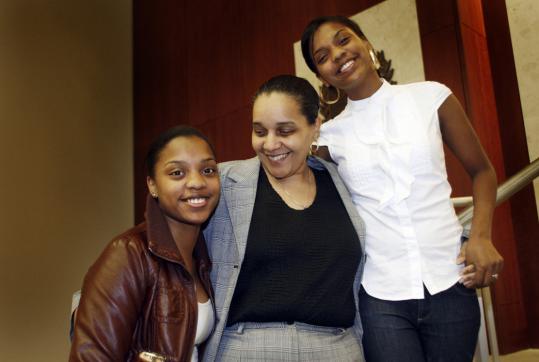 Pattie Knight is in on the details of the lives of twin daughters Symphony and Kymberlee. (Globe Staff Photo / Barry Chin)
By Don Aucoin Globe Staff / March 3, 2009
Text size – +

They are two words guaranteed to evoke a sneer among right-thinking people everywhere: helicopter parents.

According to the image cemented in the public mind, helicopter parents hover over their children (hence the name). All through high school and even after the "kids" have turned 18, 19, 20, and beyond, helicopter parents try to micromanage their lives. Eyebrow-raising stories abound of the mother who accompanies her 24-year-old son to a job fair or the father who writes a college essay for his 19-year-old daughter.

But wait. Beyond such undeniable excesses, a quiet reappraisal of helicopter parents is underway. Some researchers have begun to argue that late adolescence and young adulthood are such minefields today - emotional, social, sexual, logistical, psychological - that there are valid reasons for parents to remain deeply involved in their children's lives even after the kids are, technically speaking, adults.

Moreover, they say, with the economy in a deep swoon, helicopter parents may have a vital role to play as career counselors or even as providers of financial aid to their offspring.

"There is this stereotypical, oversensationalized, negative portrait, where they use 'over-parenting' and 'helicopter parenting' synonymously," says Barbara Dafoe Whitehead, a social historian and author who studies family issues.

"Over-parenting is not letting your kids take the consequences of their actions, swooping down to rescue them, and the result would be a spoiled brat. But helicopter parenting is entirely different, and I think it is a positive style of child-rearing."

Pattie Knight concurs. Even though Knight's twin daughters, Symphony and Kymberlee, are 19 and attending college, Knight remains deeply involved in their day-to-day lives.

She goes shopping with them. She gives them advice about their relationships. She weighs in when they are worried about an upcoming test or wondering which class to take. She helps decorate their dorm rooms. One night a week, when Symphony gets off work from her part-time job, Knight drives from her Newton home to downtown Boston, picks her up, and transports her back to Pine Manor College.

Some of Knight's friends roll their eyes at how much she does for her daughters, and she acknowledges it can be excessive at times.

For example, by her count she and Symphony spoke on the phone 144 times in January, though she notes her daughter did most of the calling. "Even their boyfriends call me, Lord have mercy," Knight says with a laugh.

But the bottom line to Knight is that her style is helping her to forge a close and lasting bond with her daughters. "The thing that I like about our relationship is that whenever they're nervous or unsure about a decision they're about to make, that's when they need me," she says.

That reflects what Stephanie Coontz, director of research at the Council on Contemporary Families, sees as an unacknowledged dividend to helicopter parenting that is becoming more apparent: namely, the enduring friendship often forged between the generations, in contrast to the "generation gap" of old.

"Obviously, there are horrible extremes that helicopter parents can go to, where they don't allow their children to succeed or fail on their own," Coontz says. "But in the majority of cases, this increased closeness between parents and kids is found among healthy students, not unhealthy ones."

That was what Jillian Kinzie found - to her astonishment - when she helped conduct a national survey in 2007 at 750 colleges and universities.

When Kinzie, the associate director of Indiana University's Center for Postsecondary Research, first saw the results of a question about helicopter parenting on the survey, her immediate reaction was: "This can't be right. We have to go back and look at this again."

The survey found that college students whose parents fit the survey's definition of helicopter parents - they had met frequently with campus officials to discuss issues involving their children - were more engaged in learning and reported greater satisfaction with their colleges, even though they had slightly lower grades than other students.

"They tended to have more interactions with the faculty, they tended to be involved in active learning, collaborative learning, more often than their peers," Kinzie says. "I have to admit I was surprised. I had the same negative ideas about helicopter parenting. But perhaps these are students who needed a little support to get over a hurdle, and their parents intervened, and perhaps helped those students stay in college.

"Perhaps I'm less concerned about these helicopter parents than I used to be."

Still, there is far from a consensus that helicopter parenting is a plus, especially when it involves older children. Whitehead defines helicopter parenting as a "high level of oversight and supervision, keeping tabs on the kids but not interfering in every activity or decision," and she defines over-parenting as "intrusive involvement, never allowing the kids the freedom to make a decision and live with its consequences."

Inevitably, that means the line between helicopter parenting and over-parenting is a porous one, often crossed.

Susan Newman, the author of "Nobody's Baby Now: Reinventing Your Adult Relationship With Your Mother and Father," maintains that helicopter parents "do their children an extreme disservice."

"When parents are making decisions for their children all the time and protecting them, when they get out on their own they don't know a thing about disappointment," Newman says.

"I've seen a lot of these children who are parented in the helicopter manner who can't make a decision. They are calling home constantly: 'I don't get along with my roommate, what should I do? My roommate ate my food, what should I do'?"

In one case, Newman says, the college-age daughter of a helicopter parent she knows called home to ask her mother whether she should have sex with a particular young man.

Such extremes are easy to find and hard to defend. But changing economic circumstances - namely, the recession - may give helicopter parenting more legitimacy.

Financial independence will become even harder for young adults, especially since so many of them are leaving college burdened by tens of thousands of dollars in debt. So they may increasingly rely on their parents for monetary support or a temporary place to live, or both.

"Younger generations have always been poor, but rarely have they been so much in debt at 21 as this generation," observes Whitehead.

Sara Christie of Swampscott does not necessarily embrace the term "helicopter parent," and says she tries to give her 16-year-old son Steve space, privacy, and room to grow.

But she makes no apologies for her close and vigilant relationship with him. They are "friends" on Facebook; she still makes sure that he wears a helmet while bicycling and skateboarding; and if she thinks it necessary she will text him in school to find out "what class he's in, how's it going, does he need a ride later."

And when Steve goes to college in two years? "I want to be very involved," Christie answers, then pauses before acknowledging: "I just learned something, answering that question."

"I feel confident that I can and will be involved with my son on a daily basis, even if he goes to college far away," Christie says. "That means a lot to me."