Local millennials say between the high cost of living and student loan debt they are barely scraping by. Why that’s bad for all of us. 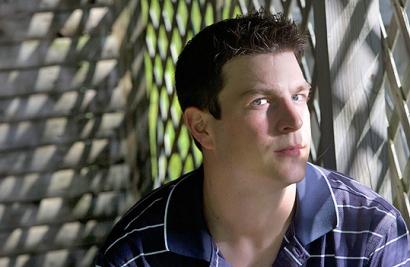 Daniel St. Pierre, 26, a 2009 college graduate and now a sports blogger, outside his Amesbury house, which he and his girlfriend, an accountant, live frugally to pay for. (LAURIE SWOPE FOR THE BOSTON GLOBE)
By Joseph P. Kahn Globe Staff / May 29, 2012
Text size – +

What’s in your wallet? If you belong to the millennial generation, born between 1980 and 1994, the most likely answer is: not nearly enough.

Daniel St. Pierre, 26, knows the feeling. A 2009 graduate of Maine’s St. Joseph’s College, the Amesbury resident lives with his girlfriend in a house they bought on short sale, for around $300,000. She works as a bank accountant. He, after a brief stint in the mortgage business, blogs for Boston Sports Life, a website covering local pro and college teams.

Spare cash is scarce, admits St. Pierre, who drives a 2001 Honda Civic with 191,000 miles on it, carries $65,000 in college loan debt, and has cut back on weekend trips to Maine because gas has gotten so expensive. The couple no longer dines out or goes to the movies much. For a low-cost leisure outing, they might bike to Newburyport. Or they simply stay home.

“I’m not making less than what my friends who are waitering are making,” St. Pierre says. “But we watch what we spend pretty carefully.”

Notwithstanding their collective $200 billion in spending power, and an awesome ability to drive cultural and fashion trends, millennials are not feeling flush these days. Those not drowning financially are often treading water at best, according to surveys like the one released last month by WSL/Strategic Retail, a consulting firm that tracks shopping and retail trends.

Millennials now represent “the highest percentage of Americans lacking enough money to meet their basic needs,” outdistancing Gen X-ers and baby boomers in that dubious regard, according to the survey.

Burdened by $1 trillion in college debt, millennials seek the lowest price on most of their purchased items (80 percent say), shop for lower-priced brands whenever possible (60 percent), and do much of their bargain hunting online (57 percent), the WSL survey found.

Call them Generation Groupon. And with thousands more collecting their college diplomas this spring, ever more of them are sailing into young adulthood, ready or not.

Facing them is “a perfect storm of a weak job market and the fact that those who do have jobs have seen minimal pay increases,” says WSL president Candace Corlett. Unlike previous generations, she adds, young adults are starting out their professional lives by piecing together part-time and temp jobs, or freelancing for low pay. Full-time jobs with benefits? Not many.

Meanwhile, buried under a mountain of college debt, they watch the cost of housing, food, and other basics rise, squeezing them at both ends.

“Millennials continue to set trends, because they embrace what’s new and fringe-y,” Corlett says. “But they no longer have the money to embrace the fringe unless it’s affordable.”

Chris Christopher, an economist with IHS Global Insight in Lexington, has studied the impact college debt is having on millennials, a generation going to college in record numbers, yet also delaying marriage and home-buying more than previous generations did.

“There’s a good chunk of young people who can’t make things work out, who are consuming things a little differently from a generation ago,” says Christopher. While under-35s do spend heavily in some areas, such as on electronic devices, spending in other significant consumer areas, such as durable goods and clothing, has been in decline, reflecting a new economic reality.

In places that have high costs of living, millennials have it especially tough.

“In a city like Boston, these young people get hit pretty hard, too,” Christopher says, facing as they do high rents and paying off the relatively high cost of college tuitions.

According to William Rennie, vice president of the Massachusetts Retailers Association, the decline in millennial spending power has not yet become a topic among his membership. But given its historic importance in setting trends, “that age group in particular, because of its heavy presence at colleges and universities, is a key segment for local retailers to respond to,” says Rennie, whose organization represents over 3,400 companies with annual sales topping $112 billion.

A 2010 Pew Research Center study, focused on 50 million Americans between the ages of 18 and 29, bolsters the picture of a young-adult generation forced to make tough financial choices.

Sixty percent said they do not earn enough to make ends meet. Thirty-six percent said they rely on their families for financial support. And, compared with 25 years ago, households headed by under-35s have 68 percent less wealth than their parents’ generation had, Pew’s research also showed. Downward mobility is the new norm, or so it seems.

Like many, Cailee Mellen keeps a close eye on her cash flow. Mellen, 22, graduated from Boston University last year with a degree in archeology and art history. She lives in an Allston apartment she shares with a roommate and has a full-time job with the Boston Children’s Museum, working in visitors’ service. While not in dire financial straits, Mellen spends roughly half her income on rent and utilities; another $200 monthly goes to pay off college loans, a debt she splits with her parents. That leaves little for spending on such things as clothes and entertainment.

“Other than the essentials,” Mellen says, “I don’t have much leeway. My friends are very money-conscious, too. They’re very much aware of what you need and what you don’t need.”

Kraig Mathias, founder of the Minnesota-based blogsite Young Cheap Living, constantly hears from people like himself — he is 28 — worrying about their debt load and holding down expenses, even if it means small steps like opting for a Netflix subscription over more expensive cable TV fees.

“I was $25,000 in debt and got myself out,” says Mathias, who is an Internet marketer in the Twin Cities area. “It changed my life. I think people are waking up. They’re struggling now and looking to get out of that mess, in order to do what they really want to do in life.”

For younger millenials (those graduating high school this spring), what they want to do remains to be seen, but consuming — for a generation shaped by social media and environmental concerns — may not be high on the list.

“We have a whole generation now that’s not so into conspicuous consumption,” says retail consultant Rick Segel, author of “The Retail Business Kit for Dummies.” “This could be a generation that earns less than previous generations — and doesn’t care.” The bottom line, he adds, is “fewer shoppers are coming through the front doors, period.”

For Leah O’Brien, 25, a marketing manager at Boston magazine, having to defer future plans such as saving to buy a house or putting more into a retirement fund hurts the most. O’Brien earned a master’s degree in integrated marketing from Emerson College last year and lives in a Beacon Hill apartment, shared with her boyfriend.

She spends about 75 percent of her income on rent and college loan payments of nearly $1,000 a month — a percentage Christopher estimates as being “way above what would be average 10 years ago.” Because her graduate degree has made her more marketable, O’Brien says she does not regret going into debt for it.

However, she does watch her spending religiously, bypassing Starbucks for her daily cup of coffee and avoiding a neighborhood Whole Foods store when buying groceries. Both the big and little expenditures add up, she says.

“I’d love a new car, or to get my hair and nails done more often, but I have to be really careful,” says O’Brien. “Everyone I know is on the same page, though. No one’s making tons of money. They’re making enough, maybe, but just enough. Our lives are being delayed compared to our parents’ generation.”

Ashley Driscoll, 22, graduated from Boston College last year. She now works part time in BC’s alumni office, staying in touch with many recent grads. From many, she has been hearing the same refrain: Entry-level job. Barely scraping by. Student loans to pay. Spending on essentials only.

Driscoll has noticed a significant behavioral change among her fellow graduates. No longer, she says, do her friends pretend they have the resources to do whatever they want.

“They might want to go out on weekends, or buy a gift for somebody, when they really can’t afford to,” says Driscoll. “It’s become more socially acceptable to say, ‘Hey, sorry. I don’t have the money.’ ”