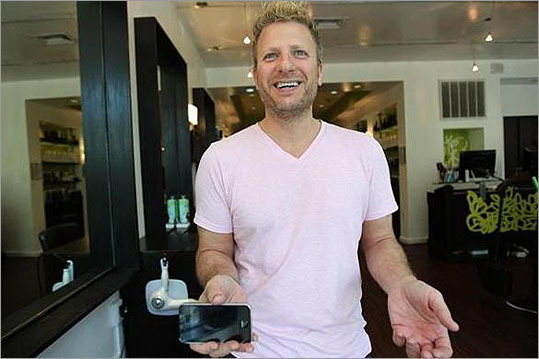 (Suzanne Kreiter/Globe Staff) Alex Iacobacci, owner of the Avanti salon on Newbury Street, was one of the millions of people who lost a smartphone last year. “My trip is ruined,” he said after realizing he had lost his iPhone on the Greek island of Santorini.
By Beth Teitell Globe Staff / May 22, 2012
Text size – +

More than 4 million babies are born every year in the United States. About 2.5 million people die. And in a 2011 study of its 15 million smartphone owners, security firm Lookout determined that 9 million phones went missing in that group alone. That’s one phone lost every 3.5 seconds.

Last summer, on the beautiful Greek island of Santorini, Alex Iacobacci was one of the unlucky ones. He and his partner had enjoyed a lovely evening of shopping and dinner, but when they returned to their hotel, Iacobacci, owner of the Avanti salon on Newbury Street, realized his iPhone was gone.

His frantic TSA-style self pat down will be familiar to pretty much everyone, as will the way he ran the movie of his nightbackward, desperately retracing his steps, until there were no more places to look.

“My trip is ruined,” he said. His boyfriend offered his phone as consolation. “What good is it?” Iacobacci thought. “The only person whose number I know is my father’s.”

More than 200 million Americans own mobile phones, nearly half of them smartphones, according to the Pew Research Center. That’s up from 35 percent just a year ago, and as a growing number of us move our lives onto these powerful hand-held devices, a new anxiety has been identified: nomophobia.

It’s an abbreviation for “no mobile phone phobia,” a condition identified by the UK Post Office in a 2008 survey that found that nearly 85 percent of mobile phone users get anxious when they run out of battery, have no network coverage, or — yikes — lose their phone altogether.

“On some level, if your life is part and parcel of your phone, you should panic” if you lose it, said Rosen, the author of “iDisorder: Understanding Our Obsession With Technology and Overcoming Its Hold on Us.” “Never before have we had the ability to carry something so valuable in our pocket or purse.”

Studies have shown, he said, that people who check their phones constantly do so not because they gain pleasure from the activity, but rather because they suffer from an obsession or a compulsion. “Checking is the only way to reduce the anxiety that you are missing something,” he said.

But some people have little sympathy. Chris Delaney, a self-employed South Boston resident, is one of them. “People say, ‘Oh my God, I lost my life.’ But if your life is your phone, you deserve to lose it,” Delaney sniffed.

Perhaps, but one person’s loss is another’s gain. An entire industry has developed to help people locate lost phones or deal with thefts. The list of find-my-phone apps put out by Washington, D.C.-based CTIA-the Wireless Association, an organization that advocates on behalf of the communications industry, currently includes more than 60 options.

Services range from remote locking so that no one (besides a tech-savvy thief, perhaps) can use it; data-wiping; and alarms, which help you find a phone that’s been inadvertently buried under, say, a pile of snow.

“We had some adult beverages and then went out to the nearby bar to continue the party,” a customer wrote in a letter of appreciation to San Francisco-based Lookout. “Along the way had a snowball fight . . . [W]hen I awoke the next morning, my phone was nowhere to be found. . . . I remembered that I had recently installed your app. . . . [W]e went trudging out into the snow, directly to where the app told us the phone was. We activated the scream feature, and after some intense listening, we heard the faint but unmistakable sound of a phone buried in the snow.”

Lots of people, of course, have phone insurance and make sure their information is backed up. But not everyone thinks ahead. And as many people know, the distraught (former) owner is not the only one to suffer when her phone disappears. There is collateral damage: romantic partners, children, business associates, service personnel. Let’s let Jason Babb, general manager of Grill 23 & Bar, take it from here.

“I had an instance when a guest was adamant that he left his smartphone on the table,” Babb wrote in an e-mail. “He called the next day — we looked through all last night’s linen . . . checked everywhere to no avail. I told the gentleman that. He was insistent that one of my staff stole it. I was equally confident that was not the case. I suggested perhaps he could have just lost it. . . . He was not pleased and actually hung up on me. An hour later the gentleman called back to apologize: It was in his car.”

Rude? Yes, but let’s remember what’s at stake. There’s the cost of buying a new phone, which can run into hundreds of dollars, the loss of all contact with everyone you know, the fear of compromised banking and other personal information, including photos and texts.

It’s a scarring experience that can prompt extreme behavior. After Dan Bradley lost his Galaxy II following a recent Sox game, the Gold’s Gym-Fenway worker decided he didn’t want to get burned again, and started using an old flip phone.

He drags himself to a laptop when he needs to look up something, and has been getting by, he said, but even so, there is shame. “People look at you,” he said, cupping the phone in his hand to hide it from view. He looked at it with some disgust. “I’ll probably get a new smartphone in a few months.”

And so the cycle will begin again.