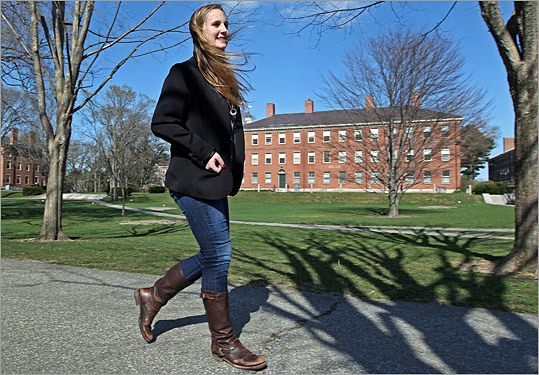 Madeleine Lippey is in many ways a typical teenage girl: She loves Taylor Swift, watches chick flicks with her friends, worries about exams, and has started thinking about college.

In other ways she’s not at all typical. She has grown up in the rarefied air of Greenwich, Conn., with international travel and private schools. But the passion of her life — what makes her blue eyes light up and her words tumble over each other — lies elsewhere, in the townships of South Africa, the slums of India, and the lives of teens in the Middle East.

To bring these voices together, Lippey, who’s just 15, has founded a nonprofit, online literary magazine, The Do Write Campaign. So far, it has drawn more than 1,000 submissions of writing, photography, and artwork from kids in the US, Asia, Africa, and Europe.

The 10th grader is sitting in her tiny dorm room at Phillips Academy, the Andover prep school whose alumni include Oliver Wendell Holmes and both Bush presidents. On her “wall of inspiration,” as she calls it, is a collage of family photos and favorite sayings, from Audrey Hepburn to the Buddha. Her favorite is from Confucius: “Wherever you go, go with all your heart.”

It is advice Lippey tries to live by. Born in Hong Kong to investment bankers parents (he worked for Goldman Sachs, she for J.P. Morgan; they’ve both since left banking), Lippey has traveled widely. The summer of 2010 found her in Dharamsala, India, working in a school where dirt-caked children sat on rags on the floor. It was there that she realized everyone can touch lives far different from their own.

Lippey made a documentary and wrote a column on her experiences for the local newspaper, which she ended by challenging readers to look deeply at themselves and question the materialism that suffuses many American lives.

Brian Lippey says that from an early age, his daughter displayed a social conscience. “It was very clear to us that she had an innate ability to connect with people from entirely different circumstances than her own. It seems like her calling,” he says. He accompanied his daughter to India, and to South Africa last summer.

Last July, Lippey went to work at the Ubuntu Education Fund, a nonprofit that provides medical and educational support for needy young people in the townships of Port Elizabeth, South Africa. Even after India, Lippey was stunned by the poverty she encountered.

“There were miles and miles of one-room huts,” she says. Some of the teens she worked with were orphaned, some abused, some HIV-positive. One 18-year-old was raising three younger siblings by herself in a leaky one-room shack.

Lippey and her new friends talked about big issues such as feminism and human rights. But they also talked about music and what they wanted to do with their lives.

“The Ubuntu kids are inspired: They have dreams and plans, and brush away any notion that they might not come true,” says Lippey. “Their way of thinking challenged mine.”

It was there, that she decided her future. “What I want to do with the rest of my life is meet people with lives different from my own, and from that build a community,” she says. “Because our lives are so different, our words can bring us closer together.”

When she returned from South Africa, she spent two weeks as one of 150 high school students admitted to the Yale Ivy Scholars Program on Global Leadership. After that, she established The Do Write Campaign. (Her 13-year-old brother built the website; she also has another brother who is 5.)

“Writing shows people that they have a voice, and that is empowering,” says Lippey, who calls writing her other passion.

Most of the entries are deeply personal, some are heartbreaking. A Cambodian boy writes of losing an arm and leg, as well as his parents, to a land mine. A boy from Washington writes of his cancer; his first two words are, “I’m dying.”

The website (www.dowritecampaign.com) isn’t just a place to display one’s work, it also acts as a support system for its contributors, through comments. One girl from South Africa wrote a lyrical poem about her loneliness and depression. “Most of my days are like heavy rains,” she began. A Pakistani boy commented: “Nice one! Keep on writing and you will get something truly amazing in the end.”

Jacob Lief, a New Yorker who founded Ubuntu 13 years ago, lauds The Do Write Campaign. “The word ‘ubuntu’ means ‘I am because you are,’ and I think Madeleine really embodies that spirit as a young activist, to be a role model for children around the world,” he says. “So many of our children see horrible things. This is allowing them to find a voice, to become part of a larger global community, which I think is essential.”

Last fall, Lippey was asked to speak at the Women: Inspiration & Enterprise Conference in New York. “Hugh Jackman was there, Jill Biden, Donna Karan,” says Lippey, grinning. “Those are tough acts to follow.”

Lippey knows she has one foot in a world of privilege, the other in a world of poverty. She calls her privilege “an accident of birth. The only thing I can do is to never, ever take anything for granted, and to give back as much as the world has given to me.”

In June, she will run a four-day Do Write Conference in Port Elizabeth, where she will take a group of girls from the US to meet with the girls at Ubuntu. She is lining up speakers — many on Skype — to address such issues as domestic violence, rape, HIV/AIDS, and female empowerment. “We’ll also talk about our dreams,” she says.

She has raised $1,500 so far by speaking in Greenwich and at Andover, about Ubuntu and the conference to cover costs for the girls who can’t afford the trip. She hopes to make the conference an annual event and include women from Iran, Iraq, Thailand, China and elsewhere. This summer, she’ll intern at the Yale Center for the study of Globalization. Next, she wants to organize an entrepreneurial camp for Ubuntu preteens.

OK, so does Lippey have any faults? She blushes and ticks off three immediately: “I’m a huge procrastinator, I like junk food a little too much, and I’m a huge klutz.” Doubtless, just like teenagers all over the world.