Scan on a mission 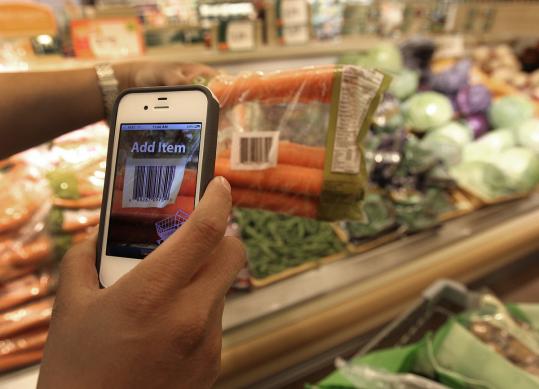 SCAN IT! Mobile enables customers to scan and bag their groceries as they shop. The app is designed to work on an iPhone or Android. (Photos by David L. Ryan/Globe Staff)
By Jane Dornbusch Globe Correspondent / November 9, 2011

BRAINTREE - Self-checkouts are so yesterday. And with consumers complaining about them and some companies eliminating them, supermarkets are seeking new ways to lure in shoppers who want to get in and out quickly.

Enter SCAN IT! Mobile, Stop & Shop’s new smartphone app, which lets customers shop with barely a stop. SCAN IT! Mobile is the son of SCAN IT!, a hand-held device currently found in 350 of the chain’s outlets. Both iterations of SCAN IT! do pretty much the same thing: enable customers to scan and bag their groceries as they shop. You whip through the checkout by basically waving your phone at the register. It reads, you pay, you go.

The app is designed to work on an iPhone or Android. Download it - it’s linked to your loyalty card - and you’re good to go.

Last week, on a test run through the Braintree store, it seemed to work just as advertised, and if you’re already using your smartphone to, say, compare prices or features as you shop, this will be a natural extension.

Produce has been a stickler in the self-checkout lines because it doesn’t have a barcode and amounts vary. Now, scattered throughout the produce department are Weigh It! stations, where you can plop your item on a scale and type in its name or PLU code (or just press a picture of it, if that’s too taxing); a bar-coded label pops out. The weigh stations are a bit clumsy to use initially but could probably be mastered after a couple shopping trips. Last week, one scale refused to weigh anything, despite repeated prodding. It was unplugged.

Over in deli, there’s another new way to avoid human contact. You can type in your deli order at a kiosk, get a printed-out number, and when you hear it called or see it texted to your phone, you pick up the order from a labeled bin. The day of our visit, the printer was out of paper, but we did get a text.

Both the app and the hand-held scanners keep track of your purchases - and you. The app knows where you are in the store. The result is that coupons tailored to your preferences and location pop up on your device as you shop. This has a creepy Big Brother feeling, but you get to save 35 cents on the jar of mayonnaise on your list.

It seems it would be awfully easy to slip something into your cart and not scan it. Store officials insist it’s not a problem. John Caron, of Modiv Media, the company that developed the SCAN IT! software, notes that the store does random receipt checks of customers. This “intelligent auditing,’’ he says, tends to keep shoppers on the straight and narrow. Besides, he says, “Most people are inherently honest, and the device doesn’t make them dishonest.’’ Stop & Shop’s Suzi Robinson says it “hasn’t been much of a concern.’’

At the front of the store, there’s a checkout dedicated to SCAN IT! users. But it’s currently out of service, so last week, we went through self-checkout. Again, the process is a little clumsy for a first-timer, but it works fairly intuitively.

We didn’t see any shoppers using the SCAN IT!, though Robinson says it’s a popular option. Today’s supermarkets have the challenge to differentiate themselves somehow, since it’s hard to do with the quality or variety of the offerings. After all, everyone sells the same bananas.

But whether you weigh the bananas yourself with your smart phone or at a self-checkout, or let a cashier do it, is now up to you.