The market for sports memorabilia is uncertain, but Mansfield show keeps fans returning every year 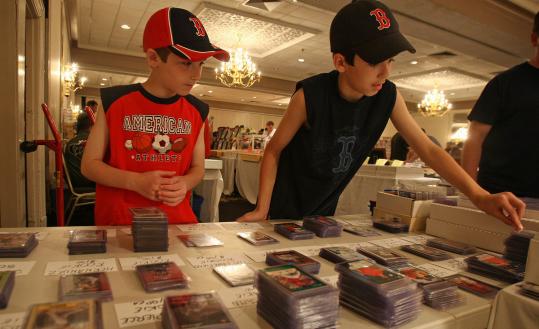 Save your cards, they’ll be worth a fortune someday.

But if you kept those cards, thinking they’re worth thousands of dollars — well, tough luck.

Even so, at Doug Keating’s popular card show on Memorial Day, if there ever were a trading card recession, you wouldn’t know it. The show, held in the ballroom of the Mansfield Holiday Inn, buzzed with energy and remained packed with sports fanatics well into the afternoon.

“Doug’s show is the best card show on the East Coast,’’ said P.J. Burke, 39, a dealer from Hingham. “He’s the strongest promoter in the business, and will always bring in the local athletes as autograph guests. He busts his butt.’’

At the show, dealers from across the region congregated in the motel’s ballroom, where they presented their fare on wooden foldout tables. While nearly every dealer displayed trading cards, other memorabilia — old pennants, team yearbooks, pins, DVDs of homemade highlight reels — lined the tables, transforming the ballroom into a burgeoning sports bazaar, a fan’s dream come true, with one notable exception: Though a throng of adults chatted, traded, and haggled with one another, there were very few children.

Dealers acknowledged the dearth of young collectors and, despite the popularity of Keating’s show, the hit that the sports card industry has taken, with the value of cards from the past 30 years plummeting in value.

They have their theories.

“Kids can’t afford cards now,’’ Burke said. “It’s because of the card companies’ greed; they pushed the kids out of the market, started charging three, four, five dollars a pack.’’

“ wiped out the need for card stores,’’ said Burke. “It saddens me, because I like the idea of kids going to the store to get a card of their hero.’’

Brockton dealer Erik Akesson agreed. “The days of the dollar pack are over,’’ he said, pointing to an oversaturated market as the main culprit for declining values.

At some point, card companies started printing cards like money. Soon, with many sets — like the 1990 Fleer — supply far exceeded demand.

“You got burned’’ with so many cards in circulation, said Whitman dealer Larry Mishou. “It all became worthless.’’

The economy hasn’t helped, he added. “People need their money for gas and food now.’’

Yet through it all, Keating’s card show in Mansfield continues to thrive.

Keating, 38, grew up in Whitman and began collecting baseball cards in the early ’80s. When he was a senior in high school, he put together his first show at a local VFW post; after college, he would run four or five shows a month, delivering pizza to make money on the side.

Twenty years ago, he held his first show at the Mansfield Holiday Inn. “There have been a lot of changes in my life and in the hobby over the past 20 years, but this card show has been the one constant,’’ Keating said.

The autograph guests at his shows are a huge draw for sports fans, allowing many to meet their childhood heroes. Past sports stars have included Bruins legend Milt Schmidt and Hall of Famer Jim Rice; controversial slugger Jose Canseco was scheduled to appear for last month’s show but canceled, citing medical reasons.

His replacement was no slouch: great Tom “Satch’’ Sanders, elected to the Basketball Hall of Fame earlier this year.

At the show, Norwood resident Ed Brook, 55, waited in line to meet Sanders.

“It’s great to see these guys in person,’’ said Brook, who began collecting with his son more than 25 years ago. “It brings back a lot of memories.’’

Wearing a Red Sox dugout jacket, Morgan Dunbar shook Sanders’ hand and shuffled away, clutching a basketball covered in autographs. The 82-year-old traffic cop had driven from New London, Conn., to meet Sanders, and this marked the first time he’d been to one of Keating’s shows.

“On this basketball, I had 19 autographs, all older players, like John Havlicek,’’ he said, pointing to the Celtics legend’s signature, gracefully transcribed in big, looping letters.

To many of the adults who frequent Keating’s show, nostalgia also sells, and the dealers offer plenty of it. Cards from the 1950s and 1960s — the ones so many threw out — have retained their value, and still remain the most sought-after products. A 1958 Topps Ted Williams card — valued at $600 — can be had for $250 at Keating’s show.

“People romanticize about that era,’’ explained Mishou, who’s been dealing in sports memorabilia for 24 years.

Ultimately, if it were simply about turning a profit, the dealers wouldn’t be here.

Sure, there was a time, in the late 1980s, according to Burke, when you could earn a living at it. “Now you’d have better luck buying scratch tickets,’’ he said with a laugh.

Instead, a passion for sports and collecting, which, for many, began in childhood, keeps them coming back. To this day, Akesson said, he still loves “ripping open packs and reading the stats,’’ just as he did as a kid.

And because the love of sports runs deep, passed down from generation to generation, dealers like Akesson are optimistic about the future of collecting.

“There will always be a rebound. It’s sports. Everyone loves sports, and people are always going to want a piece at some point,’’ he said.

Though there were only a few youngsters at the Memorial Day show, Mishou doesn’t view this as the undoing of the industry; rather, he sees it as a demographic shift. Whereas children who are big fans might not buy cards now, they’ll be interested when they’re older — and have a little more money in their pockets.

“People will come back when they’re 30, when they have money and can afford the older stuff.’’

Collecting will always provide a welcome diversion for adults, Mishou said. “We all go through the same cycle: Play, grow up, girls, car, job — and then we want to play again.’’

Nick Lehr can be reached at lehrni@gmail.com.