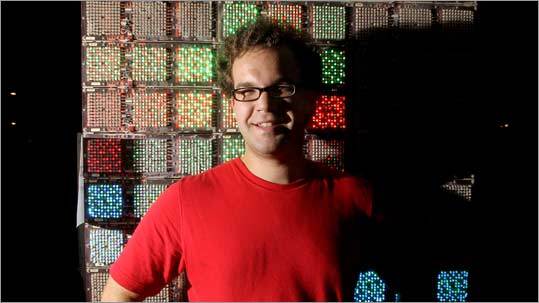 You and your fiancee, Jenn Martinez, opened Artisan’s Asylum earlier this year. Why now? Neither of us had space to work on our projects. Jenn does costume design, I do robotics. Space opened up. We decided to take the leap.

Which classes are most popular? Our TIG Welding class is always really popular. It’s a particular type of welding that’s used for high-performance applications, like bicycles and sports car frames. It’s fairly easy to learn, fairly hard to master, and incredibly useful. Then there’s Building the Asylum, which is basically an introduction to woodworking. In exchange for the training, students work on making workbenches and tables and other infrastructure for the Asylum, so it’s a trade.

What tools should every home improvement DIY-er have? A six-pack of cordless or corded hand tools – a nice power drill, a reciprocating saw, things along those lines – are complete must-haves. Metric and English box wrenches, screwdrivers in various sizes and shapes, hammers – those are the basics.

Who’s taking the classes – mostly novices or more experienced folks? Most of the people interested in taking our classes consider themselves newcomers or beginners – people who never had the opportunity, who didn’t take shop class. We’ve also found that we’re actually pretty gender-balanced. That’s been really encouraging and uplifting for us. We did find early on that our first set of welding classes were all men, so we started a class called Metalworking for Women. It sold out the second we announced it.

What do you hope the Asylum will achieve over the next year? I want us to be participating in the community and really drawing people in and engaging people’s creative sides, showing our local community that there’s more to life than the computer monitor and TV screen. Whatever it is you want to make, whether it’s furniture or robots or costumes, it’s all creative, fun work.