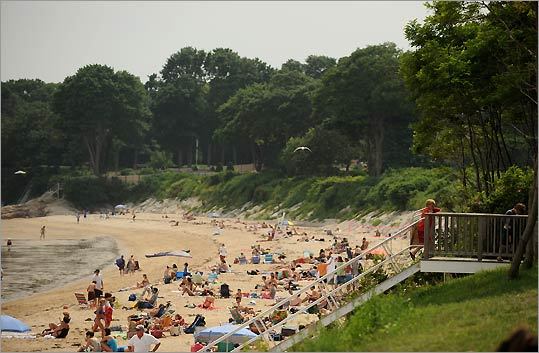 In the battle of the beaches, fans on each side say they know best

First were the Montagues and the Capulets. Then came the Hatfields and McCoys. Here, we have the North Shore and Cape Cod at odds over which has the better beaches. Each camp knows with a moral certainty that its beaches run rings around the other’s. There is no sandy middle ground here.

“The North Shore rules,’’ averred Renee Gosline, a resident of Manchester-by-the-Sea, home to the celebrated Singing Beach. “It beats the Cape.’’

To which Jake MacNaughton, a Chatham native who works as a lifeguard at the town’s sublime Hardings Beach, retorted: “The Cape’s the best. Where exactly is the North Shore?’’

To assess just how committed the fan bases are, we picked two beaches from each side and gathered the points of view. (Was this assignment dreamed up because getting paid to spend time on scenic beaches is great work if you can get it? Now that’s just cynical.)

For the North Shore, we chose Crane Beach and Singing Beach. On the Cape, Hardings Beach and Nauset Beach. Hardings is on Nantucket Sound, Nauset on the brisker Atlantic side.

(Truth in advertising, this reporter spent summers on the Cape growing up, but I’ve also been going to Crane since Harry Truman was president. Color me neutral, sort of.)

Along with the hardcore are apostates like Kristen Mitchner, a North Shore denizen basking recently at Singing Beach who is partial to Cape beaches. “I like the Cape,’’ the Beverly resident said. “I vacationed there as a kid. My favorite beaches are in Dennis and Harwich. You can be in the water all day there. You can’t get in the water here.’’

The North Shore’s Crane Beach, for the record, registered 58 degrees the day we visited it a couple of weeks ago. That same day, the temperature on Hardings was 10 degrees higher.

That’s the point. If you want to stay in the water all day — throwing Frisbees, body surfing, diving off dad’s shoulders — the warm waters of Nantucket Sound at beaches like Hardings trump everything.

But then few come to the North Shore to swim. There’s a perverse pride of some North Shore stalwarts in the shock of its waters. “Puritanism is alive and well here,’’ Adam Bolonsky, an Arlington native, says proudly farther down Singing Beach. “This water addles the brain. There’s a 10 stroke minimum above water and an eight stroke under water to call it swimming.’’

Julie McConchie, head of the North of Boston Convention & Visitors Bureau, does her best with a bad hand on the subject: “You can do the same amount of body surfing, you just wear your wetsuit.’’

Many people consider Crane Beach in Ipswich to be the nonpareil of the North Shore. (Others swear by Good Harbor or Wingaersheek beaches in Gloucester.) Crane is four miles of pristine white sand, which makes it a superb walking beach. It resembles a French seascape as you near the mouth of the Essex River. Its dunes are as lovely as its water is gelid. Most of those who do go in the water stand in it, briefly, up to their knees.

Singing Beach, in contrast, is an unimpressive half-mile of brown, granular sand. What it offers to Bostonians is a day at the beach out of the city without a car. A train from North Station takes visitors to Manchester in under an hour. From there, it’s a half-mile trudge to the beach. You see hordes of folks on the sidewalks in their bathing suits schlepping chairs and tote bags along the road.

Some Crane Beach enthusiasts find the Singing Beach crowd a bit much. Manchester, after all, has been a haute Wasp redoubt since the beginning of time. “It’s pretentious,’’ said one. “Everybody’s too snobby.’’

North Shore and Cape Cod trade volleys over commercialization, traffic, sand, seaweed, dunes, and water. North Shore beach advocates say their water is cleaner, there’s less honky-tonk commercialism than what you find on the Cape — think Hyannis — and no seaweed that can blanket the beaches.

And let’s not forget the sharks — great whites, munching on the seals that reside on Monomoy Island off Chatham. It’s like all you can eat at Denny’s for the whites. As Anne Flannery, who has been coming to Chatham every one of her 71 summers, said, “I don’t like to see them out there.’’

Greenhead flies are an equal opportunity nightmare, so they’re a wash in beach competition. They’re out early this year, already conducting their bombing runs at Crane and Hardings.

Cod people maintain their water is cleaner, the seaweed isn’t that bad, and nothing can touch the vistas of the Cape Cod National Seashore on the Atlantic side of the Cape. Overseen by the National Park Service, a stunning beach runs almost 40 miles from Provincetown to Eastham, Orleans, and a piece of Chatham. It offers dramatic dunes and cold, clear water. There is nothing on the North Shore to match it, but then there’s nothing like it north of North Carolina’s Outer Banks.

“This is the epitome of what a Cape beach should look like,’’ said Nauset lifeguard Sarah Newcomb. Stan Alpert, who has been coming to Nauset from Connecticut since 1987, chimed in, “This is the best beach. It’s the cleanest anywhere, cold but refreshing, with great beauty. There’s nothing like it.’’

The North Shore wins hands down on access. Crane and Singing Beach are perfect day trips from Boston. The Cape is not; it is a destination for weekenders and vacationers. It is a commitment with a big payoff.

The truth is, there’s deep beach loyalty everywhere. Flannery, for one, has no plans to change her Cape commitment. “The North Shore is much more crowded.’’

Asked about the Cape, Beverly native Carter Jackson responded, “I’ve never been there. What’s not to like here?’’

(Essdras M Suarez/ Globe Staff) Alyson Cavalere and Kelli Fletcher, both of Cambridge, spend some time at Crane Beach in Ipswich on the North Shore.