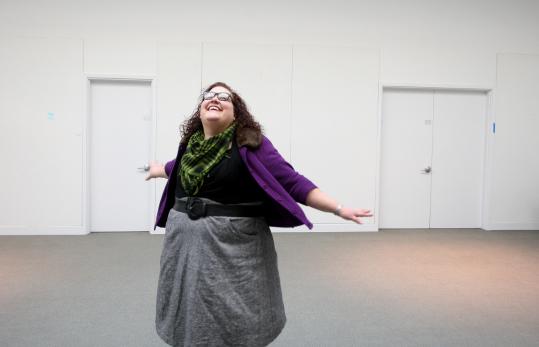 Not “Does this dress make me look fat?’’ fat, which requires the obligatory reply, “Of course not!’’ At 300 pounds, Kinzel is fat in a way that is absolute. It’s who she is. She’s happy to be fat, and she’s happy to use the dreaded word.

“I benefit from owning this word, because if someone wants to use it against me, it takes away its power to hurt me,’’ she says. “If I am walking down the street and someone [calls me a name], I say, ‘Ha ha, you can’t use that against me.’ ’’

Kinzel, 32, of Revere, is the face and voice of Fatshionista, a fat-activist blog (www.fatshionista.com) containing a blend of personal narrative and commentary on social justice issues, popular culture, and fashion advice through her judicious critical lens. The blog, which receives 70,000 hits a month, is her way of controlling her representation as a fat woman in a society where she is often marginalized.

Kinzel is an important presence in the fat blogosphere, where roughly 30 active blogs at any given time range in focus from body politics to fashion. Such blogs provide an antidote to the common caricature of fat people in the media when concern is growing over the country’s obesity epidemic and more than a third of American adults are obese.

But while television shows like “The Biggest Loser’’ garner top ratings and the sizes of celebrity waistlines dominate the tabloid headlines, a burgeoning trend of size-acceptance is emerging. Glamour magazine recently began featuring plus-size models; Marie Claire runs a column from 220-pound stylist Ashley Falcon; and this month, high-fashion V magazine is releasing “The Size Issue,’’ devoted to plus-size models wearing runway styles typically modeled by waifs. The young actress in the title role of one of the year’s Oscar contenders, “Precious: Based on the Novel ‘Push’ by Sapphire,’’ is obese; 2009’s best-selling album came from the portly singer Susan Boyle; and one of the hippest woman in indie rock is Beth Ditto, the proudly heavy woman who fronts the band Gossip.

Kinzel says the cultural trend toward size acceptance can be transforming for some women, who may think, “How empowering is it to see a picture in this fashion magazine, to see a woman who actually looks like me? It’s a radical act to have that experience if you have never seen that before. Just everyday people saying, I don’t want to be part of this compulsory skinniness.’’

BEING HERSELF IN BOSTON
On a Wednesday evening, Kinzel is at the Museum of Fine Arts, checking out the contemporary “Picturing Music’’ exhibit. She’s wearing pink and purple striped knee socks, black Mary Jane clogs, and a black-and-gray striped scarf. Her shoulder-length auburn curls are worn loose, framing a pair of bold Buddy Holly-style glasses.

Kinzel, who works in Graduate Studies admissions at Simmons College, posts an “Outfitblog’’ segment on Fatshionista containing photos of herself accompanied by a breakdown of what she’s wearing and why.

“I tend to prefer to dress in ways that are sort of ostentatious,’’ Kinzel says. “I want people to notice I am walking around, like, you know what? This is who I am, and if you don’t like it, then that’s not my problem.’’

In a video installation at the MFA exhibit, 30 Madonna fans on 30 TV screens jam to “Express Yourself.’’ They’re all writhing and swaying, fists pumping and shoulders shimmying as they sing in a wacky, cacophonous unison. Kinzel bobs her head to the beat as she watches, rapt by the madcap display. “I love seeing people just being themselves, not holding back,’’ she says. “There’s no artifice. I suppose I identify with that in a way.’’

It took Kinzel roughly two decades to reach such a steadfast point of self-acceptance. “If you don’t aspire to look a certain way, people won’t let you forget it,’’ she says of the looks-centered culture of South Florida, where she grew up. Bullied in school because of her weight, Kinzel dieted steadily from the age of 9.

She left Florida to study at Boston University, where she graduated with a film degree, and her thinking soon began to shift.

“My first week in Boston was like this unbelievable revolution,’’ she says. “I felt that people up here were a lot more laid back, were a lot more accepting. . . . I was actually comfortable in my skin for the first time in my life.’’ Around that time, Kinzel discovered two books: “Fat!So?’’ by Marilyn Wann, a central figure in the fat activist movement, and “Fat Girl Dances With Rocks,’’ a coming of age story about a fat 17-year-old by Susan Stinson.

“When I read these two, that made me sort of step back,’’ says Kinzel, who has a master’s degree in family culture and society from Wheelock College and a second master’s in gender and cultural studies from Simmons. “It made me want to step back and want to interrogate culture about bodies and what is acceptable.’’

A BLOG INHERITANCE
In 2004, Amanda Piasecki, 34, of Oakland, Calif., started a LiveJournal community called Fatshionista after growing frustrated with being unable to find clothes that fit. “I had done a lot of fat activism and spur of the moment decided to create a community that surrounded fat fashion,’’ Piasecki says. Almost from the beginning, Kinzel was a vocal part of the online community and was appointed as a moderator. Piasecki eventually lost interest and asked Kinzel to step in, giving her the Fatshionista moniker and domain.

Fatshionista is a unique mix of personal memoir, social commentary, and fashion tips. In addition to her “Outfitblogs,’’ recent posts include a response to the media’s treatment of the movie “Precious,’’ a photo of her newly adopted 26-pound cat, and a piece about being fat in public called “Sometimes, the Elephant in the Room Is Me.’’

Marianne Kirby, 32, of Orlando, Fla., who does her own blogging from TheRotund.com, connected with Kinzel through LiveJournal, and the two have become friends. “There are [fat] fashion blogs that do not handle the politics of being fat,’’ Kirby says. “I think that it is important to talk about the politics of fat fashion, so I have a strong preference for Lesley’s take on it.’’

COUPLES ACCEPTED, TOO
While obesity can bring dire consequences to one’s health, Kinzel maintains that sometimes trying to lose weight can do the same thing. When she was 24, Kinzel had her gall bladder removed because of gallstones. Frightened of the fat that had caused the stones, Kinzel embarked upon the most restrictive diet of her life. In six months she lost 3 pounds. But she discovered that yo-yo dieting can actually cause the kinds of gall bladder problems that led to her surgery.

“To say that it enraged me is a major understatement,’’ she says. “If I hadn’t started dieting at 8 or 9 or gone on as much as I did and been on that roller coaster, I might still have this organ in my body. . . . It really made me think, wow, I am really questioning everything I have always assumed about my body.’’

Kinzel and her husband, Dennis Scimeca, are featured in a offshoot of her blog, an online gallery called Museum of Fat Love that features pictures and stories of fat and happy couples. The gallery, which launched in September, was inspired by the Fox reality show “More to Love,’’ which Kinzel calls ‘The Bachelor’ for fat people.’’

“The contestants would spent 50 percent of the show crying about how ‘no one will ever love me because I am fat. ‘No one will ever accept me.’ It was so, so, depressing,’’ Kinzel says. She countered with Museum of Fat Love, which has been so popular that she has a backlog of nearly 40 couples hoping to get their pictures and stories published alongside the 70 couples already there.

But her online success is not her greatest triumph.

“My greatest success, to be honest with you, is the fact that I am here and I am happy, and I do, truly, accept myself as I am. That I don’t have moments of doubt anymore,’’ Kinzel says. “I even have a hard time even imagining what that was like, because I spent so many years doubting myself. I feel like a different person almost. That really is my proudest accomplishment.’’