Change you can believe in

Children all over the world know what Santa looks like. Right? Not necessarily. 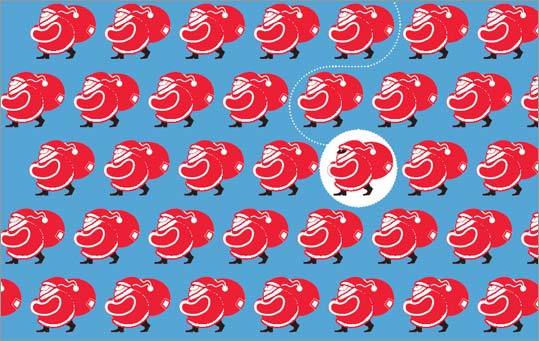 It's possible, even likely, that the Santa Claus found in the vast majority of America's shopping malls and on holiday cards by the sleighload will undergo a subtle makeover in Christmas seasons to come. Until this year, after all, the face of the US presidency was one color only. In the meantime, efforts to diversify Santa's image - return him to his ethnic roots, some might say - have gradually increased over the past decade as the American melting pot keeps expanding.

No one's predicting a wholesale facelift for St. Nick and his surrogates. Yet change, not just flying reindeer, is already in the air, it appears.

"I think you will see more ethnically divergent Santas in the future, in part because of the Obamas," predicts University of Manitoba history professor Gerry Bowler, author of "Santa Claus: A Biography." In minority communities, according to Bowler, an authority on Christmas traditions, two cultural impulses have emerged. One is the desire to assimilate into the mainstream, the other to "have a Santa Claus that looks like us," including Hispanic and Asian-American Santas.

In keeping with that spirit of diversity, several dozen families attended a recent holiday party at the West Medford Community Center, where an African-American Santa fielded toy requests from tiny tots while handing out candy canes. Cosponsored by the New England Alliance of Multiracial Families, the event, the 11th to feature a Santa Claus of color, attracted parents and children for whom encountering a black Santa (with a white Mrs. Claus standing alongside him) was not just a curiosity but a priority.

Deleatra Bolton of Malden, accompanied by her husband and two young children, said it was refreshing to find a "nontraditional" Santa in a state like Massachusetts, where such sightings tend to be rare. In Maryland, the state she'd lived in previously, black Santas are far more commonplace than up North, Bolton said.

"In our house at Christmas, all the angels and Santas are black," Bolton said over the fa-la-la of holiday music emanating from a boombox. "My daughter is 4 and just starting to realize about race." This year, she said, her daughter had wondered aloud why there was a black Santa at home and a white Santa at the mall. "I told her that Santa can change his color depending on whichever house he visits, and that what's important about Santa is what's on the inside, not the outside," Bolton said with a smile.

Snapping pictures nearby was Darlene Davis of Dorchester, whose 3-year-old son Tristian had already spoken to the Big Guy. "To me, it's important for African-American boys especially to see their images reflected in Santa - and in our political leadership too," Davis said. "They can see that Santa Claus comes in all colors, shapes, and sizes, and that this one happens to be a reflection of their own image."

His iconic stature notwithstanding, Santa Claus as we've come to know him - particularly the department store variety - is fundamentally a late-19th-century creation. Based in part on a fourth-century Turkish bishop named Saint Nicholas, Santa "took on all sorts of shapes, including black men, dwarves, giants" a century ago, Bowler notes. Only after being popularized in works like Clement Moore's poem "A Visit From St. Nicholas" (illustrated by political cartoonist Thomas Nast) and in countless ads did he assume the canonical image Santa enjoys today, right down to the cherry-red suit and very white face.

"Over the years there've been attempts to diversify Santa, but none really successful until the 1990s," Bowler notes. "Still, you've had more success with black Santas than with female Santas." One issue for aspiring black mall Santas is the beard, he adds, since full-time Santas typically sport flowing, naturally white whiskers, a feature African-American men have difficulty cultivating.

Down South in cities like Atlanta, however, black Santas are the norm at venues like the Mall at Stonecrest. Marketing manager Donald Bieler hired his first naturally bearded black Santa eight years ago." It's a business we've tried to grow but is still in an evolutionary stage," says Bieler, adding that he was "amazed that Caucasian kids would stand in line to meet an African-American Santa. He's a magical figure, though, and this is a wonderful way to teach children about diversity."

Point taken, but could there really be a Barack Effect on Santa Claus? Culture watchers like Manhattan PR executive Terrie Williams are convinced there will be. "To me, Barack Obama's election was a supernatural phenomenon, one that made people realize everything is possible," says Williams. To anyone who objects that you don't mess with Santa, Williams points out that much of the holiday is man-made anyway. "There comes a time when you want to do it your way," she maintains.

In the four decades he's been staging Boston's "Black Nativity" pageant, Barry Gaither claims he has run across precisely one black Santa, and that was in Atlanta. With Obama's election, though, Gaither expects the influence of black culture will spread outward, even to the North Pole. "The Christmas season is a time to foster good will, secular or religious. Indeed, that's its true meaning."

At the West Medford Community Center, Beau Stubblefield-Tave was happy to have done his part by putting on a red suit and a not-so-convincing beard for a few hours. "My [being] Santa is part of presenting a positive image for all kids, but especially young black boys," he said, noting the image of success projected by leaders like Colin Powell and Obama. "This used to be Ozzie and Harriet's America, but that's no longer the case," said the man they'd all come to see. 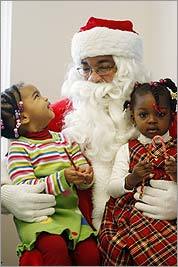