THIS STORY HAS BEEN FORMATTED FOR EASY PRINTING
ROXBURY 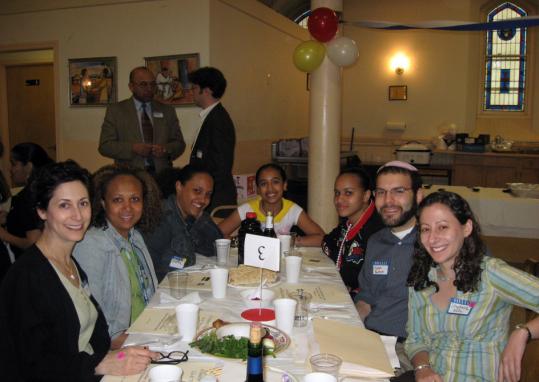 In a church basement adorned with pictures of the Virgin Mary, Jews gathered last week to celebrate Passover. Cape Verdeans munched on matzo with horseradish and sang Hebrew prayers.

The scene in St. Patrick's Church in Roxbury wasn't exactly traditional. But as Isaura Mendes, a leader in the local Cape Verdean community, said: "It's always good for people to get to know one another."

This is what Joel Schwartz had in mind when he organized the first Cape Verdean Seder three years ago. After all, Jews have long used the themes of Passover, commemorating the liberation of the Israelites from Egyptian bondage, to reach out to other communities.

Schwartz, who has worked with Cape Verdeans as program manager with the Greater Boston Interfaith Organization for 16 years, didn't realize then what many Cape Verdeans have quietly known for generations: Many of them have Jewish ancestry. Nor did he know until last week that this year's Seder would draw Jews and Cape Verdeans from as far away as Washington, D.C., seeking to reforge this historic bond.

The Jewish presence on Cape Verde can be traced back to its earliest days, when Portugal discovered and claimed the tiny chain of islands off the west coast of Africa in the mid-1400s. With the start of the Inquisition, many Jews, forced to convert or hide their identity, fled to Cape Verde and other Portuguese colonies in hopes of getting out from under the heel of the religious authorities.

Starting in the mid-1800s, Jews from Morocco began going to the islands. While these newcomers eventually assimilated into the general population, their imprint remains in family names like Cohen, Levy, and Wahnon, a name borne by the country's first elected prime minister. There is also a village called Sinagoga (synagogue) and a few cemeteries with Hebrew inscriptions.

All of this piqued the curiosity of Carol Castiel when she was working in West Africa for a US aid agency in the mid-1990s.

"Over the years, I began noticing these names that were typically Jewish, and these connections somehow came out," said Castiel, a Jewish journalist who traveled from Washington, D.C., to attend last week's Seder.

The discovery sent her on a mission to preserve the islands' Jewish heritage. She recently founded the Cape Verde Jewish Heritage Project, with the aim of raising funds to restore the cemeteries and promote education and tourism centered on the country's Jewish history.

Because the connection is so attenuated by time and intermarriage, it is nearly impossible to estimate the number of Cape Verdeans with Jewish ancestry. But the renewed interest has led some Cape Verdeans to acknowledge and explore what had only been suspicions.

Schwartz said that when he took an informal poll at a Seder planning meeting, one-third of the Cape Verdeans said they thought they had Jewish ancestry, including people he had worked with for years. "I had no idea," he recalled.

Other Cape Verdeans have long been aware of their Jewish background and proudly acknowledge it. "My father told us about the Jews in our family," said Jacinto Benros, who is 75 and lives in Providence. (New England is home to the largest population of Cape Verdean immigrants and descendants in the country, estimated by the US State Department at a few hundred thousand.)

Other Cape Verdeans have taken recognition of their Jewish heritage much further. Gershom Barros, whose father was Cape Verdean, underwent the exhaustive process of converting to Orthodox Judaism. Barros didn't know his father had Jewish roots until after he died.

"My mother told me she used to call my grandmother a crazy lady for lighting candles in the closet," he said, suggesting that she practiced secret Jewish customs passed down for generations, as has been noted among other descendants of Portuguese and Spanish Jews who were forced to hide their identities.

Barros drove up to the Seder from Providence with his friend Pedro BenOliel, who was born in Cape Verde and also identifies himself as Jewish.

All of this has fascinated Marilyn Halter, a Jewish history professor at Boston University who wrote a seminal book on Cape Verdean immigration to the United States, and married a Cape Verdean-American.

Halter discerns another connection between Jews and Cape Verdeans: Both have struggled to define their cultures on their own terms.

"Cape Verdean identity has always been in flux, and has always been subject to hostile and cruel circumstances. Jews have also been persecuted, as a race, religion, and ethnicity," she said. "I set off to learn as much as I could about Cape Verdean culture and in the process, better understood my own Jewishness."