In Baghdad, building order out of chaos 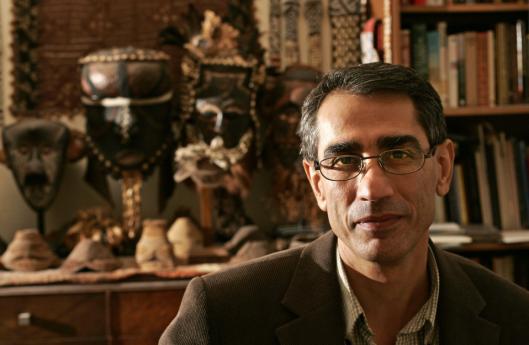 CAMBRIDGE - With his soft voice and scholarly manner, Saad Eskander doesn't seem like a person fresh from the front lines of a war. But as director of the Iraq National Library and Archive in Baghdad, he has carried on his own four-year battle to preserve his country's cultural heritage. While most of his peers fled the country, and five members of his staff were murdered, he has stayed on.

"Every person has a cause to fight for," Eskander said in an interview during a visit to Boston this week. "This was my cause. If every one of us leaves the country, who will win? The forces of darkness, the extremists, the ignorant. It was important to stay and fight, and my sphere was culture."

Since the library was looted and all but destroyed in the aftermath of the March 2003 invasion, Eskander has reopened the main reading room, created a conservation lab and modern computer systems, put much of the catalog online, and opened the library to all students and scholars. He also built a new 300-person staff of men and women spanning ethnic and religious groups and creat ed a democratic structure of internal decision-making. Meanwhile violence reigned outside, which Eskander documented on a widely read online diary.

"It's a huge achievement, given the conditions he has had to operate under," said Andras Riedlmayer, a bibliographer of Islamic collections at Harvard's Fine Arts Library. "No matter what emerges from the chaos which is Iraq at present, if the society is to have hope, it will have to have institutions like the one Eskander heads." Eskander, on a two-week speaking trip to North America, will give a speech, "Rising From the Ashes: The Story of the Iraq National Library and Archive," at 6 p.m. today at the Boston Public Library.

Eskander was born in Baghdad of Kurdish parents. As a teenager he joined a Kurdish nationalist movement in northern Iraq. In 1990, he went to England, studied history, and earned a doctorate in Kurdish-British relations from the London School of Economics. He was working as a researcher in London for the Iraq Cultural Forum when the war began.

"We all dreamed of this," he said in excellent English. "The Iraqis in exile wanted to go back to rebuild the country, so we went as a group - artists, journalists, writers - and our plan was to participate in the transition from dictatorship to democracy. But as the sectarian situation got worse, all my friends decided to go back to London. I was the only one to stay. I had had enough of exile." Committed to a united, nonsectarian Iraq, he severed ties with the Kurdish movement. In December 2003, he was appointed head of the Iraq National Library.

"I knew that the library was attacked," Eskander said, "but when I visited it for the first time, I was astonished by the damage. About 60 percent of the archival collections were lost forever - documents, maps, photographs. We lost 95 percent of the rare books and 25 percent of all the book collections. The building was standing, but there was no ceiling or windows, and thick soot covered everything."

As soon as he took over, Eskander set a goal of reopening the main reading room within six months. "I thought it was extremely important to open it for students and scholars, partly to right the morale of the staff," he said, "to get them to believe in themselves." The goal was achieved, and other programmatic improvements followed.

Besides technical upgrades, Eskander was determined to turn the library into a microcosm of a civil, nonsectarian society as a model for the country. Various departments elected representatives to participate in decision-making. "Our women organized themselves, founded a women's union to define their rights. We not only worked on books and archives," he said, "but on people as well. We tried to make a little Iraq."

Meanwhile, the violence worsened, documented in Eskander's diary, posted on the British Library website (www.bl.uk/iraq diary.html). A representative sample from November 2006: "I received bad news, as soon as I arrived to my office. In my absence [the library] was bombed twice and snipers' bullets broke several windows. . . . I spent the rest of the week trying to advise a number of my employees what to do, as they got death threats. . . . So far, two of my employees were murdered, the first worked in the Computer Department, and the second was a guard. Three of our drivers. . . were murdered and three others were injured."

He stopped adding to the diary last summer. "It was too much to write about tragedies and bombs and killing," he said. "When I would type, I would cry. I would live it again and again." Besides, groups in the West tried to recruit him to oppose or support the American-led occupation. But his party was the library and the patrimony of the nation. "I didn't want to be a weapon, a tool of this or that group," he said.

Eskander believes the library's mission is not secondary to political reform but a central strategy in building a new Iraq. "We need to bridge this Sunni-Shia, Arab-Kurdish division by providing symbols of common historical memory," he said.

"He is incorruptible," said Jeffrey B. Spurr, an archivist and specialist in Islamic and Middle Eastern architecture at Harvard's Fine Arts Library, "though many people have tried to box him in. He is one of a handful of people who are genuinely centered, in the best possible way - not fanatics, but with a clear vision of the good, and amazingly, are fearless enough to pursue it."