State of our unions 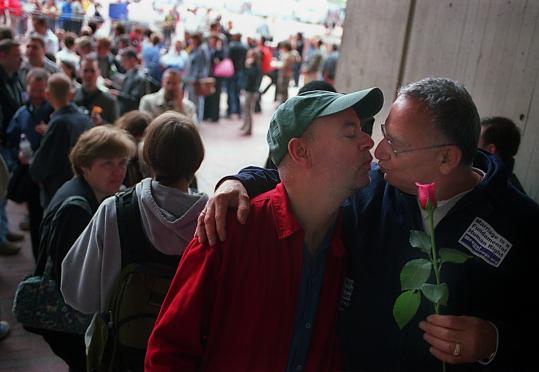 After eight years without plague, mass exodus, or the sky falling, gay and lesbian marriage is de rigueur in the Commonwealth.

Yet even as more of us have now danced at the weddings of our gay and lesbian family members and friends, what many don’t know is that today, marriages between same-sex couples still aren’t the same as those of their straight counterparts. As a Boston lawyer who has worked within the gay and lesbian community on relationship issues since long before the arrival of same-sex marriage, I know that many of the pre-gay-marriage era legal complications and limitations remain.

The elephant in the room for gayweds (my term for gay and lesbian weddings and the parties thereto) is DOMA. In 1996, when it looked as if Hawaii would permit same-sex marriages and there was fear of a US constitutional amendment, Congress enacted the Defense of Marriage Act, defining marriage for all federal purposes as between a man and a woman, and providing that states could do the same. By a referendum vote last month, North Carolina joined the overwhelming majority of states, amending its constitution to say that the only domestic union recognized in the state is marriage between a man and a woman. Therefore, if a lesbian couple weds in Massachusetts and later moves to North Carolina with their children, only the spouse who gave birth to the children would be considered their mother. If a member of that same couple wanted to make decisions for her spouse during a medical emergency, North Carolina would not allow it.

State laws against gay marriage can affect inheritances, too. In another case, a married lesbian couple had a son - the biological child of one, the legal child of the other under Massachusetts law. But Florida law prevented that child from inheriting hundreds of thousands of dollars through the legal mother because he was not considered her child for purposes of her late father’s estate.

At the federal level, because of DOMA, same sex spouses aren’t eligible to receive the pension benefits normally given to a surviving spouse. So when Massachusetts Congressman Gerry Studds died, his spouse, Dean Hara, was denied Studds’s congressional pension benefits. Hara is a plaintiff in a discrimination case in which a US appeals court in Boston ruled last month that DOMA was unconstitutional.

Complications also cloud divorce. For one thing, the same transfers of assets and property that are nontaxable between straight divorcing couples are in fact taxable in gay cases. In one of my cases, a divorcing gay couple had to pay $250,000 in capital gains taxes to transfer ownership of a Provincetown house from one husband to the other - a straight couple divorcing wouldn’t have faced that tax. Even more basic is that gay spouses have no recourse to a divorce court in most states because those states didn’t recognize the marriage in the first place.

Interestingly, as I’ve seen in my law practice and among friends, divorce among gay couples can be different from straight divorce because over and above the personal pain, some divorcing couples feel a sense of embarrassment at letting down a community that has fought so hard to gain the right to marry.

Still, our era of same-sex marriage is a surprising turnabout. I saw a clear reflection of that at a recent gathering of gay and lesbian friends. Rather than discussing the next Madonna tour or the new hot South End bistro, they were debating the merits of Wayland versus Wellesley schools, and whether their kids should attend private school.

Yes, we’re older now, but 10 years ago my friends and I wouldn’t have imagined having conversations like these. The group was representative of couples who’ve married here over the past eight years: homes in the suburbs and lives filled with parent-teacher meetings, car pools, soccer, and nannies.

Gays and lesbians who felt like radicals as they advocated for marriage rights now more closely reflect the norm of a 1950s sitcom family, with their suburban homes and soccer games to attend. Yes, “Modern Family’’ lives all around us in Massachusetts, and it is spreading, albeit with roadblocks along the way.

Peter F. Zupcofska is a lawyer at Burns & Levinson LLP in Boston.